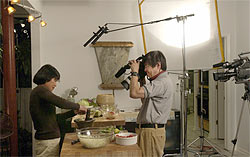 Not many years ago Thai cuisine was relatively unheard of. Few people could even locate Thailand on a map; and many confused Thai food with Chinese cuisine.

But over the last decade with the move towards healthier eating, Thai restaurants have sprung up in all parts of the world.

Thai cooking classes and Thai cookbooks can now be found everywhere. Learning how to cook Thai food is an art that everyone seems to want to master.

But finding good recipes, locating unique spices and ingredients and learning Thai cooking techniques discourage many cooks from even trying

Dim Geefay was born in Thailand. There she learned the art of cooking delicious Thai meals from her mother who followed Thai recipes handed down to her by her mother.. Her mother's recipes were the delight of the entire family.

In the ensuing years Dim has become a sought after authority on Thai Cuisine. She has hosted cooking classes in America and in Thailand.

The idea for Dim's Thai Cooking Video Series was the result of a lifelong passion for cooking.

Dim Geefay was born and raised in Thailand where food is a national passion.

As a child she loved spending time in the kitchen helping her mother prepare the family meals.

In time, Dim learned how to prepare the recipes that her mother had learned from her grandmother

Back then, finding Thai ingredients in a small American town was not easy.

So Dim would travel to San Francisco and Los Angeles whenever she could to stock up on the Thai ingredients. She worked hard to keep Thai food on the dinner table.

A lot has changed since then. Asian stores and supermarkets are now on the corners of even smaller towns and finding all the ingredients to cook an authentic Thai meal is now an easier task.

is an excellent way to learn all the nuances of Thai cooking; and in Dim's 27 minute Thai cooking video you will not be disappointed.

Dim will take you through the process of preparing an entire four course Thai meal that is guaranteed to impress your guests. In this easy to follow Thai cooking video she guides her daughter, Cathy, through the same steps that her own mother traced many years ago when Dim was a little girl.

This informative and easy to follow instructional Thai cooking video is just $19.99 plus tax (CA only) . Free shipping within the US. (Media mail)

Or skip the hassle of having to shop around for Thai ingredients to make your 4 course Thai meal. Order the Thai Starter Kit, which contains the instructional video AND most of the items you might not find at your local supermarket and save yourself a lot of time.

Looking for a unique gift for a special occasion? Dim’s Thai Gift Basket makes an attractive, novel and never-to-be-forgotten gift. We’ll ship it direct to that person on your shopping list and customize it with a personal message

This story has been posted in the following forums: : Headlines; COS - Thailand; Cooking; Television; Third Goal