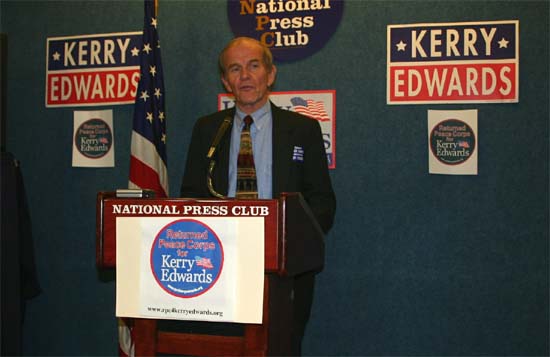 I became involved in and concerned about what was happening when we started talking about Iraq. Back in 2002, I said to myself: "Look. This doesn't connect." And as we have seen, things have gotten worse. We have gone after, in Iraq, a generalized target. Iraq had nothing to do with the Al Quida attacks and the administration, rather than focus on the specific group that was responsible, pursued a shotgun approach and is out shooting in all directions at its perceived terrorist enemies. This is a strategy, as we have seen, that is expensive - expensive in dollars, expensive in lives and, as we saw with prison problems, it has been very expensive in terms of America's moral standing around the world. As a diplomat, I am personally appalled at what has happened. All the things we did as diplomats, all of the things we stood as Americans were completely subordinated to what they thought was necessary to find the necessary intelligence.

We need to express our concern, we need to be able to explain why there needs to be change in Washington.

People ask: "Is Kerry going to be better? " I think with the foreign policy debate held on September 29, he has been able to hone in on a very specific message which can give everybody a great sense of confidence that this is a man who will stand up for what it is that Americans have traditionally believed in.

Ambassador Parker W. Borg is a retired American diplomat who has worked on foreign policy issues for forty years. He is presently an independent consultant in the Washington DC area. He served as US Ambassador to the Republic of Iceland from 1993 to 1996 and to the Republic of Mali from 1981 to 1984. He began his government service as a Peace Corps volunteer in the Philippines in 1961.