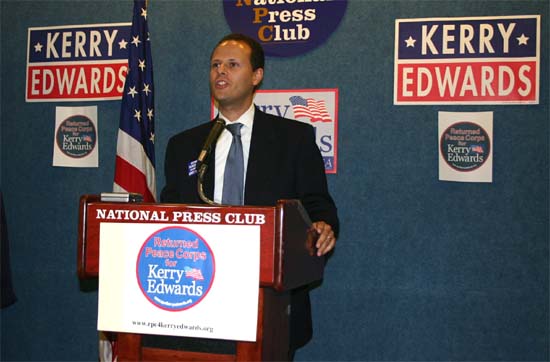 It is very gratifying to see so many RPCVs and former staff here in the audience today who share our concerns about the Bush Administration and President Bush himself and how he has taken our country in what we believe is the wrong direction.

A couple of years ago President Bush proposed doubling the amount of assistance going to key high-performing developing countries through a program called the Millennium Challenge Account (MCA). At the time President Bush promised that this new program would be funded from new monies instead of taking monies away from existing programs. The fact is, that President Bush's budget for this year and for last year, paid for the new program at the expense of existing programs for development - programs that otherwise go to poor countries that are striving themselves to pull themselves out of poverty.

The MCA also suffered from other problems. The White House originally proposed that the new program did not have a role for women. In fact, the legislative language that they proposed to the Congress didn't even mention the word women or gender not even once through the entire proposal. It was only through the diligent efforts of Democratic Members and other NGOs, we would insert into development for this program. And now women sit at the table of the board of the MCA and also in discussions in the field.

The MCA also initially and still today overwhelming focuses its programming on nurturing businesses and opening markets as a sole recipe for lowering poverty rates in Africa, Asia, and la. They don't seem to realize that although business development is necessary, it alone will not assure the poor will get jobs, education or other opportunities. Exporting trickle-down economics, a policy which failed in this country 20 years ago, to developing countries across the globe is a blatant disregard for countries such as Bolivia.

I believe the Kerry Edwards team understands what matters. Senator Kerry has repeated talked about acting with others to accomplish shared goals. He has also proposed policies that help provide women the same economic and education opportunities as men. Finally, I believe that Kerry Edwards know the difference between creating new markets for wealthy corporations and new jobs for the poor.

I believe that Kerry Edwards is what America needs. In fact I think it is what the world needs in a new administration..

Mr. Paul L. Oostburg Sanz is the Deputy Chief Counsel for the Democratic Staff of the Committee on International Relations in the United States House of Representatives. In this capacity, he provides strategic and procedural counsel to Congressman Tom Lantos of California, the Ranking Democratic Member of the Committee, and other Members on legislation moving through the Committee and on the House Floor. Mr. Oostburg Sanz's legislative portfolio includes the Western Hemisphere, the Millennium Challenge Account, Peace Corps, and other issues related to foreign assistance.

Before joining the Committee in May 2001, Mr. Oostburg Sanz clerked for a U.S. federal district court judge in Puerto Rico for nearly two years. He has also worked on conflict resolution issues for the U.S. Embassy in Liberia and on democracy and governance programs for the USAID Mission in Mozambique. Before beginning his graduate studies, Mr. Oostburg Sanz conducted political party training in South Africa before the first-ever, all inclusive 1994 national elections, and served in the Peace Corps in Guinea-Bissau teaching English in secondary schools. He holds a Juris Doctorate degree from Harvard Law School and a Master in Public Affairs from Princeton University.

Paul, Thanks for the help in getting the Legislation moved forward on Ombudsman's office at Peace Corps. Good Luck in your campaigning efforts for Democrats.