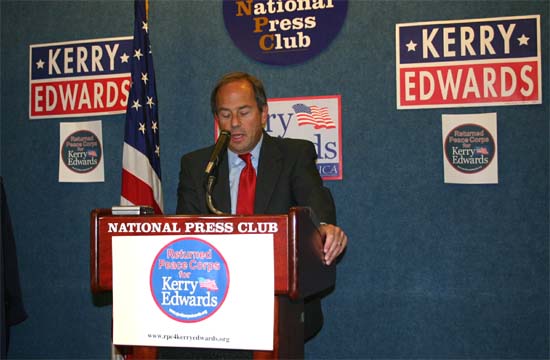 Thirty-four years ago, I joined the Peace Corps to serve our country and its values. Many of us working by ourselves were able to make a difference in a local community. Together, all Peace Corps Volunteers helped change the way the world looked at the United States - from just a great power to also an idealistic one, from a country that fought wars to one that also helped the world's poorest.

Like veterans and diplomats, Returned Peace Corps Volunteers (RPCVs) as a group have tried to keep the organization we served above politics. But this election may be the most important of our lives, and we cannot sit it out.

I worked in Malaysia, a country then fighting an insurgency, and those of us who have been in the middle of civil wars know that genuine security is only possible with allies and friends. We are a very strong nation, but we cannot win the war against terror if we fight alone. We cannot win if we dismiss the very international institutions - like the UN - which we established to stop conflict. We cannot win if we talk about democracy but support a party and not the democratic process. This has been the strategy of the Bush Administration, and the signs of failure are everywhere.

I have traveled in many parts of the world in the last few years. I don't recall a time when so many friendly people told me that they don't like the United States anymore. If the evidence was merely anecdotal, one could dismiss it, but last August, the University of Maryland did a global survey of nearly 35,000 people in 35 nations. The results showed that the world is beginning to change the way it looks at the US because of President Bush. Asked about Bush's foreign policy, a majority or plurality in 30 countries said it made them feel "worse" about the United States.

On average, and in every region of the world, 53% said Bush's policies made them dislike the U.S., while 19% said it made them feel better - a ratio of nearly 3:1. Of our two closest neighbors and largest trading partners, Canadians said that if they could vote, 61% would vote against Bush, and 16% in favor. 80% of Mexicans oppose Bush.

Let me stress this is not chronic or knee-jerk anti-Americanism. This is due to President George W. Bush, and you can see that in the polls of two very close friends over a brief period. In 1999, 83% of the British people had a favorable view of the U.S.; that is only 48% today. In Germany, in 1999, 78% were positive to the US; 38% today.

Our friends are distressed with President Bush's arrogance and unilateralism. Today, they can distinguish between Bush and the U.S., but four more years of President Bush could irrevocably stain the image and the influence of the United States in the world. And if that occurs, we will never again be safe - no matter how strong. That is why we who have served our country's pursuit of peace, decided to raise our voices for change. We cannot afford "four more years" by President Bush. It will be hard enough to contemplate four more months.

We need and the world needs new leadership for America. John Kerry and John Edwards will provide that leadership. They will unleash the energy and idealism of America. Our allies and friends are so hungry for an America that will show some respect, they are likely to respond with an abrazo, an embrace.

This election is about the future of America and its leadership in the world. A vote for President Bush means that we will be fighting virtually alone a rear-guard insurgency. A vote for John Kerry will be a vote for a more secure America in a grand cooperative alliance that will be faithful to our values and interests.


About Robert A. Pastor

Robert A. Pastor was a Peace Corps Volunteer in Sarawak, Malaysia (1970-72) and was the recipient of the Sargeant Shriver Humanitarian Service Award of 1995 for a returned peace corps volunteer for his work on behalf of democracy in the developing world. He is currently Vice President of International Affairs and Professor of International Relations at American University, but this statement is personal and does not reflect the views of any institutional affiliation. Dr. Pastor was the Director of Latin American Affairs on the National Security Council from 1977-81 and has been a consultant to the Departments of State and Defense. From 1985 until coming to American University in 2002, Dr. Pastor was a Professor of Political Science at Emory University and Fellow and Founding Director of the Latin American Program and the Democracy project at the Carter Center. He is the author or editor of fifteen books, and was a Fulbright Professor in Mexico and Visiting Professor at the John F. Kennedy School of Government. He was nominated Ambassador to Panama in 1994 and was the Senior Advisor to the Carter-Nunn-Powell Mission to restore constitutional government in Haiti in 1994. Dr. Pastor received his Ph.D. in Political Science from Harvard University.


When this story was posted in October 2004, this was on the front page of PCOL: