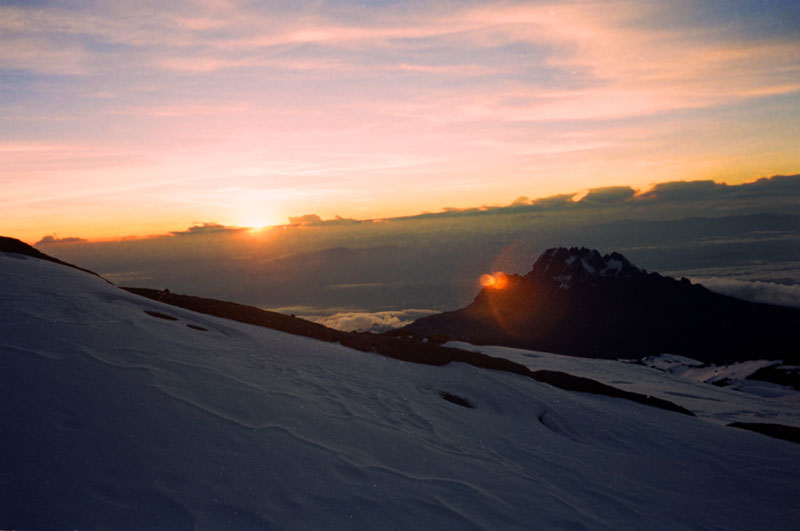 ''It took 29 people to get four of us up that mountain," said Musk, explaining that the Tanzanian government requires climbers to hire porters. The party included guides, cooks, and bearers who carried tents, food, gear, and even a chemical toilet.

When Wrentham resident Pam Musk says ''Nimependa wanyama siku wote," she means it from the bottom of her heart.

The director of the Massachusetts Audubon Society's Stony Brook Wildlife Sanctuary in Norfolk, Musk learned Swahili in 1983 while doing a semester in Nairobi through St. Lawrence University. She became even more proficient during a 1985 through '87 tour with the Peace Corps in Kenya. Swahili came in handy nine months ago, when Musk returned to Africa to climb Mount Kilimanjaro.

As a Peace Corps volunteer, Musk taught high school biology, physics, home economics, agriculture, and English, and coached soccer. ''It was the most rewarding experience of my career," she said.

Teaching began early for Musk, 41, who spent her teenage summers as an assistant nature counselor at a day camp in Connecticut, where she grew up.

''My father was a Scout leader," she said. ''I think some of this comes from wanting to have a connection to him. I was 18 months old when my parents died in a car accident."

Musk and her siblings were raised by their grandparents with help from their extended Italian family. ''Everybody just kind of chipped in."

Musk, in turn, cared for her grandmother after college and her stint in the Peace Corps. She taught high school while earning a degree in environmental studies. She came to Stony Brook eight years ago and has been director the last six.

Musk's duties include raising funds, making speeches, managing the property, and occasionally chasing chipmunks out of the nature center building.

Her talent at shooing chipmunks aside, she has learned that although she may be the boss, the animals are really in charge. Musk recalled a nature walk for sanctuary donors led by famed ornithologist Wayne Petersen three years ago.

As some 20 people paraded along a boardwalk over a pond, ''a mink appeared running toward us with a duckling in its mouth," she said. ''We all froze, assuming that the mink would take a turn or jump into the pond. Instead, she headed straight for us. Apparently getting the duckling to its waiting young was more important than the crowd of people in the way."

''It took 29 people to get four of us up that mountain," said Musk, explaining that the Tanzanian government requires climbers to hire porters. The party included guides, cooks, and bearers who carried tents, food, gear, and even a chemical toilet. ''After a day of hiking, we'd walk into the mess tent and there would be fruit and vegetables, coffee, tea, and popcorn."

Each person in the group was assigned a guide in case someone had to turn back. ''At about 15,000 feet [one woman] had trouble with pounding headaches, disorientation, and nausea. The guides made the decision for her to go down."

Musk always knew what was happening. ''When the guides were having a conversation about us, what was going to happen, or [expressing a concern] I could understand."

Musk exercised on a treadmill and an elliptical trainer daily for 10 months before the climb, but knew even that would be no guarantee.

''The person who's in the best shape of your group could be the one who can't handle the altitude," she said. ''We took the longest route because we wanted to give our bodies a chance to acclimatize."

The additional time also gave the group of naturalists more time to survey the landscape, which varies from tropical rainforest at the base to snowcapped peak.

Musk said she really has no grand desire to scale another mountain. ''After having done this, why would anyone want to go higher?"

This story has been posted in the following forums: : Headlines; COS - Kenya; COS - Tanzania; Climbing