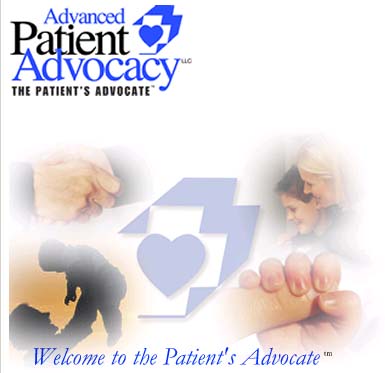 Any person taken to a hospital needing care has to be treated, regardless of ability to pay. In hospitals that hire Mr. Groner's company, the Advanced Patient Advocacy representative is called in when a patient doesn't have insurance. "The company does an outstanding job. They have a genuine care for the folks they assist," said JJ Justus, director of patient financial services at Johnston Memorial Hospital in Smithfield, N.C.

An angel in the ER: Firm helps patients who can't pay
By WENDI WINTERS, For The Capital

Overlooking the Chesapeake Bay is a sleepy-looking office tucked inside the first story of a small, sun-bleached building in Bay Ridge.

The business inside the former gas station boasts 120 employees in 11 states from Maine to Florida and as far west as Oklahoma. Though some people are skeptical about the existence of angels, Advanced Patient Advocacy must seem like one to the 30,000 patients who received its help last year.

But it's a very successful angel on a purely earthly plane: APA produced $5.4 million in revenue last year. Inc. magazine named it the 166th-fastest-growing company in the nation, but none of its customers are in Maryland.

"A prophet is never recognized in his own land," laughed company founder and CEO Kevin Groner. "I'll eventually get here."

Any person taken to a hospital needing care has to be treated, regardless of ability to pay. In hospitals that hire Mr. Groner's company, the Advanced Patient Advocacy representative is called in when a patient doesn't have insurance.

"We are an advocate," he emphasized. "We do not charge the patients. We hold their hand and identify potential payers to reimburse the provider - the hospital - for its service. When the hospital is paid by the government, then we are paid a flat fee or consignment fee."

The company screens every referred patient for eligibility in myriad programs. For example, APA representatives handle paperwork stressed-out parents might overlook when a sick newborn arrives, like adding the baby to the mother's existing Medicaid number, making an application for baby and mom if no benefits exist, and initiating Supplemental Security Income claims for sick infants.

What APA is not, is a collection agency. If a person has the means to pay the tab for services, the case is handed back to the hospital.

From his office in Oklahoma, COO Matt Miano crunched some statistics.

"The company does an outstanding job. They have a genuine care for the folks they assist," said JJ Justus, director of patient financial services at Johnston Memorial Hospital in Smithfield, N.C.

Hospitals use APA instead of hiring in-house employees to handle the patient advocacy caseload because they're too busy collecting money.

"APA turns around a lot of indigent patients into financial gain for the hospitals and removes the burden from the patient," Ms. Justus said. "It works with Hispanics and migrant workers; it works with social service departments. We're just real happy with their service and they are a true partner.

"For them it's not all about the money."

Tall and talkative, Mr. Groner was born and raised in Baltimore. His mother was a physician's assistant, and he recalls growing up sitting in doctors' offices while his mom worked.

At Loyola Blakefield High School, the Jesuit priests inculcated in him a dedication to a life in service to others. In college another aspect of his personality evolved: a taste for travel.

College wasn't completed in a neat four-year package: There was an extended period in Maui as a windsurfer, and a Europass got a heavy workout during a long trip to visit his future wife, Karen, a part-time reading specialist in county public schools, who was spending a semester studying in Wales.

He snapped up an offer to work for Merrill Lynch before graduating with a degree in business and economics from Western Maryland College. When not working as a stockbroker, he volunteered with Beans & Bread, a charity for the homeless.

"It was a place where people could find work, instead of just getting free food. It was an extremely challenging thing to do, as there were lots of social issues."

After the stock market crashed in October 1987, he left the company to take a job with Lindley Package & Box as a vice president of sales and marketing. He traveled around the country, motivating his 150 employees.

Still, something was missing. He wanted to be more fully immersed in helping other people, not tethered to his 9-to-5 corporate world.

Newly married, he and his wife decided to join the Peace Corps and applied in late '89. In 1992 they were accepted for a spot in Papua, New Guinea.

He almost didn't make it. Since the couple would be hundreds of miles from medical care living with a pre-Iron Age tribe of 75 people in primitive conditions, the Peace Corps decided his wisdom teeth had to come out.

The doctor removing his teeth managed to break his jaw. Instead of spending his last weeks in the U.S. gobbling up steak, chocolate and other culinary treats, Mr. Groner had his mouth wired shut.

During the two years overseas, the couple feels they made an impact. Before their return stateside in 1994, the Groners traveled throughout the Pacific rim, seeing villages and towns that are now gone - wiped out by last December's tsunami. Their memories also include nasty bouts of malaria, dysentery and typhoid.

"When we came back, we stared at food in supermarkets," Mr. Groner sighed.

Back in the United States, Transcriptions International hired him as a marketing consultant, exposing him to the future of electronic medical records. From there, he worked with a company similar in scope to APA before striking out on his own in 2000.

Mr. Miano came aboard right away, and Mike Wilmoth arrived eight months later. Vicky Mondin, office manager and jack-of-all-trades, arrived in the fall of 2001 - when 15 people were on the payroll and Mr. Groner's dad was doing the books.

The company began in a house off Forest Drive, and moved briefly to City Dock before the move to Bay Ridge. Today its officers and employees are scattered around the country.

Company officers and employees communicate constantly via e-mail and conference calls. Ms. Mondin said APA is close to setting up a webcasting system so they can talk more effectively.

Mr. Groner considers the company's biggest asset to be its employees. Its turnover rate is less than 20 percent.

"We have incredible individuals who work for us. Ultimately, they're the reason for our success," Mr. Groner said. "We have a positive culture; we're not yellers and screamers. We do everything possible to help employees find their wings. We don't want work to be a four-letter word."

Wendi Winters is a freelance writer living in the Broadneck Peninsula.

This story has been posted in the following forums: : Headlines; COS - Papua New Guinea; Service; Business; Medicine