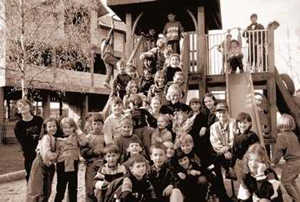 Christensen spent the past 14 months in Bosnia working with the American Refugee Committee to build 280 playgrounds, sports fields and basketball courts. She worked in both the Muslim-majority portion of Bosnia, called the Federation, and the Serbian-majority side of the country, known as the Serbian Republic.

In a war-torn country like Bosnia, where do the children play?

While many foreign-aid organizations focus on repairing and rebuilding homes and schools in the aftermath of wars, few consider that outdoor environments, such as parks, forests and playgrounds, are also often destroyed.

LSU alumna Karla Christensen, a native of Abita Springs, has found a unique way to work for peace and an increased quality of life for people in poverty-stricken and war-devastated countries.

Christensen spent the past 14 months in Bosnia working with the American Refugee Committee to build 280 playgrounds, sports fields and basketball courts. She worked in both the Muslim-majority portion of Bosnia, called the Federation, and the Serbian-majority side of the country, known as the Serbian Republic.

Christensen said projects like these help improve the American Refugee Committee's relations with both groups, thereby helping to foster peace. In addition, the playgrounds will serve as places for Muslim, Croatian and Serbian children to play together. She said the program, which works to bring opposing groups of the population together through play, is the first of its kind.

"We built each playground in two weeks, so we were able to make an impact very quickly," Christensen said. "This is one of the first times playgrounds have been used as the main focus of an American aid program."

She said that for her, the most important reason for designing and building the playgrounds was not political.

"Seeing the children's happy faces and knowing that a little bit of their childhood has been given back to them makes this program invaluable," she said.

Christensen said nothing could have prepared her for the destruction she encountered in the former Yugoslavia. Every-thing from skyscrapers to small villages had been destroyed, and fields and forests where children once played were now littered with land mines.

Because of the devastation, Christensen said her goal was not merely to build a few swings, but to create a safe play environment in which children could develop physical, social and cognitive skills. She strove to design facilities that would challenge children - even those in wheelchairs - to use their imaginations.

To get an idea of what the local children wanted, the American Refugee Committee asked the Bosnian children to draw pictures of their ideal play areas.

Christensen said she and her team examined some 180 drawings and found that most pictured boats. So they designed a kind of wooden "boat," each standing about seven feet tall and consisting of a captain's wheel, a ladder, two slides, a ramp, parallel bars, a tire wall for climbing and a fire pole for sliding. Each "boat" was shaped with a bow and stern and had a roof and interior tables and chairs.

The sports fields and basketball courts, designed for teens, were built adjacent to the playgrounds. All of the work was completed using local materials and contractors. The $3.1 million project was funded by USAID, an American governmental organization that provides funds to various international aid organizations while also sponsoring some projects of its own.

Christensen graduated from Tulane University in 1987 with a bachelor's degree in international relations and from LSU in 1995 with a master's degree in landscape architecture. Her interest in building playgrounds in underprivileged nations began when she joined the Peace Corps in 1989. She remained with the corps until 1992, designing various types of play areas in Costa Rica and Morocco.

When she enrolled at LSU, she decided to study landscape architecture because of her interest in outdoor environments. As part of her thesis research, she traveled to Venezuela to design and build playgrounds. After graduation, she received a Fulbright grant and continued her work in Malta before going to work in Bosnia with the American Refugee Committee.

This story has been posted in the following forums: : Headlines; COS - Costa Rica; Architecture; Landscape Architecture; Playgrounds; Bosnia