Ronald A. Schwarz writes: Who are the First Volunteers? 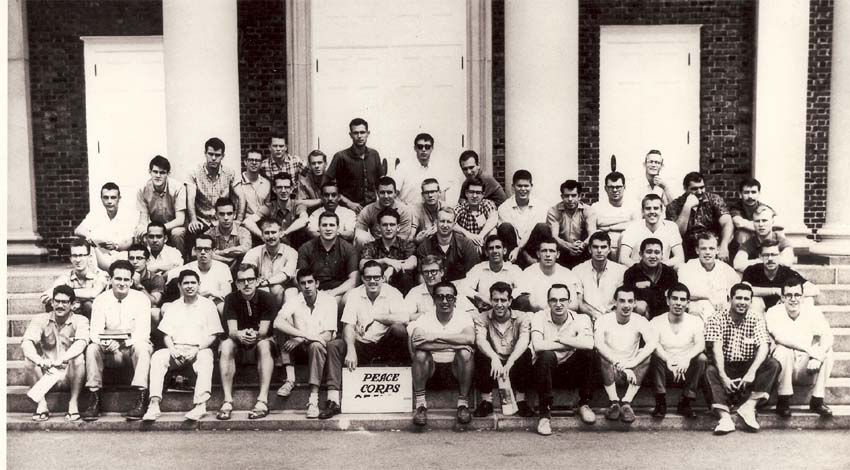 "As the Peace Corps prepares to celebrate its 50th anniversary, the agency's account of its early history is flawed," writes Colombia RPCV Ronald A. Schwarz. "Its website proclaims that the first group of Peace Corps volunteers is Ghana I. In fact, the first Peace Corps volunteers were, and are, the members of a group known as Colombia I. This essay presents the evidence and asks the agency to modify its misleading statements, correct the historical record, and publicly recognize Colombia I as the first group of volunteers. While the Peace Corps can select historical highlights to support recruitment and information campaigns, it has a more important obligation to present an accurate account of its past. Failure to so would discredit the agency and be out of line with the spirit of the Peace Corps."

Ronald A. Schwarz writes: Who are the First Volunteers?

Caption: Members of Colombia I during training at Rutgers University in August, 1961.

The Peace Corps at 50: Who are the First Volunteers?

The Report to the President on the Peace Corps

The day after his inauguration on January 20th, 1961, President Kennedy asked his brother-in- law, Sargent Shriver to head a task force to assess the feasibility of a Peace Corps. One month later, Shriver delivered "The Report to the President on the Peace Corps," and on March 1st, JFK signed Executive Order 10924 which established the Agency "on a temporary pilot basis."

Shriver's Report describes what the Peace Corps would do and how it would operate. It states that a "volunteer" is a person who passed an initial selection process and entered into a training program. The section on ". . . the Terms of Service" notes that "From the training period throughout his term of service, the Peace Corps volunteer would be subject to immediate separation from the service and return home."

The terms frequently used in connection with the separation process while the agency operated under Executive Order 10924 are "selected out" and "deselected." They underscore the policy that trainees are "volunteers" who are tested and evaluated, and can be separated from service at any time. 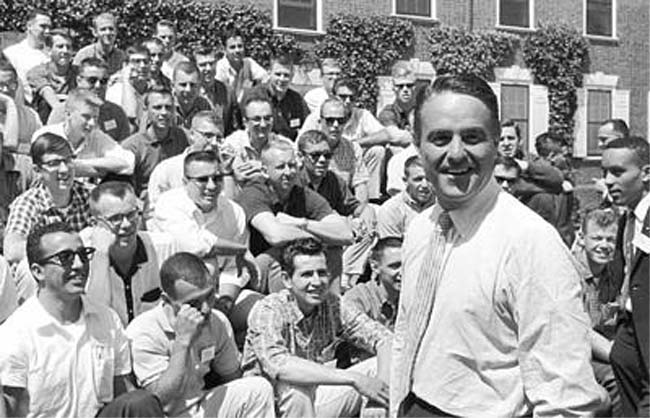 Caption: Founding Peace Corps Director Sargent Shriver with members of Colombia 1 at their training facility at Rutgers University in June 1961 The NY Times featured this photograph of Shriver addressing the group in New Brunswick, NJ.

In the spring of 1961, thousands of men and women completed questionnaires and mailed them to Washington. The applicants were then invited to take entrance exams at centers across America. In April and May the President announced the first two Peace Corps projects - Road Surveying in Tanganyika and Community Development in Colombia.

In mid-June, Peace Corps staff telephoned the men who qualified for the Colombia project to determine their availability. On June 15th the first wave of candidates – those who had verbally agreed to report for training - received a telegram: "Congratulations on successfully completing the initial requirements for the Peace Corps." The telegram was followed by a letter signed by Sargent Shriver dated June 16, 1961. It begins: "Dear Peace Corps Volunteer."

The volunteers selected for Colombia arrived at Rutgers on June 25th. Training officially began the following day at 8:00 AM EDT. The group destined for Tanganyika started in El Paso two hours later. In the afternoon of the first day Sargent Shriver addressed the Colombia volunteers in New Brunswick, N.J. Dozens of reporters, photographers and TV crews were present.

The next morning (June 27th) The New York Times, the Washington Post and countless local papers published articles and photographs of Sarge and the volunteers. The headline on the front page of The New York Times reads: "Peace Corpsmen Introduced to Tasks and Taskmaster." It features a photograph of Shriver addressing a group of young men in New Brunswick, N.J. The article begins: "The first two contingents of Peace Corps volunteers assigned to overseas projects began intensive two month training courses today at Rutgers University here and at Texas Western College in El Paso."

The Washington Post story about the first day at Rutgers event includes Shriver's announcement of a new project for Ghana. It notes that the "Ghana group will be the third Peace Corps unit." 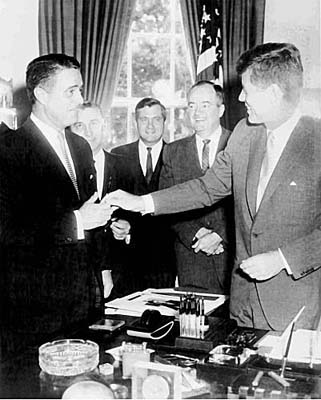 The legislation that established the Peace Corps on a permanent basis – the Peace Corps Act – was signed by President Kennedy on September 22, 1961. On the day JFK signed the Act, three groups of volunteers were in their country of service – Colombia, Ghana and St. Lucia.

The original Peace Corps Act includes a section on "Volunteer Training" - SEC. 8. (a). It states that all provisions of the Act apply to applicants during training prior to enrollment and that "the respective terms ‘volunteers' and ‘volunteer leaders' shall include such applicant during any such period of training."

The Rest of the Story 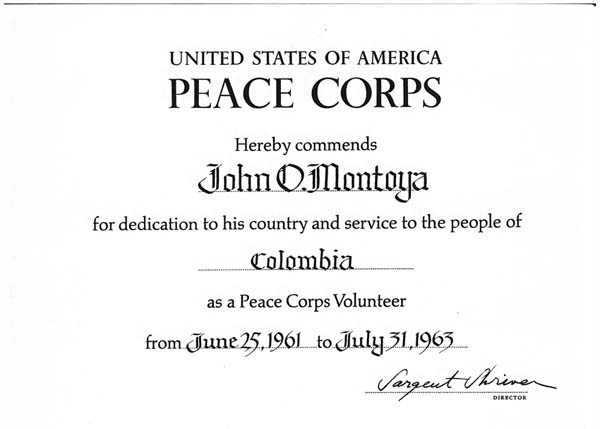 On June 25, 1963 Colombia I volunteers completed two years of service. Months later they received certificates signed by Sargent Shriver. The certificate includes the name of the volunteer and commends him "for dedication to his country and service to the people of Colombia as a Peace Corps Volunteer from June 25, 1961 to June 26, 1963."

In connection with the 25th Anniversary Celebration (September 18 – 21, 1986), Peace Corps headquarters published a booklet that lists, in chronological order, the early Volunteer Groups. Colombia I is the first, Tanganyika I is second and Ghana I is third. A footnote explains that Colombia is first because of the time zone difference between the East Coast and Texas (where the Tanganyika group trained).

In November 2010, Rutgers University hosted a two day ceremony and unveiled a bronze plaque that begins "Rutgers . . . was selected for the training of America's first Peace Corps Volunteers, a group that served in the Republic of Colombia." The University's decision about the wording was made after a careful examination of the documentary evidence by the Rutgers administration and months of discussion with returned volunteers from Colombia I. The Deputy Director of the Peace Corps spoke at the opening ceremony and at the unveiling of the bronze plaque on November 5, 2010.

Reference to Ghana I as the "first group of Peace Corps volunteers" should have stopped in 2010 with the publication of Robert Klein's book, "Being First: An Informal History of the Early Peace Corps." In Lowther's review of the book, he notes that "Klein and his Ghana I comrades make no claim to being anything other than the first PCVs on foreign soil." And, arrival on "foreign soil" never was, and is not, the criterion that establishes "volunteer" status. 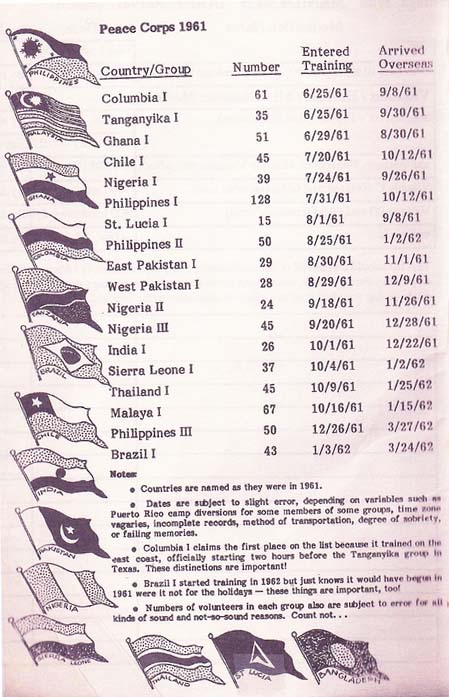 In spite of the evidence to the contrary, the Peace Corps' 50th anniversary website is filled with misleading references to Ghana I. One section displays a decade by decade summary of historical milestones. The one for August 1961 notes that, "The first group of 51 Peace Corps Volunteers, Ghana I, arrives in Accra to serve as teachers." While one milestone notes that in June 1961 "Tanganyika I and Colombia I begin training for service," it does not refer to them as "volunteers."

Another feature of the 50th anniversary website is an Interactive Timeline that features Ghana under the heading "First Peace Corps Volunteers." It makes no mention of Colombia or Colombia I.

It would be easy to ignore or dismiss an isolated error or a misleading statement about "first volunteers." However, the frequent references to Ghana I as "the first volunteers," make it difficult to view the statements as casual errors or mistakes.

After a review of the website, the Friends of Colombia sent the Peace Corps a letter and timeline of events with references. It asked the agency to update its website and recognize Colombia I as the first Peace Corps volunteers in its public statements." The letter has not been answered nor acknowledged.

The Peace Corps should delete or modify misleading statements on the 50th Anniversary website. And, it should affirm the status of Colombia I as "the first Peace Corps volunteers" in its publications and presentations for the 50th celebrations. While the Peace Corps can select historical highlights to support recruitment and information campaigns, it has a more important obligation to present an accurate account of its past. Failure to so would discredit the agency and be out of line with the spirit of the Peace Corps. 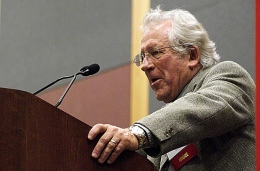 Ronald A. Schwarz was Peace Corps volunteer in Colombia I and later became an anthropologist. He was a faculty member at Williams College, Colgate, Tulane and the Johns Hopkins University, and the Director of Development Solutions for Africa (Kenya). He is co-editor of three books and is currently writing a book about Colombia I, "Kennedy's Orphans."


When this story was posted in September 2011, this was on the front page of PCOL:

This story has been posted in the following forums: : Headlines; COS - Colombia; COS - Ghana; Headquarters; 50th; Speaking Out; Shriver; President Kennedy

Dear Peace Corps Org. I was in Grade 4 when we had a PCV English Teacher, he was Mr Derek W. Hulse. He was our teacher from Grade 4 until we graduated in Grade 6 ( from 1964 to 1966) He was very good English teacher. He was my chaperone together with his lady friend Nancy a fellow PCV when I won declamation contest in my school! The prize was to watch the film The Sound of Music! He was the one who wrote my salutatory address when I graduated from grade six. Our path didn't cross anymore from the time they left my city, Zamboanga city Philippines, I became a Nurse, worked in the Middle East but never had the chance to go to the US because I got married raised a family. Noe I am retired and how I wish I can get in touched with him, or if he has a family ? I was ed to say my thanks and how he touched my life as a young girl of ten then. I am in Facebook, too. Hoping I can hear from your prestigious organization !