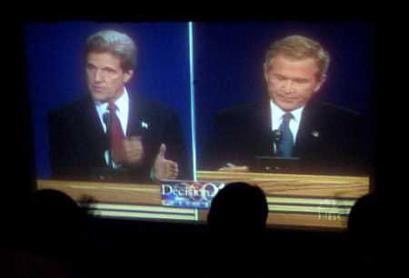 Kerry scored a solid success in the first presidential debate. By more than two to one, voters said that Kerry, not Bush, did the best job in that debate; 60 percent declared Kerry the winner, and 23 percent said Bush won.

(CBS) In the days after what most voters saw as a clear win for him in the first presidential debate, Senator John Kerry has bounced back -- his overall ratings have improved and the presidential race has tightened once again. The Democratic candidate and President George W. Bush are tied: 47 percent of likely voters support Kerry, and 47 percent support George W. Bush. In a CBS News Poll conducted the week before the debate, the Bush-Cheney ticket held a nine-point lead over Kerry and his running mate John Edwards among likely voters.

Kerry and Bush are similarly tied among registered voters. 47 percent support Kerry and 47 percent back Bush. Kerry trailed Bush by eight points the week before.

Kerry and Bush were also very close in this poll in interviews conducted in the 15 battleground states, as they were before the debate. 48 percent of likely voters favor Kerry, 46 percent Bush. That suggests that much of the post-debate change took place in non-battlegrounds, those states without campaign ads or visits from the candidates. The debate may have been the first opportunity for those voters to see both candidates and campaigns make their case since the conventions.