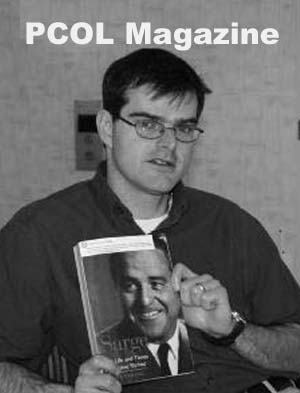 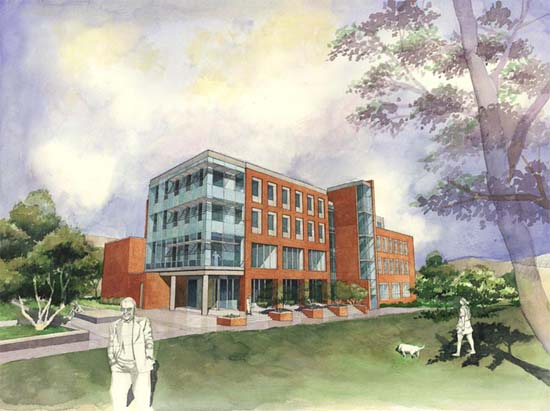 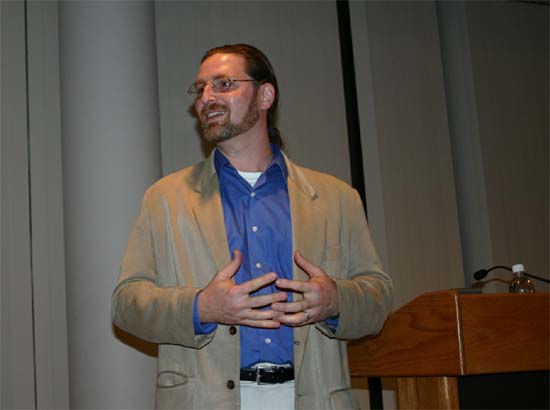 RPCV Joby Taylor, head of the Shriver Center at UMBC, welcomes guests to the campus. 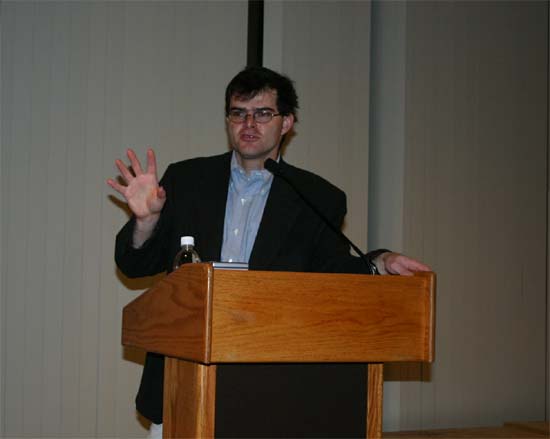 Scott Stossel spoke to the crowd about Sargent Shriver and the birth of the Peace Corps. 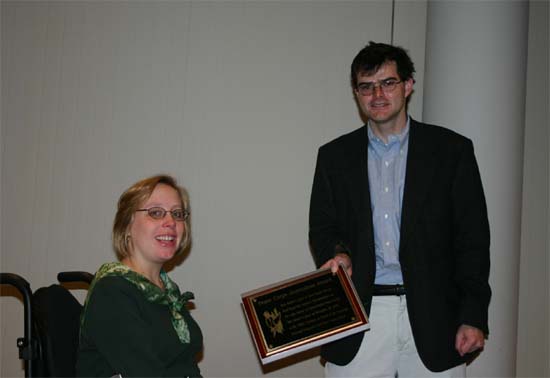 Paraguay RPCV Christa Bucks-Camacho presents Scott with an award for his contribution to documenting the history of the Peace Corps. The award is an annual award sponsored by Peace Corps Online and the Maryland Returned Volunteers. 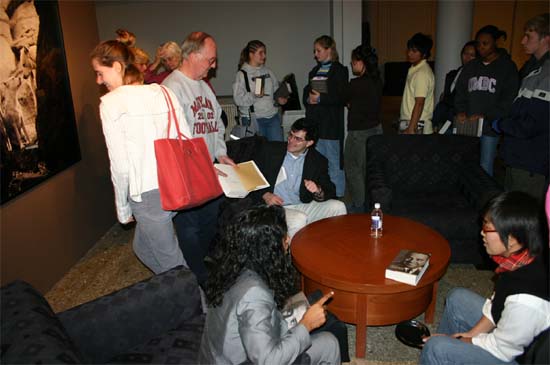 Scott signed over 100 copies of his book "Sarge" for members of the audience. 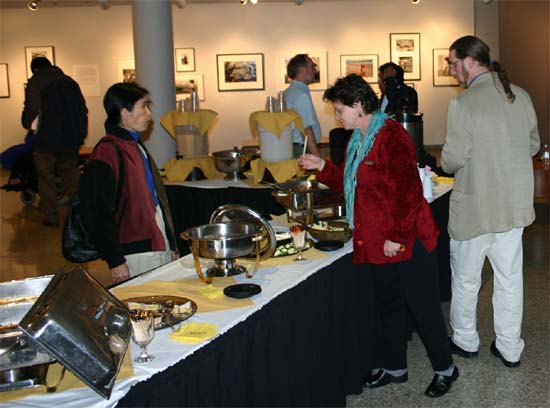 The University of Maryland contributed refreshments for the event. The event was held at UMBC’s Albin O Kuhn Library in the Gallery. 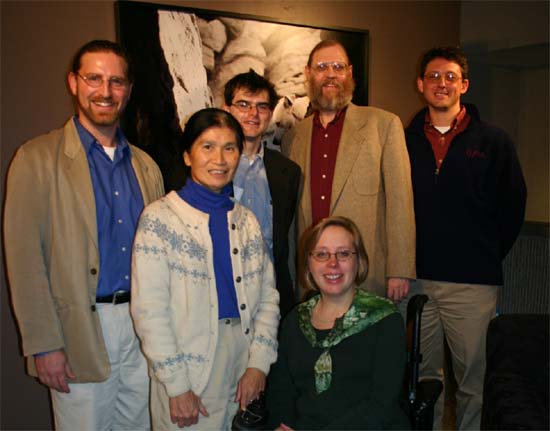 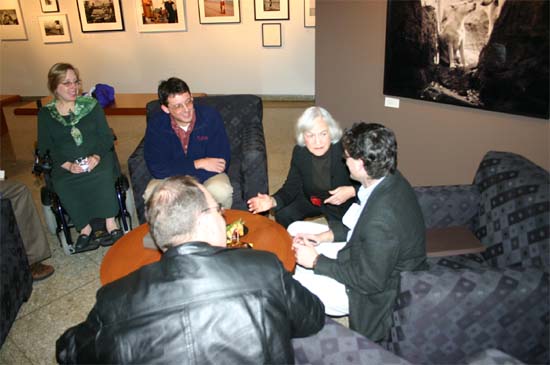 Scott stayed after the event to discuss Peace Corps history and issues with RPCVs. As part of the event, Scott also led a graduate seminar in the afternoon and appeared on the Mark Steiner radio show earlier in the day to promote the event.


When this story was posted in November 2004, this was on the front page of PCOL:

This story has been posted in the following forums: : Headlines; Peace Corps Directors - Shriver; History

I would like to add the fact that in the late 50's Hubert H. Humphrey and Henry Reuss proposed the idea of the Peace Corps.

Founding Fathers
Two key people in Congress, Henry Reuss and Hubert Humphrey, both proposed the idea of the Peace Corps in the late 1950s.
Reuss voiced it in 1957 when he was a member of the Joint Economic Committee and traveled to Southeast Asia. He, by chance, came upon a UNESCO team of young teachers from America and other countries who were working at the village level. For three years after that, Congressman Reuss talked to student conferences about establishing a “Point Four Youth Corps” and wrote articles about it in magazines. In January of 1960, Reuss introduced in the House of Representatives the first Peace Corps-type legislation. It sought a study of “the advisability and practicability to the establishment of a Point Four Youth Corps.”
In the Senate, Hubert Humphrey of Minnesota was a member of the influential Senate Foreign Relations Committee. In the late 1950s, he, too, suggested the enlistment of talented young men and women in an overseas operation for education, health care, vocational training, and community development. The idea was liked in the Senate, but the State Department was against it. Humphrey began to research the possibilities of such a program with his staff and realized there was a groundswell of popular support for the idea which he advocated during his unsuccessful campaign for the Democratic presidential nomination in the spring of 1960.
In June of 1960, Humphrey introduced in the Senate a bill to send “young men to assist the peoples of the underdeveloped areas of the world to combat poverty, disease, illiteracy and hunger.”
What’s important here is this bill — Senate S. 3675 — was the first to use the specific name “Peace Corps.”
Now it was too late in the session for his proposal to have any hope of passing into legislation, but he wanted the bill to be printed and appropriately referred so as to focus the Congress and the public on the Peace Corps idea at a critical moment — just before the presidential election of 1960.
Meanwhile, Reuss’s bill was added as a rider to the Mutual Security Act which authorized $10,000 for a study of a Point Four Youth Corps.
Also in 1960, several other people were expressing support: General James Gavin; Chester Bowles, former governor of Connecticut and ambassador to India; William Douglas, associate justice of the Supreme Count; James Reston of the New York Times; Milton Shapp, from Philadelphia; Walt Rostow of MIT; and Senator Jacob Javits of New York, who urged Republican presidential candidate Richard Nixon to adopt the idea. Nixon refused.

When I was canvassing for ACT in Toledo, OH in September I knocked on the door of a man with the last name of Bahow. He was very enthusiastic for Kerry and we talked a while. I happened to mention that I had been in the Peace Corps (Turkey IV, 1964-66). He said that a relative of his, a great uncle or something from Massachusetts, is the person who first had the idea for the Peace Corps, maybe as far back as the 1940's.
The name I wrote down on my piece of paper is Eric Bahow, although I'm not sure whether that is the first name of the great uncle or the man I talked with.
Can anybody track this down? I tried Google and didn't find anything. Does Scott Stossel or anyone know anything about this man? Just curious.