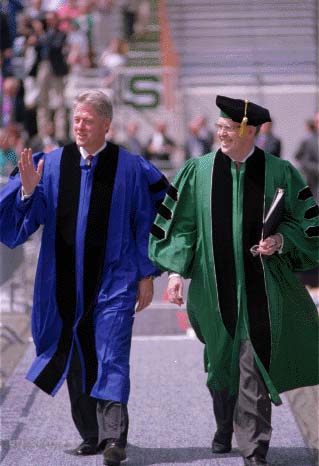 WASHINGTON (AllPolitics, Jan. 3) -- President Bill Clinton says he'll ask Congress to approve a $48 million funding increase for the Peace Corps, an agency he described as "one of the finest examples of citizen service."

Clinton, who is on vacation in the U.S. Virgin Islands, outlined his plan for the 37-year-old volunteer agency Saturday during his weekly radio address.

He called for bipartisan support for putting 10,000 Peace Corps workers overseas by the year 2000.

"In a world where we're more and more affected by what happens beyond our borders, we have to work harder to overcome the divisions that undermine the integrity and quality of life around the world, as well as here at home," Clinton said.

"Strengthening the Peace Corps ... is both an opportunity and an obligation we should seize in 1998."

Clinton's proposed funding increase would represent a 50 percent hike in the Peace Corps' budget, the largest in the agency's history.

President John F. Kennedy founded the Peace Corps in 1961. Today, its volunteers work in newly democratized countries to educate residents about entrepreneurship and the free-market system, among other assignments, Clinton said.

The president's speech came near the end of his family's six-day vacation stay at two resort towns this week. The Clintons began their vacation Tuesday on Hilton Head Island in South Carolina, then traveled to St. Thomas Thursday.

Clinton played a round of golf Saturday on St. Thomas, an island between the Atlantic and the Caribbean where he, wife Hillary, daughter Chelsea and dog Buddy are staying. They are scheduled to wrap up their trip Sunday.

The United States condemned the attack and urged an investigation, Lockhart added.

This story has been posted in the following forums: : Headlines; Expansion; Appropriations