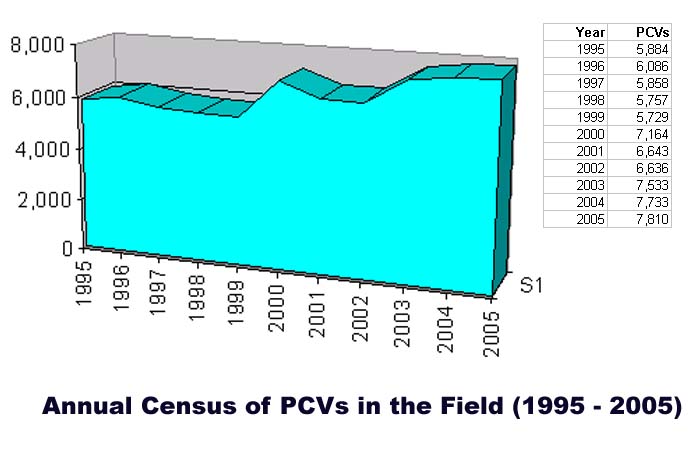 Congratulations to the Peace Corps for the highest number of volunteers in 30 years. The official count for fiscal year 2005 includes 7,810 volunteers serving in 71 posts across the globe. Of course, the promise of doubling the Peace Corps to 15,000 made in President Bush's State of the Union Address in 2002 is now a long forgotten dream. With deficits in federal spending stretching far off into the future, any substantive increase in the number of volunteers will have to wait for new approaches in funding and a new administration.

WASHINGTON, D.C., October 19, 2005 – As the Peace Corps nears its 45th anniversary, Director Gaddi H. Vasquez announced today that the agency has reached a 30-year high in the number of volunteers in the field.

"It is with great pleasure that I announce our record numbers today. As Americans, we can be very proud of our commitment to helping others when and where they have the greatest need. The number of volunteers in the field today is a reflection of that great American spirit of giving and volunteerism," said Director Vasquez.

In addition, 131 Crisis Corps volunteers are working domestically on Hurricane Katrina relief efforts in the Gulf States through an agreement with the Federal Emergency Management Agency (FEMA). The deployment of volunteers within the United States is a historic first for the Peace Corps.

The Peace Corps has also seen an increase in minority recruitment, where numbers have reached their highest level since the Peace Corps began tracking ethnicity in 1987. In fiscal year 2005, 1,235 volunteers from minority groups joined the Peace Corps, and they now comprise almost 16 percent of all volunteers. This is up from 1,160 volunteers last year. In an effort to encourage minorities to apply to the Peace Corps, new public service announcements were recently created featuring the voice of Forest Whitaker, and an outdoor media campaign was launched in major cities across the country.