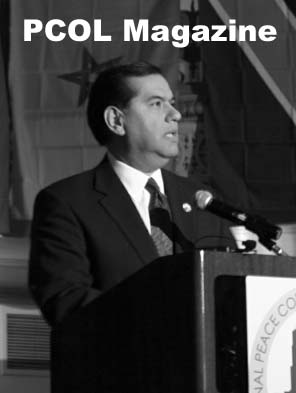 As Gaddi H. Vasquez packs his bags to take on a new assignment as U.S. ambassador to the United Nations Food and Agriculture Organization, he leaves behind a mixed record after four years as Director of the Peace Corps. Mr. Vasquez succeeded in negotiating an agreement with Mexico to accept volunteers, where predecessors failed. The agency improved security for volunteers during Mr. Vasquez's tenure, made a substantial upgrade of its information technology, started an executive training program and broadened volunteer programs to include technology, business and the environment. Although the number of volunteers has risen during Mr. Bush's term to a 30-year high of almost 8,000, it remains far short of meeting Bush's 2002 goal of 15,000 by 2007. Mr. Vasquez said congressional appropriations, although higher, have not gone up enough to support more volunteers. Critics say Mr. Vasquez and the president have not fought hard enough for higher Peace Corps appropriations at a time when their party controls Congress and when the agency can play a vital role in combating the nation's declining image abroad.

By Kenneth B. Dalecki

SPECIAL TO THE WASHINGTON TIMES

As Gaddi H. Vasquez packs his bags to take on a new assignment for President Bush, he leaves behind a mixed record after four years as director of the Peace Corps.

Mr. Vasquez, the 16th Peace Corps director and the first Hispanic to hold that position, will be sworn in Sept. 7 as U.S. ambassador to the United Nations Food and Agriculture Organization in Rome. Mr. Bush has nominated Ronald Tschetter, a Montana financial services executive and a 1960s Peace Corps volunteer, to succeed Mr. Vasquez.

Early in his administration, Mr. Vasquez convened a diversity task force to determine how to boost Peace Corps recruitment among minorities. The result has been information kits and public service announcements in Spanish, cooperative agreements with minority organizations and minority recruitment efforts. Still, the number of minority volunteers remains less than half their percentage in the U.S. population.

Today, minorities make up slightly less than 16 percent of the 8,000 volunteers, an increase of 1 percent since 2002 and a gain of less than 2 percent since 1996. The percentage of blacks and Hispanics has remained stable at 3 percent each, and the number of Asian-Americans has ranged from 4 percent to 5 percent. Last year, minority groups accounted for 33 percent of the nation's population, according to the U.S. Census Bureau.

Economics is the most significant reason for the relatively low number of minority volunteers, Mr. Vasquez said during an interview at Peace Corps headquarters. He cited himself as an example. After his parents struggled to help him become the first in his family to graduate from college, Mr. Vasquez said his first priority was to "go out and get a job." He became a policeman in Orange County, Calif., where he rose to become county executive before resigning in 1994 when risky investments by the treasurer put the county in bankruptcy.

Mr. Vasquez frequently speaks to minority audiences and stresses the value of having the Peace Corps on one's resume when seeking employment at the State Department and government and private development agencies.

Besides a living allowance paid to volunteers while they are in the field, the Peace Corps gives them $6,000 on completion of their two-year service. Volunteers can earn credits toward graduate degrees at participating universities, their federal student loans can be deferred, and up to 30 percent of their Perkins loans may be forgiven after two years of service. The agency also offers job-placement services.

Another hindrance to minority recruitment is education. All but 4 percent of volunteers have a college degree. Mr. Vasquez said the agency has begun recruiting at community colleges because they have more student diversity, including older volunteers who return to school for special training. An associate degree and relevant work experience can qualify an applicant for admission to the Peace Corps. The agency can afford to be picky: It has room for only a third of applicants.

His Mexican-American heritage helped Mr. Vasquez succeed in negotiating an agreement with Mexico to accept volunteers, where predecessors failed. His grandparents were from Mexico, and he is fluent in Spanish. The agreement, which involves a small contingent of volunteers who are science and technology specialists, is being expanded to include volunteers working on environmental issues, Mr. Vasquez said.

Volunteers will be arriving in Cambodia early next year, and a U.S. survey team is working with Vietnam to see whether that country's request for a program is viable. Despite surveys that show a declining popularity of the United States abroad, requests for volunteers exceed what the Peace Corps can fill.

Critics say Mr. Vasquez and the president have not fought hard enough for higher Peace Corps appropriations at a time when their party controls Congress and when the agency can play a vital role in combating the nation's declining image abroad.

Mr. Vasquez can cite improvements in security for volunteers during his tenure, substantial upgrade of its information technology, the start of an executive training program and the broadening of volunteer programs to include technology, business and the environment.

The Senate may take up Mr. Tschetter's nomination in September or October. His status as a former volunteer is likely to ease his confirmation. Mr. Vasquez was opposed by a hastily assembled group of Peace Corps veterans who wanted a former volunteer as director; only two previous directors had served in the Peace Corps.

Several early critics have come around. "Some have said, 'I wasn't for you, but now I'm sad to see you leave,'" Mr. Vasquez said.

John Coyne, a member of the Committee for the Future of the Peace Corps, which opposed Mr. Vasquez during his confirmation hearing and remains critical of the agency's funding, said Mr. Vasquez "represented the country well."

The Peace Corps is in its 45th year and has sent a total of 182,000 volunteers to about 140 countries. Mr. Vasquez has traveled to 61 countries as director and expressed admiration for volunteers serving in Third World conditions.

In remote villages, "the Peace Corps volunteer may be the only American those people ever meet," Mr. Vasquez said. "I meet prime ministers, presidents, leaders of government who have shared with me how, when growing up in their villages, they were taught by Peace Corps volunteers, and they have never forgotten that experience.

"I don't know that President Kennedy could have ever imagined the enormous success of this idea, and that 45 years later, Americans are not only interested but enthused about going overseas to doing international service."

Mr. Vasquez said he has no plans beyond his U.N. assignment, although he intends to return to Orange County, where he has kept a home, with his wife and son.