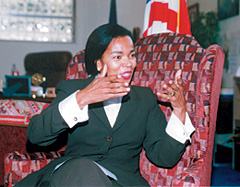 In western Saudi Arabia, where there are few women in the workplace and men lead the corporations and drive the cars, an influential African-American woman coordinates U.S. diplomacy among the powerful men.

This is the challenge for Cleveland Heights native Gina Abercrombie-Winstanley, who spoke to the City Club on Friday. She is the U.S. consul general in Jeddah, Saudi Arabia - the first woman to hold the position.

Abercrombie-Winstanley, who grew up on Forest Street near Lee Road, recalls spending much of her youth on Coventry Road, frequenting Passport to Peru and other shops that sparked her interest in the world.

"My ties to Cleveland, and to Cleveland Heights specifically, are very strong," she said in an interview, noting that she still holds an Ohio driver's license.

Always interested in what is new and unfamiliar - the "other," as she describes it - Abercrombie-Winstanley took Hebrew at Cleveland Heights High School. But she also played the flute and trombone, worked during the summer at Cain Park and as an usher for a summer theater group.

But after attending George Washington University, studying for a year at Tel Aviv University and working in the Persian Gulf for the Peace Corps, Abercrombie-Winstanley knew where her focus would be.

In Jeddah, the primary focus is to further the government's diplomatic interests. But the Arabic-speaking Abercrombie-Winstanley has "cast her net wide" in the region, reaching out not only to the country's educated cadre but also to its non-English-speaking citizens, she said.

Being a woman has been an asset. Because the country is so divided and men are often prohibited from entering women-only facilities, she has access to a portion of the population unavailable to her male predecessors.

She has also been an advocate for women, setting up internship programs and working with female colleges - women constitute the majority of college-educated Saudis - to coordinate discussions on women's issues. The Saudi people, she said, have made some strides in the past few years.

"They're on the brink, and they just need to get over the edge," she said. "The women are outstanding, but they need access."

U.S. Ambassador Wat Cluverius, who is president and CEO of the Cleveland Council on World Affairs, said dealing with a woman consul general benefits the Saudis.

"Being a woman was tough . . . and I think she's doing very, very well," Cluverius said.

Abercrombie-Winstanley's husband and two children were advised in April to evacuate because of increased violence in Saudi Arabia and Iraq. The war, she said, has fostered Saudi "ill will" and has made her job "much more challenging." She now must spend her last year in the country without her family.

"In many ways, I have a long, unhappy year ahead of me," she said. "It's loving the job, loving the region, that keeps people going."

To reach this Plain Dealer reporter:

This story has been posted in the following forums: : Headlines; COS - Oman; Arab Issues; Women's Issues; Diplomacy; Saudi Arabia