Gina Abercrombie-Winstanley, a U.S. consul general, has met with Saudi reformers despite efforts by Saudi leaders to block the discussions 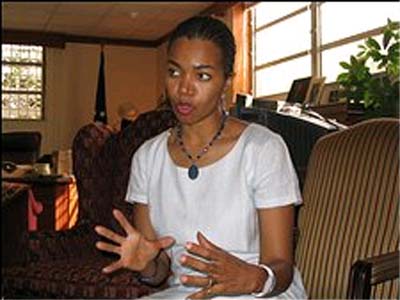 Gina Abercrombie-Winstanley, a U.S. consul general, has met with Saudi reformers despite efforts by Saudi leaders to block the discussions

Caption: Gina Abercrombie-Winstanley, a U.S. consul general, has met with Saudi reformers despite efforts by Saudi leaders to block the discussions. (David B. Ottaway -- The Washington Post)

JIDDAH, Saudi Arabia -- Gina Abercrombie-Winstanley, the U.S. consul general here, waited outside a restaurant for evening prayers to end so she could enter. Suddenly, a Saudi religious policeman barred her way, pointing out that she was not wearing an abaya, the black cloak required of Saudi women in public.

She was a U.S. diplomat, she told him. He spit in his hand and rubbed it on the sole of his shoe. "This is what I think of your diplomatic status," he said, Abercrombie-Winstanley recounted in a recent interview.

Abercrombie-Winstanley, 46, an ebullient career diplomat, was undeterred. She began meeting with Saudi reformers who were impressed by stories of last year's encounter, which gave her a taste of the realities they face.

Last month, it was the Saudi government that tried to block Abercrombie-Winstanley's path, warning the reformers in Jiddah to stop meeting with her and other U.S. diplomats. On March 22, the Saudi interior minister, Prince Nayef, delivered blunt words at a meeting of about a dozen reform leaders, according to two Saudi reformers who were there.

Disparaging the reformers as "agents of America," Nayef said: "The government is not weak and the United States will not protect you," according to one of them, who spoke on condition that he not be identified by name because he feared arrest.

Nayef's warning was one of the latest signs of friction between the two countries. The relationship has grown more tense since the Bush administration began in late 2002 to push for political, social and economic change in Saudi Arabia.

In a statement last month, Nayef confirmed that about a dozen reformers had been arrested on the eve of Secretary of State Colin L. Powell's visit on March 19 in part because of their contacts with "foreigners," though he did not specifically mention Abercrombie-Winstanley or the United States. The Saudis also justified the arrests by citing the reformers' calls for a constitutional monarchy and an independent human rights commission.

Since the Sept. 11, 2001, terrorist attacks on New York and Washington and the identification of 15 of the 19 hijackers as Saudis, testimony at congressional hearings has portrayed the kingdom as a center of terrorist financing and an extremist strain of Islam.

Tough new visa restrictions have also ended easy access for the thousands of Saudis who enter the United States every year. No new major U.S. military weapons deals have been announced. A plan for U.S. companies to play a major role in developing the country's energy sector has collapsed. The two governments are at odds over oil prices, Israel and the Palestinians, and Iraq, whose instability is a major concern here.

Officially, Saudi and U.S. spokesmen insist that all is well with the relationship. Both sides point to their increasingly close cooperation in the struggle against Islamic terrorists -- the CIA and FBI now provide raw intelligence to Saudi security authorities.

"The relationship between Saudi Arabia and the United States is not based on personalities. It's based on interests," said Adel Jubeir, foreign affairs adviser to Crown Prince Abdullah, the kingdom's de facto ruler. "I don't think it's ever been as strong as it is now."

Powell, at a news conference in Riyadh last month after his meeting with the crown prince, also repeatedly described ties as "quite strong."

Yet in a rare discordant note, Powell and his counterpart, Prince Saud Faisal, publicly aired U.S.-Saudi differences over the arrests of the reformers.

"We have concerns when people who are trying to express their views and do it in an open way, and a democratic way, are unable to do so," Powell said.

Saud retorted: "These people sought dissension when the whole country was looking for unity and a clear vision, especially at a time when it is facing a terrorist threat. This is not the time to seek dissension."

A more ominous development was the failure of U.S. firms to win Saudi contracts in early March, the first time in 30 years that foreign companies were allowed back into the kingdom to explore for new gas deposits. Saudi Aramco, the largest state oil company in the world, signed deals with Russian, Chinese and European firms.

The Saudis initially intended to give Exxon Mobil Corp., the U.S. oil giant, the leading role in the deal, viewing the move as part of a larger strategy to revitalize the entire U.S.-Saudi relationship. But nearly five years of negotiations unraveled in June for reasons still being hotly debated -- the post-Sept. 11 chill, U.S. policy in the Middle East and squabbles over profit margins.

"I think this carries political implications as well as commercial implications for the United States," said Robert Ebel, energy program chairman at the Center for Strategic and International Studies, based in Washington.

These implications have become clear as U.S. gasoline prices have increased. Saudi Arabia was blamed for the higher costs, and the topic quickly became an issue in the U.S. presidential campaign.

No issue currently rankles the Saudi royal family more than the Bush administration's talk of promoting political reform. President Bush's latest plan, the Greater Middle East Initiative, is scheduled to be formally unveiled in June at the summit of the Group of Eight leading industrial powers in Sea Island, Ga.

"For 30 years, the U.S. worked to buttress the status quo in Saudi Arabia," Saleh Mani, a political scientist at King Saud University in Riyadh, said at a conference at the Center for Contemporary Arab Studies at Georgetown University in late January. "Now it wants regime change. It's not the status quo policy it used to be."

During a visit to neighboring Yemen in late March, Prince Saud, the foreign minister, said that U.S. "ideas and proposals" amounted to "flagrant accusations against the Arab countries and people."

"These initiatives look good from outside, but they are malicious in essence . . . as if we are waiting to receive direction from abroad to look into issues concerning our citizens."

U.S. administrations have for decades worried that the Saudi royal family would not institute reforms fast enough to stay in power and fend off Islamic extremists and Arab radicals. The former U.S. ambassador to the kingdom, Robert Jordan, who left Riyadh last fall, expressed the concern that has haunted every U.S. administration since the 1960s. "They are making progress," he said in a telephone interview last month. "The question is: What is the pace going to be?"

Last October, the Saudi government announced plans to elect half of the seats on municipal councils. Since then, it has allowed the creation of a human rights commission and an association of journalists. And it is making changes in its religiously oriented school curriculum.

But it has not announced a date for the voting, and it has rebuffed reformers' demands to elect one-third of the 120-member consultative Shura Council. The Saudi defense minister, Prince Sultan, recently said that the royal family wanted to "select people who are efficient, educated and cultured" for the council, and not "people without proper qualifications."

Nayef made similar comments to the reformers last month. "The country is not ready for elections because the people will either elect tribal leaders or those who can neither read nor write," according to the account of one participant.

The restaurant encounter involving Abercrombie-Winstanley never appeared in the government-controlled press but quickly became the talk of Jiddah. She might never have met Mohamed Saeed Tayeb were it not for the religious keepers of Saudi public morality, known as mutaween.

Tayeb, an Arab nationalist, has been agitating for political reforms for years, which has frequently landed him in jail.

Despite his well-known anti-Americanism, Tayeb was so appalled when he heard about the consul general's misadventure at the restaurant in Riyadh in February 2003 that he apologized to her for the mutawa's behavior.

In December, Tayeb invited Abercrombie-Winstanley to his regular Tuesday night political salon, where as many as 70 Saudi intellectuals, academics, writers and businessmen of a reformist bent gathered to quiz her.

"There are lots of questions from Saudis" about U.S. support for reform, Abercrombie-Winstanley said. "Can we be trusted? What is it we want to do? I always with great sincerity say: 'It isn't for us to say what we want to do. . . . While we intend to be as supportive as possible, we can't just tell you how to do it. It's got to be appropriate for Saudi Arabia.' "

The king's son, Abdelaziz bin Fahd, showed up half an hour after she had left to defend the kingdom's record on reform. Abercrombie-Winstanley later heard that he said it was "inappropriate" for an American diplomat to attend Tayeb's political meetings.

On March 16, three days before Powell's visit, Tayeb was arrested and held for two weeks.

This story has been posted in the following forums: : Headlines; COS - Oman; Diplomacy; Saudi Arabia