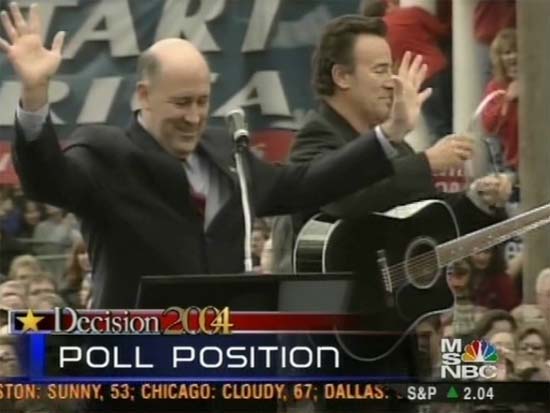 "Born in the USA" will never ring truer than on West Washington Avenue Thursday when The Boss comes to town to join U.S. Sen. John Kerry and back his bid for the White House.

Rock icon Bruce Springsteen will warm up a crowd organizers say could top 60,000 people in what is being billed as one of the biggest political rallies Wisconsin will have seen.

The stage is set to be located at Bassett Street and West Wash, with the crowd stretching up the hill to the Capitol, Janet Piraino, chief of staff for Mayor Dave Cieslewicz, said today.

Tickets will be needed to attend the rally and they are available for free at five locations in Madison and Middleton and on the Internet.

Tickets to the rally are also available through the Internet at www.johnkerry.com/madison.

Gates to the Kerry rally will open at 10 a.m., with music tentatively starting at 11 a.m. Kerry is expected to speak beginning at noon.

The "world's largest phone bank" is one of the events, Dane County Executive Kathleen Falk said today, with everyone attending the rally asked to bring their cell phones so they can call at least five people from the rally to encourage people to vote Nov. 2.

The city's Street Use Team gave conditional approval Monday to the Kerry campaign to switch the location of the rally Thursday from the Capitol to West Washington Avenue, because of the huge crowd anticipated for the rally.

"We didn't feel the Martin Luther King Boulevard venue was sufficient to hold the numbers expected," Piraino said. "We expect to fill West Wash from the Capitol down to the stage."

Other events are planned at the rally to warm up the crowd, and speeches are already in the works from the heavy Democratic hitters in Wisconsin, including Doyle, U.S. Sen. Russ Feingold and Madison's Congresswoman Tammy Baldwin.

Caroline Kennedy Schlossberg, daughter of the late President John F. Kennedy, was at the AFSCME headquarters in Middleton today making campaign signs for the Kerry rally.

She said she wouldn't be able to be at the rally but would love to be on West Washington to listen to the music and the Kerry message.

"This is great," Doyle said. "I'm a big fan. This is going to be huge to have Bruce Springsteen there for our generation, and the Foo Fighters to attract college students. It's going to be great."

Doyle pointed out that Democratic presidential candidates dating back to Walter Mondale in 1984, Bill Clinton in 1992 and 1996 and Al Gore in 2000 have made an October Capitol rally part of their campaign schedule.

"This has really become a national tradition to have candidates come through for a Madison rally this close to the election," Doyle said. "This is going to be one of the great national rallies."

Kerry was joined by Clinton Monday in Philadelphia at a rally that drew an estimated 120,000.

Since Green's ads say Doyle gives illegal immigrants "handouts"...What would he do if he saw a pregnant woman lying in the road after being hit by a car, while running across the border from Mexico in to the U.S.,with a three year old child who was holding on to her hand?
Green would not give her a handout. He would just let her alone, it will pass...OR:
**Would he get help? / if so / who should pay the help?
**Would he help the little 3 year old with food, clothing,and shelter?/ If so / Who should do it, and who will pay?
**Since immigration is a federal policy, and not being enforced,( We could close the border with a simple phone call to our military) Why isn't he doing anything about the lawbreakers who are in charge of enforcing the law,(President is head of the executive branch and must carry out the laws of the United States, BY OATH), or punishing those aiding the lawbreakers, and arresting those who encourage more to come here illegally?

** Should a person rent to a lawbreaker,and an illegal immigrant? Is it OK to help people who broke our laws, hire them, make others pay their bills...