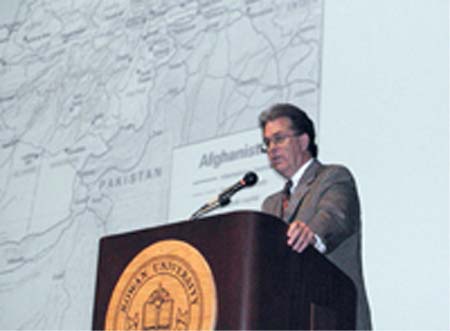 MIAMI, Oct. 29 /PRNewswire/ -- An award-winning independent filmmaker will try to influence voters in the battleground state of Florida by releasing Rush to War: Between Iraq and a Hard Place (http://www.rushtowar.com) between now and the election. Veteran writer / director Robert Taicher's documentary film presents a scathing indictment of the Bush administration's handling of the "War on Terror." Taicher will personally assist in the distribution of 40,000 free copies of his film on DVD to Broward, Miami, and Palm Beach counties.

"I strongly believe that this film could have a major impact on the outcome of the presidential election," said Taicher, 59, a long-time Miami Beach resident. "We are targeting the undecided voters, who will likely have the final say in which candidate ends up in the White House."

Early in October 2001, three weeks after the attacks on the World Trade Center and the Pentagon, Taicher and a film crew drove from Los Angeles to Washington, DC and New York, interviewing a cross-section of Americans in the aftermath of the events. Most were astonished as to why anyone would ever want to attack the United States.

"Those involved in the making of this film dedicated long hours and are determined to educate the public as this highly emotional presidential campaign winds down," said Taicher. "And we certainly expect this film will be watched and talked about well after the election."

Rush to War explores the background of events leading up to 9/11. Among the issues considered are: the Cold War and CIA interventions around the globe from the 1950s through the 1970s, America's involvement with the Afghan resistance against the Soviet Union in the 1980s, and an extensive history of the United States' two wars with Iraq.

What emerges is a disturbing indictment of the Bush administration's eagerness to invade Iraq at any cost, with particular emphasis placed on the administration's policies and actions on the "War on Terror" and its consequences for global security in the 21st Century.

Riveting, balanced, informative, and ultimately terrifying, Rush to War: Between Iraq and a Hard Place presents compelling insight into the neo-con agenda just as Americans get ready to head to the polls next on November 2. This is a must-see for anyone concerned about what a second Bush victory will mean for the country.

Special election week screenings of Rush to War: Between Iraq and a Hard Place will take place throughout the state of Florida through Election Day, November 2.

Taicher directed "Inside Out" (1986) with Elliott Gould and Jennifer Tilly and produced the films "The Holy Mountain" and "The Rainbow Thief" by maverick filmmaker Alejandro Jodorowsky.

To view the trailer, purchase a DVD copy or get information regarding the distribution plans between now and the election of Rush to War: Between Iraq and a Hard Place, go to http://www.rushtowar.com.

For more information or to schedule an interview with director Robert
Taicher contact Bloom Public Relations, Dave Bloom, (562) 866-3392, or
dave@ournewsroom.com.

This story has been posted in the following forums: : Headlines; COS - Afghanistan; Documentaries; Movies; Speaking Out; Iraq