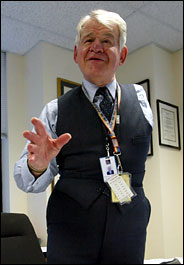 Caption: The best we can hope for is to make the few small changes that are possible," says William Josephson Photo: Joyce Dopkeen/The New York Times

WILLIAM JOSEPHSON officially retired from his position as New York's top charity watchdog - some would say pit bull - last summer, but his phones are still ringing off the hook. "How is it that I can go to lunch for an hour and come back and have nine voice mails waiting for me?" he says grumpily. "Doesn't anyone eat anymore?"

His expertise on the arcane law and history of the Electoral College, coupled with his refusal to maintain an e-mail address or carry a cellphone, has fueled a telephone onslaught. Mr. Josephson, 70, had hoped to be working on long-delayed writing projects and playing the baritone horn, which he does with one arm, having lost the other to bone cancer as a teenager.

The calls have come from legal scholars hired by the campaigns and the parties that are preparing for a potential post-election battle and are seeking his counsel.

Mr. Josephson's work at the New York attorney general's office, overseeing the state's vast and high-profile nonprofit sector, was supposed to have been his last job in his public life, which began when he helped found the Peace Corps.

That pulled him into the constellation of bright, dedicated young men surrounding Sargent Shriver, the first director of the Peace Corps. "Sarge has a remarkable knack for creating institutions that survive and somehow work," Mr. Josephson says. "He made it easy to believe in the potential of public service."

As a corporate lawyer at Mr. Shriver's Manhattan law firm, Fried, Frank, Harris, Shriver & Jacobson, Mr. Josephson stepped into the public arena for a variety of tasks. Victor Gotbaum, the leader of the city's largest municipal union, hired him to represent workers during New York's financial crisis in the 1970's, and for roughly four decades he helped the City University of New York issue billions of dollars in bonds to renovate its campuses.

In 1994, tired of straddling public and private careers, he was looking for a purely public service job to cap his career. "I wanted to be head of the National Archives, which is one of these fabulous, neglected institutions," he says. He made it as far as an interview at the White House. But as the process dragged on, he eventually withdrew from contention, even though, Mr. Josephson says, "it was my dream job.''

He knew nothing about Eliot Spitzer, the New York State attorney general, when Michele Hirshman, an old and respected legal adversary who is first deputy for Mr. Spitzer, called him a few years later and asked whether he would be interested in leading the charities bureau.

He was, and thus Mr. Josephson presided over New York's charities at a time when scrutiny of the nonprofit sector by donors and federal and state regulators increased dramatically. His first task was to protect the charitable assets of Empire Blue Cross and Blue Shield when it converted from a nonprofit insurer to a profit-making business, matching wits with his friend Ira Millstein, a lawyer who represented Empire.

His biggest challenge came after Sept. 11, 2001, when he and Mr. Spitzer forced the charities clamoring for some of the billions of dollars donated to help victims' families to collaborate. One writing project he is eager to start is the story of the attack from the point of view of state and local law enforcement officials. "It really hasn't been told that way, and it's a great story," says Mr. Josephson, who watched from Mr. Spitzer's office as the twin towers fell.

THESE days, a priority for Mr. Josephson is finishing a series of articles on Electoral College law. He started them in 1980 when the Democratic National Committee hired him to look at the issues posed by the presence of a third-party presidential candidate, John B. Anderson, which raised the possibility of disputed race.

In the end, Mr. Anderson won no electoral votes, but Mr. Josephson saw a law review article in his work and joined with Beverly J. Ross, then an associate at Fried, Frank, to write it. They were still working on it in 1988 - "I'm a very slow writer," Mr. Josephson says - when he was summoned by the allies of Michael S. Dukakis, the Democratic presidential contender, who were seeking advice on the electoral college. When Ross Perot ran as an independent in 1992, he also sought the advice of Mr. Josephson, who said he had to decline because of other commitments.

Mr. Josephson and Ms. Ross finally wrote two articles that were used by Laurence H. Tribe, the Harvard law professor, to prepare his case before the Supreme Court on behalf of Al Gore after the 2000 election. They were cited by Justice John Paul Stevens in his dissent against the majority decision to stop the recount in Florida.

Another close contest expected today may keep stoking the controversy over the Electoral College, but Mr. Stephenson says he doesn't expect the system to be abolished or overhauled.

"We're stuck with it because it's advantageous for both big and small states, so neither would vote for a constitutional amendment to get rid of it,'' he said. "The best we can hope for is to make the few small changes that are possible.''

He had hoped to have a third article finished by now, but he took a detour to help Senator John Kerry's campaign in a hotly contested Wisconsin district, where Mr. Josephson and his wife, Barbara Haws, the archivist for the New York Philharmonic, have registered voters and will transport them to the polls.

"I'm on the 17th draft," says Mr. Josephson, who lives in Brooklyn Heights and still has an office at Fried, Frank.

"But if my phone is any indication, this isn't a topic that's going away anytime soon."

This story has been posted in the following forums: : Headlines; Staff; Law; Public Service; NGO's