During her two years in Moldova, where she served with the Peace Corps, Sarah Dobsevage was struck by how resourceful the people there were 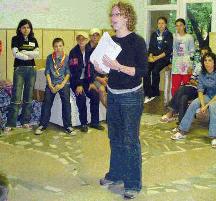 During her two years in Moldova, where she served with the Peace Corps, Sarah Dobsevage was struck by how resourceful the people there were

Sarah Dobsevage teaches English to students in Moldova as a volunteer for the Peace Corps.

During her two years in Moldova, where she served with the Peace Corps, Bethel native Sarah Dobsevage was struck by how resourceful the people there were.

Because the country is the poorest in Europe - the average income is $30 a month - people are innovative, she said.

"They learn to create for themselves and they manage with what they have. I felt unequipped in that culture," Dobsevage said. "Most people build their own homes. They’re subsistence farmers, so everyone has chickens, goats and gardens. They grow their own vegetables and are very efficient in everything they do."

But at the same time, the people are "naïve in terms of worldly matters," she said. This is mainly because many of them cannot travel, not even outside their villages, because "they can’t afford to."

Dobsevage, on the other hand, has done plenty of traveling. In high school, she was twice an exchange student in Russian-speaking countries, the first time over the summer before her freshman year when she was just 14.

Now 25 and a graduate student in the School of International and Public Affairs at Columbia University, Dobsevage followed in the footsteps of her mother, Ruth, when she joined the Peace Corps. Her mother served in Senegal, West Africa, in the late 1960s.

The two of them are among the more than 172,000 Americans who have served in over 137 countries since President John F. Kennedy signed the executive order creating the Peace Corps on March 1, 1960. Today, the Peace Corps has over 7,500 volunteers serving in 71 nations who work on developing self-sustaining projects in education, business, health, environment and agriculture.

Dobsevage, who studied Russian in college, chose Moldova, part of the former Soviet Union, to improve her Russian. "I knew I couldn’t learn Russian without being immersed in the culture," she said by phone from Manhattan, where she now lives.

She taught English to students from second grade up. The students speak Russian and Romanian, the country’s national language, but are required to learn two additional foreign languages and one of them is often English.

Dobsevage lived in Vulcanesti, a community in the southernmost part of the country, a mostly Russian-speaking region. It is a medium-sized town of 18,000 people, and she lived with a host family there. Besides teaching, she ran ecological seminars, wrote grants, helped with translation and worked at three summer camps.

Because the country has a favorable climate, "very comparable to here," and good farmland, the economy depends heavily on agriculture. Most of the families she met have at least one person living abroad to earn a living. In fact, as many as a million Moldovans are out of the country seeking work

Dobsevage was quickly engaged by the culture and the people she met.

"I adore the children," she said. "The children are very respectful and the people have closer family bonds, closer friendships. There is a different emphasis on what is valued. They are not always worried about making money because there just isn’t that money to be earned. And because often parents are working abroad to make a living, children are often brought up by their grandparents."

The experience has helped shape her own vision of the world. "It changed the way I look at the world and made me appreciate everything I have," she said. "There, they live without running water. They live without heat. The electricity can be turned off unexpectedly and there are things they’re just accustomed to, things they don’t have that we have and take for granted."

In addition to honing her Russian, Dobsevage was looking for a "challenge" when she left two summers ago. "I was bored. I wanted to help out and learn about different countries, see what it’s like to live in a so-called developing country," she said.

Before entering the Peace Corps, Dobsevage worked as an intern in the Ukrainian Section of Peace the Foreign Service Institute with the Department of the State. Future plans involve "definitely" living abroad again. She wants to do an internship in another Russian speaking country, or perhaps one in the Middle East.

"I am now studying Arabic and am interested in the language side of things," she said.