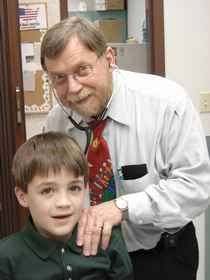 Local Pediatrician With A Fascinating Past
by Laurie Crater Battles
posted October 14, 2004

Click to Enlarge
Photo by Laurie Battles
Dr. Tom Voychehovski with patient he has seen for all of his seven years - Matthew Battles. Click to enlarge.
While yet in the womb, beloved local pediatrician Dr. Tom Voychehovski was helping others in a dramatic, movie-worthy set of circumstances. His mother, a physician in his hometown of Lublin, Poland, regularly crossed into a nearby World War II concentration camp offering medical aid as an emissary of the Red Cross and secreting information to the hidden resistance there. As the war continued to ravage lives, Dr. Voychehovski’s mother, whom he describes as a “hero,” continually made these missions of mercy into the camp where two million people were eventually killed, with Dr. Voychehovski in utero. This dramatic beginning of his life was authentic foreshadowing of a humanitarian bent which has colored the entire landscape of Dr. Voychehovski’s career.

Though communist Poland offered limited opportunities for financial prosperity in the formative years of Dr. Voychehovski’s life, the city of Lublin, with a population of 250,000, was an education mecca of sorts. “Everybody was poor in communist Poland. The only distinction you (could achieve was through) education. Being a professor (was) the highest achievement you could think of,” Dr. Voychehovski remembers. As a result, the hard-working, focused student honed in on the dream of becoming a research scientist. He eventually attended the Medical School of Lublin, part of a trio of interconnected higher education institutions including a theological university where the current Pope of the Roman Catholic Church was once a professor.

Dr. Voychehovski married his high school sweetheart and soon welcomed his first daughter, Dominika, into the colorful intellectual life of his hometown. He studied the immunology of children with frequent infection in association with the pediatric institute of the Lublin medical school at this time. “The conditions were very primitive and money was very scarce. The level of research was, as I see it now, not high, but our spirits, reading and discussions were wonderful,” he recalls of that idealistic opening to a life spent helping children live well.

Changing circumstances at home led to a dramatic, new chapter in Dr. Voychehovski’s life, yet again worthy of film credit. He began to dream of greener research pastures even as his first marriage began to fail. Though today he regrets leaving Dominika in the sole custody of her mother and new stepfather, calling the arrangement a “foolish thing” in hindsight, what would happen next opened a new window of opportunity for the young doctor.

He left the only home he had ever known for the rough and tumble world of academia and medicine in a country where he did not yet speak the language fluently. “I left Lublin in 1976, which was before solidarity and the wave of immigration. People in Lublin were laughing and saying ‘You’ll be back,’” Dr. Voychehovski remembers.

“I worked five months in London, England. I was washing dishes while going to evening classes and trying to learn English. The more English I learned, the better my interviews (to be hired as a doctor) were. (Getting hired) was not easy because I didn’t have any references, trying to cross the iron curtain,” he recalls.

Little did Dr. Voychehovski know that the next dramatic theater of his remarkable life would include wildly beautiful African environs and a second chance at love with an American Peace Corps volunteer. He spent five years in Gambia, a small independent African country which was formerly a British colony as an employee of a British medical research council which was similar to the National Institutes of Health in the U.S.

“This was my second youth,” he says of his work in Africa, where there was no status competition among the ex-patriots serving alongside him. “it didn’t matter if you drove this or that make of car, you played volleyball on the same beach,” he chuckles. The work allowed Dr. Voychehovski to make a definitive mark on the health of the Gambian children, a process which deeply satisfied him. He was second in command at the only pediatric center in the country. “The kids were very sick. Immunization against measles was just starting so there were many cases of it there. A lot of children were dying of tetanus, malnutrition and malaria,” he says.

Saving lives by day, Dr. Voychehovski spent free evenings and days off windsurfing, playing tennis and courting Linda, the Peace Corps volunteer from Oak Ridge, Tennessee who eventually became his bride in a traditional Gambian wedding. “This was a very romantic time for us. There were three hours of travel between the places where we lived. The trip involved crossing a river by ferry and travel by motorcycle. I would visit her and sometimes she would visit me on the weekends and in the meantime we would work on our respective projects,” he recalls.

When the couple came to the U.S. in the early 1980s, Dr. Voychehovski became a resident at a medical center in Delaware affiliated with Jefferson Medical School in Philadelphia. His intense experience in the field treating a wide variety of illnesses in children made his knowledge almost superior in some respects to those of the colleagues who were trying to teach him while at the same time he was unaccustomed to use of some of the advanced technology offered at the U.S. institution. He describes carrying around “a complete mixture of inferiority and superiority” during this time of training.

In Delaware, Dr. Voychehovski says he received life-changing influence under the tutelage of Dr. Katherine Astorly, one of the very first pediatric neonatologists in the United States. He says she practiced medicine “with an incredible humility and dedication.” He says he “spent a lot of time in the intensive care unit learning the new technology which was necessary to help (these babies) with this very humanistic and wonderful physician,” adding that he hopes “some of that rubbed off.”

Once his residency was complete, Dr. Voychehovski obtained a fellowship in pediatric infectious disease research. He began to feel a pull toward practicing pediatrics in lieu of a research career. This feeling was compounded by a physical response which worked against his research. “I was working with guinea pigs and became progressively more and more allergic to them,” he says. He began combating the problem by using gloves, which soon became ineffective. “I ended up wearing a space suit, wheezing and itching all over under the space suit,” he recall, laughing at the memory.

After a stint in Birmingham as a pediatric infectious disease specialist, Dr. Voychehovski and his family, which now included young daughter Sophia, made their home in the Tennessee Valley. He joined a practice which has tentacles all over the Scenic City, focusing his own work out of an office near Hamilton Place Mall called Hamilton Pediatrics.

The Voycheyhovskis make their home on Signal Mountain and plan to remain in the Tennessee Valley indefinitely. Dr.Voychehovski has been blessed with a grandson, Tomy, who was born eight years ago on Dr. Voychehovski’s birthday. He enjoys trips to Poland to ski with Tomy and Tomy’s mother, Voychehovski’s eldest daughter Dominika. Wife Linda is preparing to embark on a new writing career. Youngest daughter Sophia is a student at Georgia Tech studying industrial design.

Dr. Voychehovski’s practice here reflects his love of children, no matter their socio-economic background. “There are a lot of poor people and there are a lot of rich people,” he says of the patients who crowd his waiting rooms daily. In addition to a high percentage of minorities, including immigrants from Mexico and Guatemala, Dr. Voychehovski welcomes a “huge group of immigrants from the Ukraine because I speak Russian and they feel at home.” He says his office offers “a very great and interesting sample of America as a melting pot. It’s exciting.”

This story has been posted in the following forums: : Headlines; COS - The Gambia; COS - Poland; Marriage; Medicine