Adam Gurvitch was in the Peace Corps, teaching English and developing Hungary's first, and ongoing, AIDS education program. Andrea Dezso was completing her graduate degree in art and rearing her son, Mark, from a former marriage. 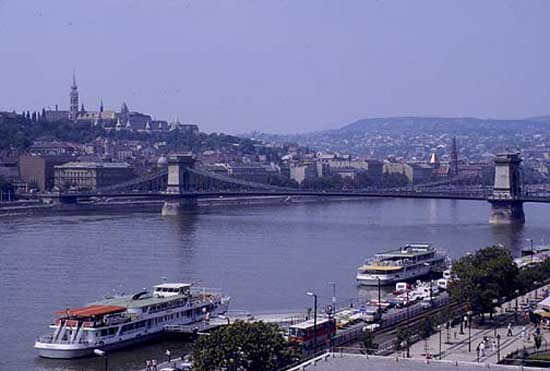 Adam Gurvitch was in the Peace Corps, teaching English and developing Hungary's first, and ongoing, AIDS education program. Andrea Dezso was completing her graduate degree in art and rearing her son, Mark, from a former marriage.

Adam Gurvitch and his Romanian-born wife, Andrea Dezso, gaped at the extreme clutter in an office within 26 Federal Plaza in lower Manhattan, bureaucracy central for immigrants desperately seeking legal status.

They could barely believe it, they said. Applications for green cards littered the tile floor. In the center of the unoccupied room stood a shopping cart overflowing with still more completed forms.

"It looked like a tornado hit it," Gurvitch said.

The couple, who were seeking a work authorization permit for Dezso, an illustrator, froze before the sight, realizing they were not supposed to be viewing it. They had gone looking there for Dezso's application, which she had mailed in weeks before, at the suggestion of a sympathetic clerk.

In those bewildering days in 1997, Gurvitch, now 38, and his wife, 36, knew little about the immigration system except for what he had gleaned, as a boy, from histories of the great European influx through Ellis Island.

What the couple endured in actuality, they said, was a seven-year odyssey fraught with misdirection, disorder and condescension -- or "skeptical disdain," in Gurvitch's words -- within the officious and fluorescent-lighted gateway to modern New York. Dezso landed a green card in February 1998, but gaining her citizenship took until this past August.

"For a middle-class person like myself, who had never intersected with such an inefficient and hostile government service as this one, it was shocking," Gurvitch said.

The journey, not across an ocean in a heaving ship's rat-infested steerage but through a labyrinth strewn with red tape, "lit a fire under me," Gurvitch said. He soon decided to devote his life to helping immigrants with their challenging passage into American society.

He obtained a master's degree in nonprofit management from New School University, completed a fellowship on issues concerning immigrant youth and got a job in September 2000 with the New York Immigration Coalition, which is composed of more than 200 groups that assist newcomers. He is now the director of health advocacy, slicing through bureaucratic encumbrances on behalf of immigrants in need of health care.

"In this city, there are an untold number of situations where immigrants are improperly steered away from medical services to which they are entitled, be it Child Health Plus, Medicaid or hospital treatment," he said. "It's a serious problem, because you have literally millions of uninsured New Yorkers, many of them are foreign-born, like my wife."

Roadblocks to a new life

Gurvitch and Dezso met at a New Year's Eve party in 1995 in an old mansion in Budapest.

He was in the Peace Corps, teaching English and developing Hungary's first, and ongoing, AIDS education program. She was completing her graduate degree in art and rearing her son, Mark, from a former marriage; the boy then was 2 years old. "I hadn't seen so much individualistic expression in Hungary," said Gurvitch, recalling the night he chatted up Dezso, who wore paint on her face and arms illuminated under black light.

Dezso was a bit wary of Gurvitch, she recalled with a smile, but the sensitive American's halting attempts to speak to her in Hungarian impressed her. "I warmed up," she said.

The two soon started dating, and eventually they shared a sprawling apartment with a 30-foot-high ceiling and a view of the Danube within walking distance of Dezso's job. She worked for a philanthropy funded by billionaire George Soros, earning a "Western" wage.

Life was great, she said, but after a visit to New York City in 1996, she was caught up by the vibrancy of the art scene and applied, successfully, for an artist-in-residency fellowship at a graphic-design center in lower Manhattan. In the summer of 1997, she and Gurvitch moved to the city, with Mark joining them after spending a year living with Dezso's ex-husband back in Hungary.

The soon-to-be-married couple had barely settled in with Gurvitch's relatives in Astoria when the fellowship sponsors informed her on her first day that, due to strict immigration rules passed by Congress, it no longer could back her for a green card based on her valid visitor's visa.

Dezso, roiled, launched her own search for a green card, hoping to land one to start as an adjunct professor that fall at Manhattan's School of Visual Arts. But the Immigration and Naturalization Service, as the federal agency then was called, wasn't exactly known for speed or alacrity, and the agency lost her application despite cashing her $360 check, she said.

The couple didn't get a lawyer -- something they say was a big mistake, if a common one. But while they had relative advantages when compared with other applicants -- knowledge of English and the know-how to push against unwarranted resistance, plus one of them was born an American -- they said they endured six daylong waits on the infamously long line outside 26 Federal Plaza, and encountered a surprising amount of indifference and disarray typified by that vacant office with the stuffed shopping cart and green-card applications strewn on the floor.

"It was just awful," Dezso said, detailing a process familiar to millions of new arrivals to the city. "I had never seen such a thing, even in Romania during the dark ages of communism."

"For me," interjected Gurvitch, "it was surprising to see an American system set up, it seemed deliberately, to work as poorly as possible."

Dezso now is a full-time member of the faculty at Parsons School of Design in Manhattan and excited about publication of her illustrated picture book, "Mamushka," in this month's issue of Esopus, a high-end arts magazine. Mark, her son, is now 11 and a citizen, too. The family has an apartment in Astoria.

The application process was taken over by U.S. Citizenship and Immigration Services, now part of the Department of Homeland Security, in early 2003, emphasizing background checks because of heightened concerns about terrorist ties. A spokesman, Chris Bentley, said the president's goals are now on target for 2006.

But Gurvitch said that during the current wait, tax-paying newcomers live with one foot in an underground existence, fearful to go to a hospital or apply for public benefits, and unable to vote for a president or travel.

"I feel for them, I really do," he said. "As an American, I just find it unacceptable, what they are forced to endure for totally unnecessary reasons."

This story has been posted in the following forums: : Headlines; COS - Hungary; Marriage; Immigration; Green Cards