"He represents the best and brightest of his generation," Sam Farr told the congregation 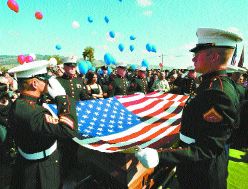 "He represents the best and brightest of his generation," Sam Farr told the congregation

A defender of a nation


Caption: A Marine salutes Friday at a funeral for Victor Gonz·lez Avila at Pajaro Valley Memorial Park in Watsonville. Gonz·lez Avila was the first member of the military from Monterey County to die in the Iraq war. Photo RICHARD GREEN/THE SALINAS CALIFORNIAN


WATSONVILLE -- Long before the funeral Mass for her first born began, Amalia Avila stood by his remains, receiving condolences from hundreds of mourners who came to pay their respects Friday at St. Patrick's Church.

A few feet away lay Lance Cpl. Victor Gonz·lez ¡vila, the first member of the armed forces from Monterey County to die in the Iraq war.

Gonz·lez, who was born in Salinas and lived in Pajaro, was killed in combat at Al Albar province on Oct. 13, barely a month after he'd arrived in the war-torn country. He joined the Marine Corps last year after graduating from high school and spending 3 1/2 years as a police cadet with the Watsonville Police Department.

Gonz·lez's comrades carefully folded the American flag that draped his coffin before the religious ceremony began. A young girl had to be pried away from the Marine's casket, her body shaking uncontrollably with her sobbing.

The Rev. Greg Sandman conducted the ceremony in both Engish and Spanish.

"Although this is a religious ceremony, it is very much a celebration of our country." Sandman said, introducing U.S. Rep. Sam Farr, D-Carmel, who presented the family with a flag that had been flown at half mast in the nation's capitol in Gonz·lez's honor.

"He represents the best and brightest of his generation," Farr told the congregation.

In his homily, Sandman pointed to a glass window that depicts Jesus' final hours.

"Jesus died on the cross to save us, but could Mary understand that?" Sandman asked in Spanish. "To me, she didn't understand, but she accepted it because that was God's will. Sometimes it's difficult to accept God's will, but if we have true faith, we can do it."

Sandman seemed to be addressing Gonz·lez family, his siblings who sat stone-faced, at times sobbing quietly.

In English, Sandman told younger members of the congregation that Gonz·lez had chosen to give his life for a cause greater than himself.

"He was willing to defend our nation and the community as a police officer," he said. "He knew the risk it involved, but in spite of it, he joined the Marines."

There's no greater gift than to lay down your life for somebody else, Sandman said.

After the service, dozens of cars followed the hearse through the streets of Watsonville toward Pajaro Valley Memorial Park, past a wall of students from Lakeview Elementary School and St. Francis High School who stood waving American flags and saluted in honor of Gonz·lez.

At the cemetery, Gonzalez's casket was carried from the hearse to his final resting place by six of his fellow Marines. His parents waited for him, his mother displaying the certificate she received from Farr and the U.S. government.

Hundreds of mourners -- relatives from Mexico, fellow police cadets and Marines, restless children and sorrowful grandmothers -- huddled around the casket after it was placed above the grave. A couple of girls handed out red, white and blue balloons, one or two escaping before it was time to let them go.

Once again, Sandman addressed the crowd in English and Spanish.

"We now commit this body to the grave, for we are dust, and to dust we shall return," he said.

Fallen in the line of duty, Gonz·lez was buried with full military honors. After the 21-gun salute, after Taps was played, and after the balloons were set free, dozens of mourners began to sob loudly.

The family then received the flag that draped their child's coffin and the Purple Heart, the highest military honor bestowed on members of the armed forces or civilians who are injured or killed in the line of duty.

While acquaintances and strangers laid roses on the Marine's casket, a Mariachi group played mournful songs bidding farewell to loved ones, a Mexican tradition brought to this country by Gonz·lez's parents.

"The day I die, I won't take anything with me," goes one of the songs. "We have to enjoy life, as it soon ends."

Elisa Torres, 70, lamented the death of Gonz·lez, who was the same age as her grandson Juan Diego Alvarez, also a Marine.

"Today it was him," she said in Spanish. "Who knows whose child is going to be next?"

Where does a mother find consolation at a time like this?

"In a lot of things," Amalia Avila said after her son had been lowered into the ground. "In knowing that my son is being honored and remembered like he deserved. I'm happy because what people did for him showed me that he was a good boy. I'm amazed at how much my son was loved, but he deserved it."

This story has been posted in the following forums: : Headlines; COS - Colombia; Congress; Obituaries; Iraq