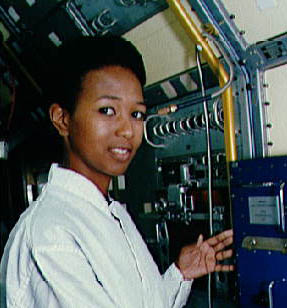 Mae C. Jemison blasted into orbit aboard the Space Shuttle Endeavour, September 12, 1992, the first woman of color to go into space.

Dr. Jemison was Science Mission Specialist (a NASA first) on the STS-47 Spacelab J flight, a US/Japan joint mission. She conducted experiments in life sciences and material sciences, and was co-investigator in the Bone Cell Research experiment in the Spacelab laboratory module. Jemison resigned from NASA in March 1993.

Chemical engineer, scientist, physician, teacher and astronaut, she has a wide range of experience in technology, engineering, and medical research. In addition to her extensive background in science, she is well-versed in African and African-American Studies and is trained in dance and choreography.

Prior to joining the National Aeronautics and Space Administration (NASA) in 1987, she worked as a general practitioner in Los Angeles with the INA/Ross Loos Medical Group. She then spent two and a half years (1983-85) as an Area Peace Corps Medical Officer for Sierra Leone and Liberia in West Africa. Returning to Los Angeles, she resumed her medical practice, working with CIGNA Health Plans of California.

Dr. Jemison, the youngest of three children, was born on October 17, 1955, in Decatur, Alabama and raised in Chicago, Illinois.

She was educated in the Chicago public school system. At sixteen, she entered Stanford University on scholarship where she graduated with a Bachelor of Science degree in Chemical Engineering, and fulfilled the requirements for an A.B. in African and Afro-American Studies. She attended Cornell Medical College where she earned her Doctorate in Medicine in 1981. In medical school, her interest and knowledge in Third World countries evolved into a commitment to effectively contribute. She traveled to Cuba, rural Kenya, and spent a medical clerkship in Thailand at a Cambodian refugee camp. She completed her internship at Los Angeles County/USC Medical Center in 1982.


Dr. Jemison founded The Jemison Group, Inc., located in Houston, Texas, to research, develop and implement advanced technologies suited to the social, political, cultural and economic context of the individual, especially for the developing world. Current projects include: Alpha, (TM) a satellite based telecommunication system to improve health care in West Africa; and The Earth We Share, (TM) an international science camp for students ages 12 to 16, that utilizes an experiential curriculum.

This attitude and her high achievements in historically exclusionary fields led Dartmouth College to invite her to its Hanover campus in 1993 where she taught a course on Space Age Technology and Developing Countries. Dr. Jemison is currently a member of the Dartmouth faculty in the Environmental Studies Program and is Director of The Jemison Institute for Advancing Technology in Developing Countries at Dartmouth College. The Institute was established as an agent for identifying, assessing, researching and implementing advanced technologies that may be employed advantageously to the development of less industrialized nations.

Dr. Jemison is the host and a technical consultant to "World of Wonders" series produced by GRB Entertainment and seen weekly on the Discovery Channel. She is also in demand as a speaker to civic and government organizations, schools and corporations around the country and internationally.

She resides in Houston, Texas with her cats Sneeze and Little Mama.

This story has been posted in the following forums: : Headlines; COS - Sierra Leone; Space; Third Goal; Science; Education; Service