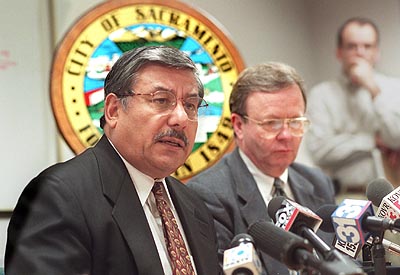 A crowded funeral rich in reminders of his roots: Hard hats and sombreros in throng of cathedral

And an overflow crowd choked off the entrance to Sacramento's huge Cathedral of the Blessed Sacrament as mourners strained to be present to honor the city's popular mayor.

"We've never had an event like this in this town before," said Sacramento County Sheriff Lou Blanas, who led an honor guard that accompanied Serna's flag-draped casket as it was marched through the downtown streets Wednesday morning.

There have been larger funerals for political leaders, but few of them could match the unusual process that saw Serna's evolve from a somber, state-like ceremony into a boisterous union-style rally that celebrated his achievements as a farm worker, labor organizer, teacher and politician.

"He did so much, not just for the schools, but for the whole city," said Bonnie Byrnes, a 48-year-old nurse who took time off from work to attend the services at Cesar Chavez Plaza downtown. "I've been here all my life and he's the only mayor I can ever remember the name of. I kid you not."

It was the kind of impact that led so many to take the time Wednesday to turn out for his funeral, and that made many of the scenes that unfolded there so compelling.

Sacramento Police Chief Arturo Venegas Jr. slowly and reverently pushed Serna's aged mother, Gerania "Hedy" Serna, from City Hall to the plaza in a wheelchair. Later, as Serna's casket was marched through the streets toward the cathedral, she carried a large, framed picture of her son.

People who had never met Serna showed up to honor him, as did mourners who had never voted for him. His political allies and one-time opponents turned out, and professional men and women in dark business suits stood shoulder to shoulder with construction workers in hard hats and laborers wearing sombreros and bandanas.

"Serna was a big supporter of organized labor, and we just wanted to show our respect for him," said Bill Coleman, a 48-year-old Placerville man in overalls and a powder blue hard hat who took time out from his work helping to build the new Cal-EPA building adjacent to City Hall. "We lost a lot when we lost him."

For Serna, who died at home Sunday of kidney cancer at the age of 60, the event was in part a way for him to thank his supporters. He helped plan parts of the funeral, requesting that the farm workers help send him off.

But the pageantry of the ceremony, which local television and radio stations broadcast live, might have overwhelmed even Serna.

Serna's casket arrived at City Hall shortly before 8 a.m. in a cream-white hearse escorted by police motorcycles and a helicopter, parking in the rear of the building.

Out front, the main entrance to the building was cluttered with red roses, flowers, cards and books left in honor of the mayor. Above the twin brass doors to the entrance, a huge green and yellow banner proclaimed Serna "Our Mayor Forever."

A large color photograph of the mayor also was posted above the doors, and another picture of Serna hung in the window of his second-floor office.

City Council members and other politicians huddled inside the building, waiting for the scheduled 9 a.m. start, while a handful of onlookers slowly filtered into the plaza across I Street from City Hall.

By 8:30 a.m., Serna friends and staffers paced around the building, wondering aloud whether the cold, gray weather would keep attendance at the services limited to just a few hundred.

Many of them wore "Serna for Mayor" buttons or yellow and green ribbons, colors that came from Serna's family crest and that match the school colors at California State University, Sacramento, where the mayor taught political science.

As the start time drew near, more and more people slowly began to assemble in the plaza and line the streets around it. Buses pulled up and deposited hundreds of farm workers, many of whom carried the red and black flags of their union.

Even as the crowd grew in size, people talked in low, hushed tones while mariachis played. And as the funeral procession made its way from the rear of City Hall toward the entrance to the plaza, the silence was broken only by the motorcycles of the police escort, news helicopters overhead and the clicking heels of the honor guards that accompanied the hearse.

City police officers, sheriff's officials and firefighters walked slowly behind the hearse and its escort.

Most wore dress uniforms and white gloves, and saluted when the pallbearers moved Serna's closed casket from the hearse onto a "church truck," a wheeled cart that allows the casket to be rolled along at waist height.

His eight pallbearers included some of Serna's closest relatives, friends and confidants.

Serna's son Phillip, two brothers, Reuben and Jess, nephew Jesse and son-in-law Edgar Mayorga joined former Mayor Phil Isenberg, adviser Marc Grossman and political guru Richie Ross in carrying and escorting the casket. They wore white gloves and had white roses pinned to their lapels as they wheeled the casket into the plaza.

There, his chief of staff, Gina Montoya, welcomed the crowd and introduced Rodriguez, the UFW leader who had come to Sacramento last week as it became evident that Serna's time was limited.

Before taking the podium to address the crowd, Rodriguez said he had been honored to be among those with Serna in his final hours, and he laughed recalling Serna's consternation with him as he tried to hang a photo of Chavez near Serna's bed.

"He said, 'How many of you Chicanos does it take to hang a picture straight?' " Rodriguez recalled.

Later, the union chief told the assembled crowd that Serna was a "man of conscience and commitment."

"Lots of people worked their way out of the fields like Joe did . . . ," Rodriguez said. "We're here because Joe Serna never forgot where he came from."

Rodriguez, who spoke to the crowd in English and then in Spanish, also led them in chants of "Que Viva Serna!" and chants of "Long Live Serna!" that the crowd continued as it marched around the plaza and down J Street to the cathedral at K and 11th streets.

Serna's widow, Isabel Hernandez-Serna, who is recovering from cancer-caused hip replacement surgery, was taken to the cathedral in a white limousine and helped into a wheelchair there as the parade slowly crowded into the plaza and tried to file inside.

The cathedral's capacity of about 1,400 was quickly filled with a mix of political powerhouses -- Gov. Gray Davis, San Francisco Mayor Willie Brown, Lt. Gov. Cruz Bustamante among them -- and farm workers dressed in blue jeans and work boots.

When the doors closed, more than 1,000 were left standing outside listening to the services via loudspeakers.

Inside the cathedral, the two-hour funeral Mass took on a somber and reverential tone marked by candles, incense, biblical readings and prayers.

The traditional Catholic ceremony was led by Bishop William K. Weigand and Auxiliary Bishop Richard J. Garcia. An additional 15 priests joined them on the altar. A small adult choir in purple robes sang, as did the 50-member Sacramento Children's Chorus dressed in formal black, white and red attire.

The casket stood draped in white cloth, a symbol of Serna's baptism. All around, the cathedral's dozens of stained glass windows mixed with the vivid array of floral arrangements bearing messages such as "Beloved Cousin" and "Querido Colega" (dear colleague.)

Weigand opened the services by speaking of the "fruitful life of Joe Serna."

"We know your pain is very great," the bishop told Serna's widow, son, daughter, mother and other family members seated in the front rows. "It's a great loss and we are in solidarity with you."

Later, Garcia gave a homily that alternated between Spanish and English and captured the dominant themes of Serna's life: his family, his Latino roots, his passion for children and education, and his regard for the city of Sacramento.

"All of us are better off in this city we call home because of this man and his contributions," Garcia said.

During the services, Serna's wife sat in her wheelchair, surrounded by family. She was still and stoic throughout the morning, sometimes tearful, often smiling as her husband's life was celebrated by those around her.

Isenberg, a former Sacramento mayor and state assemblyman, gave a eulogy that described Serna's life journey, from his humble beginnings in a farm labor community to his Peace Corps days in Guatemala to his triumphs in elected office. His talk, which even mentioned one of the low points in Serna's mayoral tenure involving controversial remarks caught on videotape, was laced with simple honesty and gentle humor.

Serna's son, Phillip, delivered the closing remarks. He thanked many people, including the clergy, the doctors and nurses who helped his father, Serna's friends "from those who knew him as a child to those who are pallbearers" and the musicians and children who sang at the Mass.

As the services ended, the Children's Chorus, accompanied by guitar, sang "De Colores," a joy-filled, Mexican song that brought a fresh round of both smiles and tears to the Serna family.

Serna was buried later facing downtown Sacramento in a shaded spot near the southwest area of East Lawn Memorial Park on Folsom Boulevard.

The mayor was buried in a white "Jalapeo Golf Classic" shirt, khaki pants and his golf shoes, still dirty from his last golf game last spring before he became too ill for the sport. His son had placed his father's favorite driver in the casket as well.

"They didn't want any dark suits or ties," said Grossman, his longtime friend. "Joe wore ties, but he never liked them."