Directors Notes on the Making of the Movie 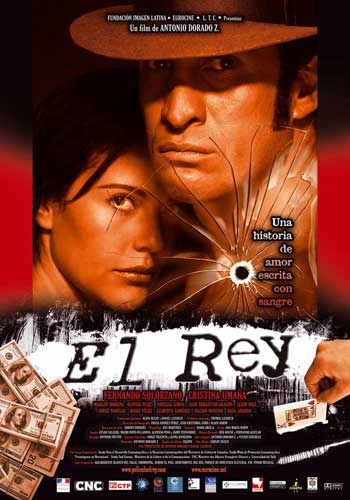 Directors Notes on the Making of the Movie

The overwhelming history of drug trafficking in Colombia is the topic of the film. It dates back to the 1940s, when former President Mariano Ospina Pérez launched an economic campaign to import hemp seeds from India, but received instead seeds of Cannabis sativa . It also recalls the presence of Alliance for Progress, an international foreign aid campaign for Latin America launched by President John F. Kennedy to banish the presence of the strong winds of communism that brought about the Cuban revolution.

El Rey , however, does not only draw its inspiration from the national and international historical context, but its protagonist is associated with a local character-the first great public myth at the onset of Colombia's drug trafficking. Newspapers of that time registered his funeral as a pompous event attended by 5,000 people at a time when the word "mafia" in Colombia was only associated with the dark history of Italy and the North American underworld. His antagonist, ¨El Pollo¨, is the recreation of a troublemaker of the 1950s, a time of great political violence in Colombia. Lieutenant ¨Maluco¨ is an intelligence agent working with D.A.S., the country's Department of Administrative Security, and considered by the press as the only police officer feared by delinquents because he was incorruptible. The character of Police Lieutenant Pulgarín is inspired on the multiple cases of corruption, in which law enforcement officers use their position for their own personal benefit. "El Periodista" makes allusion to Fulvio González , a reporter who lived during that period and did the research for the script.

The film documents many authentic elements. Several of the filming locations, such as the Plaza San Nicolás, the Plaza Caycedo, several streets and discotheques, were real scenarios of the beginning of drug trafficking in Colombia. Several of the extras appearing in the films are also real characters of this history but, because of legal problems, only could participate in secondary roles, keeping their names in anonymity.

Although the original project was to produce a documentary, by transforming the script, greater freedom of expression was achieved. The film aims to recreate a myth, and its characters and facts were accordingly sculpted not to represent or rebuild real facts, but to recreate a dramatic structure that reflected, from a realistic esthetic treatment, the attitudes of the characters involved in this chronicle.

For many years I have been a documentary director, editor and professor of audiovisual communications at the Universidad del Valle. I've always felt a strange attraction for cinematic genres, particularly the genres of gangster, western, musical and terror (my thesis was on the Vampire in Film). A long time ago, I read a text by Andrew Tudor that analyzed the positive aspects of the genres and in classes on film history I always looked for a way of talking about the potential for these kinds of films to be made from our own perspective. In particular, I consider the gangster genre, in addition to having appeal with the public, as an excellent pretext to tell certain key aspects in our country's history. Year after year I tried to generate enthusiasm for the topic, and after announcing it so many times I became obsessed with the idea of making a proposal about our own bad guys.

Then, being a student specializing in audiovisual studies at the School of Social Communication at the Universidad del Valle, in Cali , we undertook an investigation about the impact of drug trafficking in the city of Cali with the purpose of making a documentary. I was lucky to coordinate the research about the origins of drug trafficking and its firs bosses. From there emerged a documentary project which precipitated a reflection on what drug trafficking had left us. I wanted to make a documentary about trafficking's origins, but I was tired of conducting interviews and fixed photos, so little by little I abandoned the idea, perhaps because in my heart I really wanted to realize my life's dream that all directors have: to make a feature-length film.

I began with a script based on the history of a character, and I was fortunate to win the open call of Film Directing in Colombia , which basically gave me the opportunity to be a film director. But the funds were insufficient, converting the award to what seemed like more of a punishment than a prize. Not only was I the Director, but I also had to be the writer and producer, and all these jobs had to be undertaken nights, weekends and vacations, sacrificing time I still owe to my wife and children. It was a difficult period of uncertainty, where only my stubbornness and sincere desire to make a good film allowed me to find with perseverance a light at the end of the tunnel. Later I received an invitation to the festival of Huelva, developed a friendship with the Lesoeur family, obtained the support of the Fonds Sud Cinema frances, the backing of the Universidad del Valle, the Parque de Industria Cultural and La Industria de Licores del Valle; a meeting with the Producer Aline Hleap and contact with the CTP of Spain. My brothers and sisters also pushed me and became accomplices in the making of the film.

A central problem was always the script. EL REY was my opera prima. It had been an ambitious project that began in the 1930s with the origins of the so-called "political violence in Colombia " and ended in the 1970's. It was very hard for me to understand that I had to simplify the historic period, until finally I decided to focus on starting in the mid 70's, an era which I could recreate more sincerely. This was the time that my family came to live in Cali in the neighborhood San Nicolas, a poor neighborhood which is the epicenter of where the film originates. Some of the characters and situations in the film are things that I lived, I imagined or I was told. The script started to come together, I received much advise (maybe too much), but I returned to my role as editor and edited the film in the way that seemed to me to be the truest to life.

Filming was very difficult. Days and nights were confused and the dream of finishing the film well was always being threatened by terrible and real nightmares which we confronted each day. I had imagined that the calm would come when I could pre-edit after we finished shooting in Colombia . But there was no time, as we had to continue to shoot a few weeks later in New York , Paris and Madrid , in a process of location scouting that would allow me to find the perfect spot from which to film the story in the best way possible.

Now that I'm on the other side, I see the finished film and I feel he satisfaction of having made a good film, in which all the hands that helped me are evident. When I see the movie projected I think these sequences are a good part of the discourse I wanted to transmit to my students of the history of film. El Rey uses a unique style of self-representation to hold a mirror to Colombian reality. It is necessary to break with the Hollywood tradition that represents Colombians in particular and Latinos in general as "the other" (non-white), the inferior being that acts brutally or ingenuously (in the best cases), without considering the enormous complexity of their situations in an ideological, political and social context.

The greatest satisfaction at the end of screenings has been the enthusiastic and joyous reactions of the actors and members of the technical and production team. I think all of the effort and perseverance has been worth it. I have received help from many family members, friends, students and companies, not only in Colombia but also in France , Spain , and the United States . I only hope that those who see EL REY enjoy it, because it reveals the creative effort of a team that came together because it believed in a dream.

Jose Antonio Dorado Zuniga received his BA in Journalism, MA in Colombian and Latin American Literature, and is a specialist in Audiovisual Methods. Since 1990, he has been a professor the he Audiovisual Department of the Universidad del Valle. He has participated in numerous documentary projects that have been broadcast nationally and internationally. As a documentary director, he has produced 28 projects and obtained 26 mentions in events including the San Juan Cinema Fest of Puerto Rico, the International Film Festival in Bogotá, he International Film Festival in Cartagena and the selection as among the best audiovisual programs in Latin America at he 11 Meeting organized by UNESCO and INPUT (International Public Television).

Cocultura Fellowship for the Creation of a Documentary for the Project Biografia de un Pensador. Colombian Ministry of Culture, 1997.

Award for best documentary from a regional station, for the program BuenAVENTURA , XXXVI International Film Festival of Cartagena . Cartagena, Colombia, 1996

This story has been posted in the following forums: : Headlines; COS - Colombia; Drugs; Crime; Movies