Depending on your point of view, Liberia RPCV Archer Di Peppe is either the conscience of the Fredericksburg area or one of the region's most annoying residents 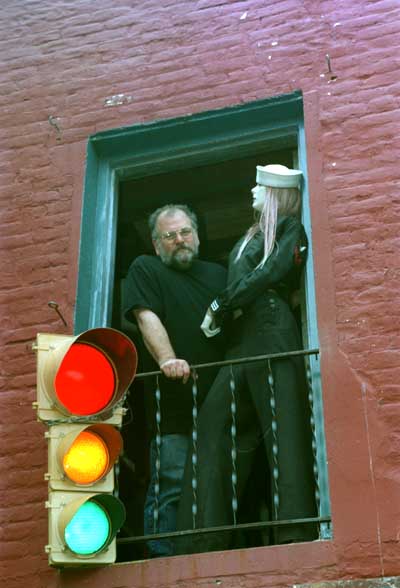 Depending on your point of view, Liberia RPCV Archer Di Peppe is either the conscience of the Fredericksburg area or one of the region's most annoying residents

On the Spot: Archer Di Peppe

Depending on your point of view, Archer Di Peppe is either the conscience of the Fredericksburg area or one of the region's most annoying residents.

• On the Spot archives

Archer Di Peppe was driving about 1,000 miles a week as a drug rep for a pharmaceutical company when he caught a TV show on PBS one night.

Bill Moyers was interviewing writer and mythologist Joseph Campbell. The interview would change Di Peppe's life. Campbell told stories about Norway and Eskimos and Egypt "and it would all be the same story," Di Peppe said.

The story of hopes and dreams and fears and love. Moyers then asked Campbell what he thought life was about.

Find your bliss, Campbell answered. Find what you love to do and go do that. "It was kind of like a real epiphany for me," Di Peppe said.

Within two weeks, he had rented the building that now houses Neat Stuff on Amelia Street in Fredericksburg. He had quit his job as a traveling salesman. And he went from making $40,000 a year to earning roughly $4,000 in his first year as a shop owner.

Di Peppe—who also taught school for about 10 years—had always loved history and collecting, and a store that combined both was his personal bliss. Today, he also earns money as an appraiser.

Di Peppe, of course, is known as much—if not more—for his activism. Depending on your point of view, he's either the conscience of the Fredericksburg area or one of the region's most annoying residents.

He's attended dozens of public meetings, marched down city streets and was part of a group that sought the removal of City Council members. He has organized and led grassroots movements that influence elections, call for open government, question development and support preservation.

He wants folks to know he doesn't hate the Silvers, developers of Central Park and the planned Celebrate Virginia tourism campus.

He just thinks the Silver Cos. and other developers have more influence than the average resident, and that bothers him. "I will continue to fight that battle as long as I'm here," he said.

Q: Who has been your greatest influence and why?
A: My parents grew up during the Depression. They gave me all the things they never had as children including the opportunity to go to college. (Di Peppe graduated from Madison College, which later became James Madison University. He also earned a master's degree from the University of Richmond.) They also loved me enough to say no to me when they believed that what I wanted was not in my best interests. I didn't understand it then, but now that I have my own kids, I hope I can be half the parent that they were.

Q:How do you want to be remembered?
A:As an honest, decent person who wasn't afraid to fight for what he believed.

Q:What's your favorite hangout and why?
A:I have spent most of my days for the last 14 years at my shop. On any given day a half dozen people will drop by to talk about what is going on in the Fredericksburg area.

Q: You suddenly have $1 million, but you have to spend it all within 72 hours. What would you buy?
A: There are many unselfish things a person could do, but if you want to know what my selfish fantasy would be, it would be to buy a sailboat. I would love to sail up and down all the coast lines of the U.S. and up to Alaska in the fall in time to see the Northern Lights.

Q:God just called and said he's giving you an extra hour each day. How would you spend it?
A:I have spent a lot of time away from home working on growth and preservation issues. I would spend that hour each day with my family. They have paid a high price for my political activities.

Q:Your friends would be surprised to learn you know every word to what song? Briefly explain.
A:Small Victories by Garnet Rogers. You would have to hear the song to understand.

Q: What is the most important value you look for in a person? Briefly explain.
A: Courage. We are on the planet such a short time. Without courage, nothing of any value can happen. It is not failure that stops people so much as the fear of failure.

Q: Classmates from your high school would be shocked to learn that you ...
A:have survived this long. Imagine a younger version with much more energy and less self control.

Q:What would you change about Fredericksburg if you could?
A:I would wish that the average person who lives here would come to understand that it matters very much how we grow. The next time you are inching your way down 3 west, or crawling down 610, or stopped on 17, think about how poor planning affects the quality of your life every day.

Q:What was the first concert that you attended, how old were you and what was it like?
A: When I was about 10 we went on a school trip to see a symphony orchestra play in an old theater in downtown Norfolk. It was an incredible concert. I sat on the edge of my seat most of the time. All of those people got together and created something very beautiful for a bunch of kids. It was the first time I understood how thrilling live music could be.

Q: What is the most interesting or amusing fact that you have heard lately.
A: Never get history confused with what happened. History is what the winner wanted you to believe.

Q: What is the best advice that anyone ever gave you? Briefly explain.
A: My father never actually said this to me, but he taught me something by the way he lived his life. Class had nothing to do with wealth and power. Class is not taking advantage of someone just because you can.

Q:Who would you take to lunch? Where would you go, and what would you eat and talk about?
A: I would have liked to meet Gandhi. He proved that a single person with enough moral courage could change not only himself and his community, but his country and his world. Gandhi survived for much of his life on lemon juice and groundnuts when he wasn't fasting. He liked to take long walks. So I guess I would take him over to Goolricks for homemade limeade and then walk down to the hill that overlooks the bend in the river near Fall Hill Ave. I would hope that he would teach me something about patience.

Q: What has been the best day in your life and why?
A: The two days that our children were born. My wife and children came through safely.

Q: Why don't you run for office?
A: I do not like to wear suits and go to meetings. I tend to tell people exactly what I am thinking when they ask me. (Even when they don't ask) I could not vote for something that I felt was wrong even if every constituent I had wanted me to do so. I believe I have been able to accomplish more by being a private citizen and activist.

Q: What is the most unusual encounter you've ever had with a customer in your shop, Neat Stuff?
A:A former student tracked me down after 25 years. He had a very difficult time in school because of learning disabilities. He was able to hang in there and he wanted me to know that today he has a good job and 30 people work under him. Somehow he heard about my shop and drove 50 miles because he knew I would want to know that things worked out for him. He didn't know that I had thought about him many times over those years. Teachers touch so many lives, but in most cases, never get to hear about them. It meant a lot me, so I hope that if there is a teacher in your personal history that made a difference, that you will go track them down.

Q: What misconceptions might people have about you?
A: There are some people that believe that I hate the Silvers. I don't hate anyone. Hatred will eat a person up inside. I do not believe that any special interests are entitled to special favors due to their wealth. I do not believe that any special interests should be able to be a public official's largest contributor without the public being able to find out about it. I believe that decisions that will affect the look and function of the area for years to come should be made by people other than those that stand to make the most money from the development.

Q: Where's your favorite local place to have dinner, and what do you order?
A: Olde Towne Steak and Seafood. King cut prime rib. I guess I have more to learn from Gandhi than just patience.

Q: What's the best example of community in Fredericksburg? Briefly explain.
A: I was one of the founders of Rappahannock Area Grassroots, so I tend to like groups such as Citizens against Sprawl, The Coalition to Save the Chancellorsville Battlefield, and the Committee of 500 in Spotsylvania County. These are all groups that get directly involved in the political process to make positive changes in their communities. They all work on growth and preservation issues.

Q: Your public face is one of passion and agitation. How do you relax?
A: I like to read, and I get a great deal of pleasure writing articles for Front Porch Magazine

Q: What are your plans for July Fourth?
A: I am glad the fireworks are coming back to a place near the river. I use to always watch them from the downtown bridge. The river is beautiful and you can see the fireworks reflect off the water. You can see the skyline of Fredericksburg on one side and Stafford Heights on the other. People bring their children and if you pay attention, you can experience the wonder of being 10 years old again. Somehow I don't think people got the same experience from a parking lot.

This story has been posted in the following forums: : Headlines; COS - Liberia; Speaking Out; Preservation