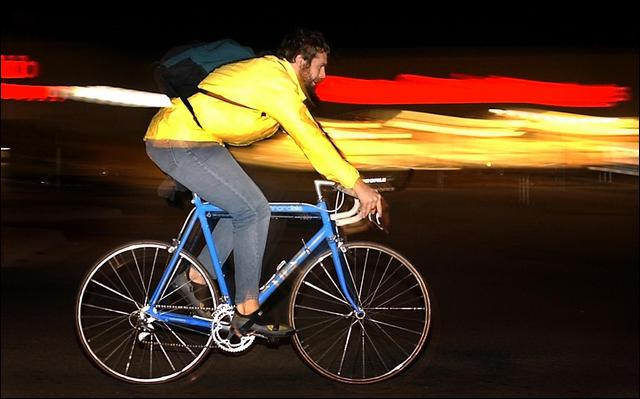 Christie and Eric Nelson aren’t going to berate you for climbing behind the steering wheel of your SUV. The Nelsons won’t knock on your door with pamphlets extolling the virtues of walking and biking. And the Mankato couple won’t be picketing local convenience stores begging people to stop wasting so much gasoline.

Saying no to gas

Caption: Eric Nelson of Mankato rides into the darkness on his way to work. Nelson walks or bikes most places for the environmental, spiritual and health benefits. Photo: John Cross

Christie and Eric Nelson aren’t going to berate you for climbing behind the steering wheel of your SUV. The Nelsons won’t knock on your door with pamphlets extolling the virtues of walking and biking. And the Mankato couple won’t be picketing local convenience stores begging people to stop wasting so much gasoline.

Instead, the Nelsons, who turn the ignition switch on their car about one day in every five, are content to provide an example for vehicle-addicted Americans - proof that there is another way to move.

But the one time they have trouble holding their tongues is when they hear people with healthy, working legs complaining about the high price of gasoline. An article in The Free Press about people grumbling in response to record fuel costs while doing nothing to change their driving habits prompted Christie Nelson to respond with a lengthy essay.

We talk about the prices at the pump like we do the weather - unavoidable, sure and true. We play the victims of the storm - getting pounded at the pump. This attitude is aggravating to me. If you are able bodied, do not require a vehicle for work and live in Mankato, get moving!

While her essay begins with that semi-rant, Christie Nelson is far from a scold. In fact, it’s a good bet that people who know her consider her to be somewhat upbeat, a bit enthusiastic about life.

Biking and walking pretty much everywhere is really doable, she said. And not only that, it’s enjoyable.

For instance, when she rides her bike from her home not far from downtown Mankato to South Central College, Christie isn’t thinking about that long, sweat-inducing, muscle-fatiguing ride up the hill and out of the valley.

"I cross over the Minnesota River and I look down the river and say, ‘Wow, what an awesome creation. What a beautiful place.’" she said. "... It seems really natural to be able to say ‘Thank you.’ Commuting in a car, I think we miss that - ‘Thank you for today.’"

So it wasn’t $2.90 gas earlier this year that prompted the Nelsons to leave their hybrid car in the garage 80 percent of the time. They’ve been consistently ranking their car as their third best travel option for about two years now.

The physical, emotional and spiritual gains are great when you bike and walk. I think all of us know exercise is essential for a healthy body. It feels good to move our bodies, propelling it with our own power. In addition to keeping fit, we look forward to our commute as a time to refresh our minds, reconnect with one another and thank our Creator for the blessings of the new day.

Christie, 27, who previously worked at the Harry Meyering Center, was required to have a car at work to transport clients. But she regularly biked to classes at South Central College, where she’s studying to be a registered nurse. And when she begins her new job at Immanuel St. Joseph’s Hospital, she plans to bike there.

Eric, a metallurgical engineer at the Dotson Inc. foundry, has been biking or walking to work for years.

"Really it’s not doing anything out of the ordinary," he said. "Everybody learned to walk at one point in their life - about one year of age. People learn how to ride a bike at a young age. It’s just doing things that come naturally."

For the vast majority of Americans, however, what comes naturally is getting in the car, sports utility vehicle or minivan when they need to get from home to anywhere more than a block or two away.

Eric suggests that people just try the healthier, cheaper, more environmentally kind approach - preferably on a day when there’s no time pressure. Just walk or bike to work or the store or to church and see what you think.

"Once you have a good understanding, then it becomes real and you have a choice," he said. "But until you try, you have no idea."

Eric, 28, can walk the two miles from home to Dotson in 25 minutes, about 15 minutes more than it takes to drive the six-stoplight route. Christie said she can bike to SCC in 17 minutes, no more than seven minutes longer than driving. They walk or bike virtually all the way across town to attend Hosanna Lutheran Church.

We forget most of our fellow human beings on this planet don’t even own cars. Why do we think we deserve or are entitled to drive wherever, whenever and whatever we want, and then complain about the price? Move beyond society’s definition of how a proper person should travel.

The Nelsons are quick to recognize that not everyone can make that choice. People have legitimate reasons for driving - and complaining about high gas prices - if they have a physical disability, are very old or work at a job where a vehicle is required.

But most folks are entirely capable of self-propulsion. And Eric and Christie have an answer for most excuses. Too much to carry? Bike racks with sidebags or even a backpack can haul plenty. Too old? They have examples of senior citizens riding bikes across the country. Too out of shape? Start small and build up the endurance.

"It was difficult initially," Christie said of climbing the hill to upper North Mankato. "I was in about the lowest gear on my bike and peddling with all my might."

Now she’s in a higher gear and moving much faster. And the ride home is a blast.

The obvious question, of course, is the potential misery of biking or walking in the sometimes nasty Minnesota weather. Eric said heavy rain is the only thing that sometimes forces him to drive simply because he doesn’t want to work in drenched clothing.

Although they don’t expect they’ll ever convince a large percentage of Americans that cars should be a second or third choice when it’s time to go somewhere, they’ll gladly accept any level of converts they can get.

"You pick up a few people here and there," Eric said. "And that’s how things get started."

And Christie, despite joking that people consider her and her husband crazy, her essay defines the word another way.

Are you still driving and complaining? That’s crazy. ...

The source of Eric and Christie Nelson’s motivation - the impetus for walking an hour to church, biking for miles on a scorching summer day to get to college classes, trudging through snow to run errands or go to work - is varied.

Eric said his mom walked to work for years. And his first dramatic foray into alternative forms of traveling occurred while the Albert Lea resident was attending the South Dakota School of Mines in Rapid City.

"I biked home from school one year," he said.

Christie said she grew up in a nonrecycling, conversion-van driving family, but majoring in biology and environmental studies changed her thinking.

"It brought a new level of awareness and responsibility, I guess," she said.

The couple, who met while fifth-graders in Albert Lea, had an eye-opening experience about appreciating the luxuries of America while serving in the Peace Corps in the South Pacific island-country of Vanuatu.

And they learned about America’s natural resources and beauty - not to mention getting a lesson about their personal stamina - while spending four months walking the 2,100-mile Appalachian Trail.

This story has been posted in the following forums: : Headlines; COS - Vanuatu; Conservation; Bicycles