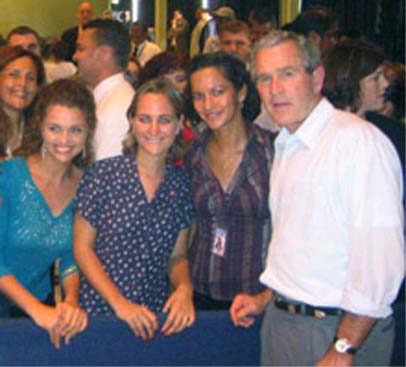 WASHINGTON, D.C., November 17, 2005 – During his visit to the American Embassy in Panama City recently, President George W. Bush singled out Peace Corps volunteers for "working on the front lines of humanity."

The President and First Lady Laura Bush met with Peace Corps volunteers and discussed the projects and progress of their work as part of the President's recent tour of Latin America.

Discussing the volunteers' work — especially in the field of HIV/AIDS which the President’s Emergency Plan for AIDS Relief helps fund — the President and the First Lady reaffirmed their support for the Peace Corps and its volunteers. 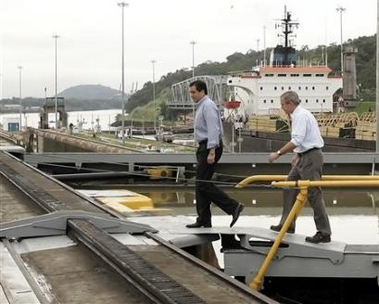 Combating HIV/AIDS is a priority in Panama from both the Peace Corps and the President, as the country has the second highest infection rate in Central America. Rural health volunteers work with the Ministry of Health to train indigenous health workers in nutrition, reproductive health, and HIV/AIDS awareness. Volunteers in environmental health develop programs to educate poor communities on hygiene, sanitation, and HIV/AIDS prevention.

To commemorate the President's visit, the volunteers presented the President with a Peace Corps/Panama baseball cap.

There are currently 151 Peace Corps volunteers serving in Panama. Volunteers are working in the areas of sustainable agriculture systems, community economic development, environmental health, community environment conservation and health and HIV/AIDS awareness and prevention. Since the program's inception in 1963, the Peace Corps has sent more than 1,400 volunteers to Panama. To learn more about Panama, please visit the Where Do Volunteers Go? section.