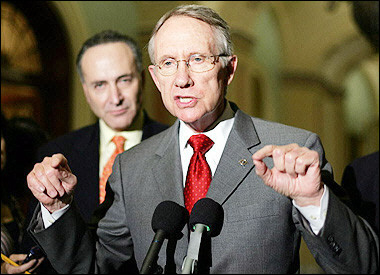 "President Bush is a stubborn man, refusing to adjust failed policies at home and abroad, and acting like he's still running for president instead of serving as one," U.S. Senate Minority Leader Harry Reid said. "Look what's happening to our economy. He won't back off on his efforts to ruin Social Security, Medicare, Medicaid, the Peace Corps," the senator said.

Caption: US Senate Minority Leader Harry Reid, D-NV, talks with the press about the closed session which he called for 01 November 2005 at the Capitol in Washington, DC. The US Senate held a rare secret session to discuss a scandal that led to the resignation of a top White House aide last week and on the intelligence used to justify the 2003 invasion of Iraq. The two-hour secret session came at the demand of opposition Democrats, who said the closed-door debate was necessary to allow for a full, open discussion on alleged manipulation of prewar intelligence.(AFP/Tim Sloan)

U.S. Sen. Harry Reid, D-Nev., speaks to reporters Nov. 16, 2004, at the Capitol in Washington after winning election by his Democratic peers as the Senate minority leader

President Bush is a stubborn man, refusing to adjust failed policies at home and abroad, and acting like he's still running for president instead of serving as one, U.S. Senate Minority Leader Harry Reid said.

"President Bush and his sidekick Cheney have been very, very stubborn and quite mean-spirited at times," Reid said in an interview with the Associated Press.

"I think he should be a commander in chief and not a campaigner in chief. This whole administration can't get out of the campaign mode," the Nevada Democrat said late Tuesday.

"Let them start governing a little bit. They are great at campaigns. Bush's brain, (White House chief of staff) Karl Rove, is a very good campaigner."

Reid, who has sharpened his criticism of Bush over the past month, said Bush's stubbornness is apparent not just in his refusal to budge on the war in Iraq "but on everything we do."

"Look what's happening to our economy. He won't back off on his efforts to ruin Social Security, Medicare, Medicaid, the Peace Corps," the senator said.

Republicans countered that Reid is the one who continues to play partisan politics with the war in Iraq and other issues.

"Senator Reid has a taxpayer funded, self described 'War Room' inside his Capitol office that has relentlessly attacked the president since January," said Brian Nick, spokesman for the National Republican Senatorial Committee.

"Senator Reid has personally used the Senate for nonstop partisan attacks while he and the Democrat leadership offer no agenda of their own," he said Wednesday from Washington D.C.

In an our-long interview in his Reno office, Reid expressed mixed feelings about his role as the primary mouthpiece for Senate Democrats in criticizing Bush administration policies.

"I made it as far as I have by not being a partisan, but right now I have a job to do," said Reid, who was elected to the Senate in 1987 after serving two terms in the House.

"It's hard for me to be always nagging ... I like to get along. As I've said, I'd rather dance than fight. But the American people have been pushed against a wall and I'm fighting for them," he said.

Reid recalls how Bush declared upon his first election in 2000 that he wanted to be "a uniter, not a divider."

"That's Orwellian because it has been just the opposite," the senator said.

"The Republican's last budget, his budget, they call it the 'Budget Deficit Reduction Act' but it increases the debt by $30 billion. How can you say that with a straight face?"

Reid said he's a firm believer in the two-party system and the responsibility of members to do what they can to strengthen their own party.

"But you have to do it within a framework of honesty," he said.

"You can't say I'm a uniter then do everything you can to divide. You can't have a Budget Deficit Reduction Act that increases the debt by $30 billion.

"And I think the American people are onto this. The country is broke. And instead of asking somebody to throw him a rope, he just keeps digging deeper," the senator said.

Reid said during Bush's last five years as president, the nation has borrowed more money from foreign interests than in the history of the country combined prior to that time.

He said when Democrats were in the majority in 1994 they implemented "a real deficit reduction plan that put this country on the road to economic vitality that had never been seen before."

"President Clinton retired the debt by one-half trillion dollars and these people are running it up by $10 trillion," he said.

He said Federal Reserve chairman Alan Greenspan "lectured Democrats" repeatedly about how reducing the federal debt is the best way to spur the economy, but has remained silent on the matter since Bush took office.

In regard to Iraq, Reid said both the administration and Congress are lagging behind public opinion that increasingly favors a withdrawal of troops from Iraq.

"It's pretty clear we're on our way out. It's a question of when," he said.

U.S. Rep. John Murtha, D-Pa., set off a firestorm last week when he proposed all of the 160,000 U.S. troops now in Iraq be pulled out over the next six months.

"Of the 535 members of Congress, no one is closer to the U.S. military than John Murtha," Reid said of his colleague, a decorated veteran of the Korean and Vietnam wars.

Reid said Murtha's call was consistent with a resolution the Senate approved last week calling for 2006 to be a year of "significant transition" in Iraq.

"Nobody supports the immediate withdrawal of troops. But we now have 2,100 Americans dead ... and the war is costing $2.5 billion a week," Reid said.

"It's clear, with this war, people have lost confidence in the administration."

This story has been posted in the following forums: : Headlines; Speaking Out; Presidents - Bush; Congress; Politics