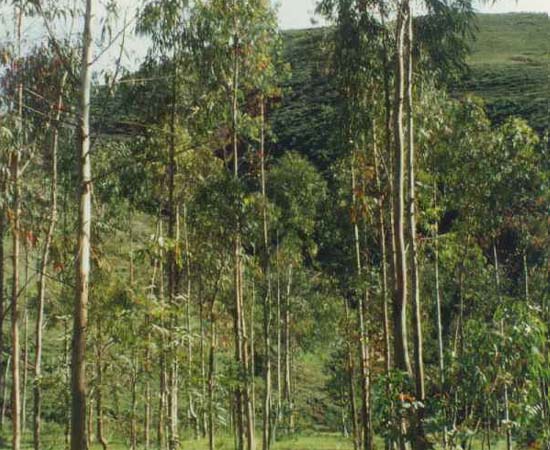 "Ask not what your country can do for you, but what you can do for your country." John F. Kennedy's words during his inaugural address inspired this young college freshman, and I never forgot them. When the Peace Corps was looking for forestry professionals to embark on a tour in Peru, I signed up and, at the age of 22, soon found myself in the high Andes, confronted with the task of convincing the local forest engineer that the mortality he was experiencing in his nursery was not the norm.

Warren "Bill" Weed, Jr. is a consulting utility forester with NSTAR Electric, Westwood, MA. His hobbies are writing short articles for publication and for personal enjoyment. Hunting, skiing, and observing nature with family are also his favorite pastimes.

He is a RPCV (Returned Peace Corps Volunteer) serving in Peru from 1965-67, where he was assigned to the Peruvian Forest Service and responsible for a forest tree nursery project in the high altiplano region of central Peru. This short story is one of his many experiences that he would like to share with Danvers Herald readers.

"Ask not what your country can do for you, but what you can do for your country." John F. Kennedy's words during his inaugural address inspired this young college freshman, and I never forgot them. When the Peace Corps was looking for forestry professionals to embark on a tour in Peru, I signed up and, at the age of 22, soon found myself in the high Andes, confronted with the task of convincing the local forest engineer that the mortality he was experiencing in his nursery was not the norm.

The nursery, at an elevation of 10,000 feet above sea level, is the altitude which all-commercial airplanes are pressurized. Our mission was to cultivate Eucalyptus trees for distribution to Andean villages throughout the central mountain (altiplano) region of Peru, between altitudes of 10,000-13,000 feet above sea level. Above the later range, the growing season is too short and the frost is too great to sustain the trees.

For half the year, the Peruvian foresters and I would meet with town members in their councils to establish the trust needed for our program to succeed. As much distrust of government persisted, not all communities participated in the Forest Service program. But when trust was established, contracts were signed, sites selected, and during the rainy season, the Eucalyptus trees were transported to the community lands.

The nursery near Hucancayo, Peru, was experiencing seedling mortality of 98 percent. To gain insight into the sudden tree mortality, I ordered reference books from Australia on Eucalyptus Trees, and soon discovered that the trees were not dying of a mysterious disease, but of "transpiration," or the rapid loss of water from the leaves.

The Eucalyptus tree was not native to Peru, but imported by Spanish priests during the early 1800s from Australia. In its native land, Eucalyptus is only viable to 2000 feet above sea level. However in Peru, the tree has adapted to the harsh climate. Frost resistant stains have developed through natural section to provide fully-grown trees that provide firewood, and timbers for housing. With sufficient irrigation, trees can reach maturity in 12 to 16 years.

As a solution to the high mortality, I asked the head forest engineer if I might conduct an experiment. If I were correct, then seedling production would multiply significantly. He was reluctant and refused, saying, he was "the head of this nursery," and that he, "would make such a determination if necessary."

At this instance I learned, although you might be right, it is better to let the other side win. As the months slipped by and as I gained his respect, I again suggested the experiment, presenting him with text materials and letting them speak for me. These were in English, and although I knew he could not understand the words, he pretended he did, thus paving the way for my next step. Embarrassed he could neither read nor understand English he finally relented. To prove or disprove the theory, I suggested that we, not I, experiment with several seedling beds, by covering them with a canopy of branches from other Eucalyptus trees supported by branches stuck firmly in the ground. The bright sun, through the thin atmosphere of 10,000 feet, could not reach the shaded seedlings.

Keeping the soil moist and the seedlings shaded would halt the "transpiration," or loss of water from the leaves faster than the roots could replenish it. Astoundingly, during the next few weeks, the survival of the seedlings in the shaded seedbeds exceeded 98 percent. This was a complete reversal of the 98 percent mortality!

Even with this evidence, there was no movement to change the operation of the nursery. This was another lesson learned: saving face for the head of the nursery was more important than increasing production. Any changes would occur after my tenure and not before. My personal triumph in hand, his respect for me intact, my job was done, and I was ready to move on. His face was saved. Later he would gain the credits for the work I had shown him. I was convinced of this.

Insights and valuable lessons learned: Respect must be earned before new ideas can be presented. Timing is important in presenting new ideas. Saving face was more important than saving trees. The politics of being right do not necessarily overcome the politics of might.

Throughout my career I have thought of this valuable experience and have made it work for me in all areas of my life. We are all humans and bound by our human condition. The cross-cultural experience from Peru gave me a new language, a deeper understanding of humility, and that we are all bound together within the unit of structure called the "family," individual, extended and the world.

Bill Weed can be reached at um4esta@hotmail.com with comments and questions.

This story has been posted in the following forums: : Headlines; COS - Peru; Forestry