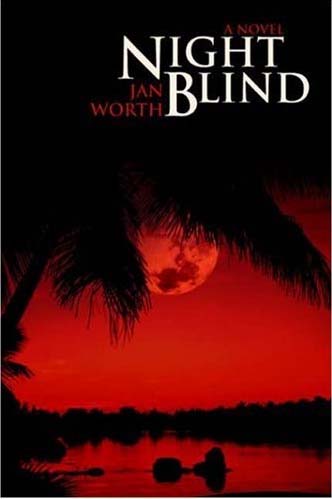 Tonga RPCV Jan Worth has written "Night Blind," the story of a ragtag bunch of Peace Corps volunteers after the murder of a fellow volunteer shakes up their little subculture in an eccentric Polynesian country. The book explores the aftershocks of murder, a great love, and the protagonist’s struggle to come of age 9,000 miles away from home. The book was inspired by the murder of Peace Corps Volunteer Deborah Gardner in Tonga in 1976. This excerpt comes near the end of the book when the protagonist, Charlotte Thornton, who's struggled with survivor guilt in the face of the brutal killing comes momentarily face to face with death herself and shows how her Tongan family unquestioningly takes care of her and how she comes to terms with her own need to survive. The book is available at Amazon.

From Night Blind by Jan Worth

[The narrator’s name, Charlotte, is Salote in Tongan]

…I fell into a blessed sleep. I didn’t know where I was when the rumbling woke me up. My eyes popped open, seeing nothing but dense black. Even through I didn’t grasp what was happening at first, my heart was already beating hard, alarmed. Then the cot jumped and dumped me out onto the floor. And then the cot leaped over and landed on me. That was when electrical pops and explosions started. And I realized I was in the middle of a fucking huge earthquake.

The bucking and rumbling got worse. Pots and pans and books and bottles fell off the shelves and then the shelves themselves crashed over on the telescope and in seconds I heard screams and an infernal, metallic banging.

With the strength of adrenaline I pushed the cot off me and got up. The earthquake threw me down and I banged my head on the corner of a shelf. Three times I got up and tried to make it to the door, and three times the earthquake threw me down. The fourth time I made it, screaming, into Tevita’s yard. Spilled into the coral driveway on my knees, I vomited with fear. Reliable physics gone, palm trees swayed wildly and to my horror, I saw the ground rolling toward me in waves. Concrete cracked and glass broke. I couldn’t stand up. Dogs howled.

I was going to die 9,000 miles away from home. My heart was pounding so hard I could feel it in my stomach, my eyeballs, my lips.

The incessant banging on metal clanged on, as terrifying as the quake itself. Somewhere in the distance I heard Filipa’s voice: “Salote, are you there? Are you there?”

And then it was over and the trees settled down and the ground stopped rolling and I was still alive. I was shivering and couldn’t stop. A huge palm tree lay cracked and collapsed on Filipa’s cooking porch, the concrete blocks in a jumble underneath. Kids yelling “mofoike! earthquake!” So weird, their yelling almost happy, as if they’d been on a roller coaster. Tevita and Filipa were at my side, helping me up. Rare hugs, which I hungrily returned.

“Are you okay? Are you okay?” Everybody was out in the road, and Tevita and the teenaged boys were running back and forth, checking on all the aunties. Filipa called out the kids by name and they came immediately, for once. No one was hurt.

“What the hell was that banging?” I finally managed to ask, my teeth chattering, my body still shaking out of control. “Tupou, hang on to Salote,” Filipa ordered, and my nemesis grabbed me and held me up.

“Now you know that the old religion lives,” Filipa said. “When the god of the underworld shakes us, we bang on metal to scare him away.”

“Jesus Christ, Filipa, it scared the hell out of me.”

“That’s the point.” Tupou grabbed me because I was about to fall down.

“Salote needs to sit down,” she told Filipa. Tupou guided me to the nearest stump. But it wasn’t a stump. It was my whale vertebra, tossed from the hut. She eased me down on it. Somebody produced a blanket, and Tupou tucked it around me.

“I just realized that I love you,” I told her.

“I mean it. I love your mean, cruel self. I’m crazy about you.” And she smiled at me, a lovely sight.

After sweeping up the worst of the broken glass and tucking some pots and pans back onto their shelves, Filipa and Tevita clustered with the kids and wouldn’t let me out of their sight.

I didn’t have the will to disagree. But first I had to check inside my jumbled house. Taking a deep breath, I ventured over the threshold. The telescope. Damn. I lifted off a pyramid of books, and there it was, nestled in the mats from last night. I pushed off the books and stood the telescope up on its tripod. It seemed okay. Then I shambled back to Tevita’s house and sought my shelter for the rest of the night. The kids brought out piles of mats and tapa cloth and I slept as soundly as I’d ever slept in Tonga, cushioned by a pile of small bodies as warm and innocent as puppies.

Padding around the chaos in my fale the next morning, I felt raw and greatly exposed. The day was brilliant, the sunlight mockingly cheerful, as if the little turmoils of the people of earth were nothing much. But I was still alive.

I went to my row of amulets, stones, shells, a piece of driftwood, the kava drinker, and the sandalwood box. They’d all been tossed off the windowsill. Some had fallen off the window into the bushes. I reached down and got them. I touched each one and put it back. Living in Tonga I had the fewest possessions of my life. Enough plates for three or four, a saucepan, a spaghetti pot, a frying pan. But in the morning’s bleached light, what I had seemed like far too much. I felt so tired that picking up a single dish threatened to exhaust me. But I was still alive.

This story has been posted in the following forums: : Headlines; COS - Tonga; Writing - Tonga; Gardner