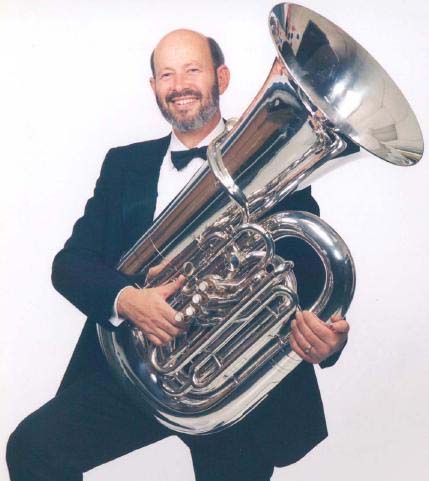 Stockton Symphony gives tuba its due with Vaughan Williams concerto

By Glenn Pillsbury
Special to The Record

In the pantheon of musical instruments, the violin and piano reside at the top of the heap for use in the solo concerto genre. Toward the bottom of that list, perhaps just above the triangle, is the tuba.

A vital contributor to the deep sound of the orchestra to be sure, the tuba does not jump to mind when you think of the concerto repertoire. Instead, the instrument is usually stereotyped as useful only for simple harmonic emphasis or as the go-to choice for lighthearted comedic effects. It's a lack of respect that only Rodney Dangerfield could love and a situation that's all too familiar to Stockton Symphony tubist Douglas Hunt.

"Most people think that the tuba is just loud and plays two notes or that it's kind of elephantine," he said. "It's something we try to correct, but it's really difficult."

Unlike Dangerfield, though, tubists and their instrument finally garnered some respect in 1954 when English composer Ralph Vaughan Williams wrote the first tuba concerto as part of the London Symphony Orchestra's 50th anniversary celebrations.

Vaughan Williams "explored the potential of the instrument, and (the concerto) shows the tuba can be quite expressive and lyrical," Hunt said. "It can be quite agile and quite delightful in accommodating some fairly intricate and fast passages."

A life-long resident of San Joaquin Valley who was raised in a musical family, Hunt has played tuba since fourth grade. He's not sure where the initial attraction came from.

"It could have been that there was a children's record that had tuba on it," he said. "I don't know."

In fact, Hunt had to wait six months for the school to order and receive the instrument before he could begin learning it.

Hunt graduated in 1966 from University of the Pacific's Conservatory of Music, which is where he first encountered the Vaughan Williams concerto.

"I actually played it on my senior recital with piano accompaniment," he said. "But that was just a kid doing it."

Forty years on, he'll return to the piece as part of a career that's seen him teach brass in Chile for the Peace Corps, do a stint in the Naval Academy Band and serve more than 20 years with the Stockton Symphony.

"I'm really delighted to feature Doug," Jaffe said. "He's been, in so many different ways, one of the finest members of our musical community for so many decades."

In those years, the music available to tubists has changed. Since Vaughan Williams' concerto, several more have been written, even one by famed "Star Wars" composer John Williams. Such pieces also augment the wide range of tuba music that comes from transcribing music originally written for other instruments.

This story has been posted in the following forums: : Headlines; COS - Chile; Music