James Rupert writes: Musharraf May Use Election Delay to Foment Discord Among Rivals 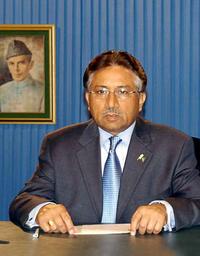 From now until the Feb. 18 elections, Musharraf will be "trying to sow divisions within the opposition,'' says Talat Masood, a retired general and independent political analyst in Islamabad, Pakistan's capital. It isn't clear how successful Musharraf will be at reducing the opposition's appeal, given the depth of anger over Bhutto's killing. Many blogs and commentators in Pakistan see the murder of Bhutto, the nation's most popular politician, as the work of Islamic militants, possibly backed by military-intelligence agents, which Musharraf denied Jan. 3. "The sympathy vote for Bhutto is not likely to diminish after six weeks,'' Jaspal says. Journalist James Rupert, head of Newsday's international bureau in Islamabad, Pakistan began his career abroad as a Peace Corps volunteer, teaching mechanics and welding in Morocco.

James Rupert writes: Musharraf May Use Election Delay to Foment Discord Among Rivals

Musharraf May Use Election Delay to Foment Discord Among Rivals

By James Rupert and Khalid Qayum

It also gives the military-backed government of President Pervez Musharraf -- and his intelligence agencies -- the opportunity to exploit long-standing rivalries between Bhutto's Pakistan People's Party and Nawaz Sharif's faction of the Pakistan Muslim League.

From now until the Feb. 18 elections, Musharraf will be ``trying to sow divisions within the opposition,'' says Talat Masood, a retired general and independent political analyst in Islamabad, Pakistan's capital.

Before Bhutto died, she and Sharif, 58, had settled enough of their differences to coordinate some election strategies. Anger over her killing has, at least temporarily, welded that coordination into an emotional alliance between the former fierce rival movements. The longer that alliance holds, the greater the risks for Musharraf, 64, a general who seized power in a 1999 coup and stepped down from his military post in November.

Sharif rushed to the hospital where Bhutto was taken after the suicide-bomb attack. He later traveled to her burial site and was hailed by her supporters. A united opposition, fueled by anger at Bhutto's death and sympathy for her party, might be able to capture enough parliamentary seats to change the constitution and dilute Musharraf's authority -- particularly his ability to dismiss an elected government.

``It appears that PPP and Nawaz Sharif's Muslim League are going to join hands after the elections to curtail Musharraf's powers or, if they have a two-thirds majority, they will impeach him,'' says Hasan-Askari Rizvi, an independent analyst and former political science professor at Punjab University. ``So Musharraf's original plan, to have an assembly that is divided and that he could manipulate, may be threatened now.''

Musharraf said last week the elections had to be postponed from Jan. 8 because the rioting that followed Bhutto's death destroyed election offices.

Scholars and analysts say Pakistan's military-dominated governments have historically used intelligence agencies to unite their civilian allies and divide opponents, especially during election campaigns. Their efforts to rule directly or maintain influence over nominally civilian governments have often have been directed against the Bhutto family.

In 1977, the army encouraged a protest movement after Bhutto's father, Prime Minister Zulfiqar Ali Bhutto, padded an election victory with the help of rigged voting. The army chief, General Mohammad Zia Ul-Haq, used the chaos as justification to overthrow Bhutto, who was executed in 1979.

In Karachi, the capital of Sindh province, Zia supported the formation of a party to rival the PPP among the Mohajir ethnic group, immigrants who came from India after the partition of 1947. After Zia's death, the army fostered the creation of a religious-oriented alliance, the Islami Jamhoori Ittehad, to oppose the young and popular Benazir Bhutto, with Sharif as one of its key leaders.

In 2002, when Abbas served as a senior police official in Musharraf's anti-corruption agency, he says the government offered to drop charges against politicians if they joined the pro-Musharraf party. He says army and intelligence officers also typically use state funds or promises of senior positions to bribe politicians to switch parties before elections. Bhutto's party says government officials have offered such bribes in recent weeks, while arresting thousands of its political workers.

Musharraf denied that accusation in a Jan. 3 news conference and said his allies were engaged in normal electioneering. ``Every party is involved in trying to pull people from other parties,'' he said.

A recent report by Bhutto's party about election preparations says local officials are using their facilities and government money to support pro-Musharraf candidates. In many districts, the report says, police are harassing opposition nominees ``to ensure success'' of Musharraf allies, and ``Military Intelligence sits in the offices of election officials.''

The report calls for a ``clear public order from (the) army chief and President Musharraf'' directing intelligence-agency personnel ``not to meet with candidates, campaign or approach election officials.''

The party says Bhutto was planning to give the report to two U.S. legislators visiting Islamabad, Republican Senator Arlen Specter of Pennsylvania and Democratic Representative Patrick Kennedy of Rhode Island, on the day she was killed.

Sharif's party echoes the PPP accusations. ``Everyone knows that the elections have been postponed to give more time'' to the main pro-Musharraf party ``for rigging,'' a senior party leader, Javed Hashmi, told the Lahore-based Daily Times newspaper.

Delaying the elections may also allow Musharraf and his allies to exploit fissures in the PPP following the loss of Bhutto, who ran the party and had herself proclaimed its ``life chairperson.''

Bhutto's husband, Asif Ali Zardari, 51, took control Dec. 30 and named the couple's son, Bilawal, co-chairman. Bilawal, 19, is too young to run for parliament and has left Pakistan to continue his studies at Oxford University in England.

``There is a chance of rift within the PPP because Zardari lacks the charisma and stature that Bhutto had for keeping the party united in all four provinces,'' says Zafar Nawaz Jaspal, assistant professor of international relations at Quaid-i-Azam University in Islamabad.

It isn't clear how successful Musharraf will be at reducing the opposition's appeal, given the depth of anger over Bhutto's killing. Many blogs and commentators in Pakistan see the murder of Bhutto, the nation's most popular politician, as the work of Islamic militants, possibly backed by military-intelligence agents, which Musharraf denied Jan. 3. ``The sympathy vote for Bhutto is not likely to diminish after six weeks,'' Jaspal says.

The best outcome for Musharraf may yet be the arrangement he appeared willing to make with Bhutto before she died, some analysts say: an eventual accord with her party, with the terms of any deal determined by their relative strengths in parliament.

``Musharraf will be quite prepared to share power with the PPP,'' particularly with Makhdoom Amin Fahim, the party's candidate for prime minister, says Khalid Mahmud, a research analyst at the state-funded Institute of Regional Studies in Islamabad. ``Fahim is a moderate man and he will be willing to work with Musharraf as well.''

When this story was posted in January 2008, this was on the front page of PCOL: