Tunisia RPCV Michael Sells, one of the world’s foremost experts on Islam, will join the Divinity School faculty this summer as the John Henry Barrows Professor of Islamic History and Literature 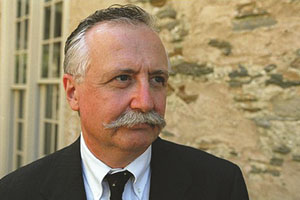 Tunisia RPCV Michael Sells, one of the world’s foremost experts on Islam, will join the Divinity School faculty this summer as the John Henry Barrows Professor of Islamic History and Literature

Members of the University community interested in the study of Islam are eagerly anticipating the arrival of Michael Sells, one of the world’s foremost experts on Islam, who will join the Divinity School faculty this summer as the John Henry Barrows Professor of Islamic History and Literature.

Sells’ appointment, which begins Friday, July 1, signals the birth of a serious program in Islamic studies at the University. He will join political scientist and scholar of modern Islam Malika Zeghal, Associate Professor of the Anthropology and Sociology of Religion, in reviving an eminent Islamic studies program.

“Since the untimely death of Fazlur Rahman in 1988, the University has lacked a central faculty presence around which to build a program in the study of Islam,” said Richard Rosengarten, Dean of the Divinity School. Rahman, the Harold K. Swift Distinguished Service Professor, was widely considered one of the world’s top scholars and interpreters of Islamic law. “It is very exciting to contemplate what might be accomplished again once Michael is here.

“He is without peer in his capacity to think about Islam as a religion,” Rosengarten continued. “In today’s world, Islam is so readily politicized and even aestheticized. Michael’s work staunchly and unswervingly accords Islam full status as a religious tradition. His work is marked by both a deep engagement with Islam on its own terms, and a principled willingness to bring Islam into conversation with other religions, especially its other monotheistic partners.”

After serving on the faculty of Haverford College in Pennsylvania since 1984, Sells is returning to Chicago, where he earned his A.M. in 1977, and a Ph.D. in 1982. In addition to his Chicago education, he earned his bachelor’s from Gonzaga University and spent two years at Stanford University as an Andrew W. Mellon postdoctoral fellow. Sells also served in the Peace Corps in southern Tunisia from 1972 to 1974.

“I had such a great experience myself as a graduate student at the University of Chicago that for me, coming back to the Divinity School just made sense. It seemed ideal,” Sells said from his office at Haverford College. “The University already has such strong programs in the languages and societies of Islam—in the Department of Near Eastern Languages & Civilizations, in the Center for Middle Eastern Studies, and in the various international areas—that it seems like a perfect fit.”

The author of seven books and more than 60 scholarly articles, Sells is widely lauded as the world’s top translator and interpreter of the Qur’an, an expert on Sufism and its poetry, an authority on apophaticism, and an important voice in discussions of contemporary Islamic politics.

Most recently, he co-edited and contributed to the forthcoming book The New Crusades: Constructing the Muslim Enemy , which probes the rise of anti-Muslim sentiment in the West and its relationship to anti-Western anger in the Islamic world, paying particular attention to the “clash of civilization” theory that posits an essential and unbridgeable conflict of values between Islam and the West.

He currently is finishing a book tentatively titled Jihad and Crusade: Religion and Violence after the Cold War .

Sells is perhaps best known for his 1999 book Approaching the Qur’an, a work that both Muslim and non-Muslim scholars have praised as a breakthrough in rendering the Qur’an in a way that avoids the confusion and the stiffness of standard translations. It has been described as demonstrating the importance of oral recitation in the Islamic tradition and in showing the relationship between sound and meaning in the Qur’an.

Sells also consulted for and participated in the acclaimed 2001 PBS series Islam: Empire of Faith.

He plans to teach four classes during the next academic year, including a course on Islamic love poetry, a subject on which he has written four books; a class on reading the Qur’an, which he said is similar to one Rahman taught while he was a graduate student at Chicago; an introductory course he calls “Expressions of Islam,” in which he will not define what Islam is or is not, but instead will “just touch on parts of a multifaceted tradition;” and a seminar on the writings of Ibn al-Arabi, a 12th-century mystic who wrote Islamic love poetry and who is the subject of a book he currently is researching.

“I don’t have a preset agenda,” Sells said of coming to the Divinity School and starting an Islamic studies program. “My view is that the University is so rich that what I’m hoping to do is just see what’s going on, and then work with what’s there and work with Professor Zeghal in the Divinity School and my other colleagues throughout the University to form a program. No one person can even look over the entire globe of Islamic studies, let alone map it out; the field is too rich, deep and dynamic for that. I’m just looking to play my part in the vibrant conversation already underway.”

This story has been posted in the following forums: : Headlines; COS - Tunisia; Islamic Issues; Religion

History of islam - islam way, religious education and lebanese culture.I always find something new and interesting every time I come around here - thanks.
http://roadtime.org/