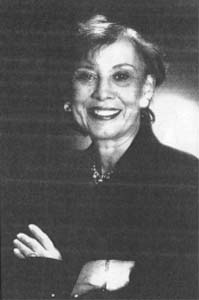 An unrelenting leader for Denver's Latinas

It's the misfortune of this dark-haired Colorado career woman to be first at the altar, which is covered with a brightly colored serape, and topped by flickering white candles.

Like a Dia de Los Muertos altar, this too will be created in honor of the ancestors, here at this year's first session of this year's training of the Circle of Latina Leadership.

"I was born in a little village in El Salvador," she begins. "My mother brought us here in the 1970s, during the revolution, when I was 14. We joined the Mexican immigrants picking grapes in California."

After a few more sentences about the migrant life, she's interrupted by Juana Bordas, who created this organization to develop community leadership in a new generation of Latinas.

"Not about the grape pickers!" she coaches the woman. "Tell about your mother!"

On this night, Bordas sees herself mirrored in these young Latinas.

She immigrated to the United States at age 3, traveling from Nicaragua with her parents and seven siblings in the hull of a banana boat. Rising from poverty, she is a leader in Denver's Hispanic community and has been inducted into the Colorado Women's Hall of Fame.

Earlier this evening, Bordas had instructed the Latinas to talk about their ancestors, especially the mothers and grandmothers, and then place a family photo on the altar.

So when the woman makes a second attempt at telling her story-but somehow ends up talking about the town of migrant workers-Bordas cuts her off again.

"Not the town! About your mother!"

Unfortunately, the third attempt also derails into something other than mother.

"It's a story of this woman," interrupts Bordas. "She left El Salvador because of the revolution! She had a vision for her children! Una mujer sola!"

"I didn't think of my mother's story," the woman says slowly. "I always thought I got my courage from my father, who left us when we were little. My mother had a third-grade education. She didn't speak English. But I do have to say she was a great woman who had a big influence on me."

Bordas beams, bestows congratulations, then launches into a teaching tale.

She learned this the hard way.

As a child, Bordas wasn't exactly proud of her immigrant mother-a woman with eight children, a fifth-grade education, no English language skills, and a low-paying job serving food in the cafeteria at the same Catholic elementary school where Bordas studied each day.

"I felt inferior," she says. "But you have to process your life, and instead of being embarrassed at who my mother was, I now look and see the strength of a great servant-leader who gave her life so that her children might have a better life. That is the essence of leadership."

Heads turn when Bordas strides into a room. It's not just her passion for brilliant colors-the turquoise and hot-pink business jackets. It's her verve and charisma.

Friends describe her as a magnet, a ball of energy, a person of "moxie" brimming with joie de vivre.

On a recent visit to Cuba with one of her three daughters, for example, her talent at salsa dancing-"four house bands every night!"-left the Cubans standing stock-still, watching in slack-jawed amazement and lavish with applause.

People frequently wonder where Bordas gets her energy. The self-described "social entrepreneur" always seems to be starting a new nonprofit, such as the Mi Casa Resource Center for Women in Denver, which she started in the late '70s to help low-income Latinas and youths with job training and life skills.

As president of Mestiza Leadership International, a Denver consulting firm specializing in multicultural leadership, she frequently crisscrosses the country to develop diversity in the workforce.

"The reason I have this energy is because I'm from the Caribbean coast of Nicaragua, so I'm Caribbean," she says. "I have a Caribbean energy that's very high-speed, almost Cuban."

This is the woman the Denver Business Journal in 2003 named one of its "Outstanding Women in Business," noting that "of the 10 new Denver City Council members, three completed Mestiza's leadership program, as did the first Hispanic to become a manager at Denver International Airport."

Mayor John Hickenlooper says he's one of her biggest fans.

"Long before I ever got into public service, she was creating visions and making sure they got realized," he says. "She's remarkably successful, both in what she says and what she does. I think she's a role model for a tremendous number of young women."

Three years ago, when Lourdes Estrada-

Salinero wanted to network after moving to Denver for a job as director of process and performance at Xcel Energy, she received some key advice from Cynthia Evans, the company's vice president for Colorado.

"She told me, 'If there's one Hispanic you have to meet in Denver's Hispanic community, it's Juana Bordas,"' recalls Estrada-Salinero. "That's everyone's perception of her. She's a mover and shaker, a change-agent for all Hispanics in this community."

"She's a great believer in Latina leadership, but also in women of color," says Lucille Echohawk, an American Indian who works as senior specialist of Indian child welfare at the Casey Family Foundation.

"We belonged to an informal group called Colorado Women of Color, and she was the heartbeat of that. Others like me would pitch in, but Juana was always the glue."

Her community activism includes serving on the advisory board for Federico Peña after he was elected Denver's first Hispanic mayor.

She was extremely helpful back then, Peña says, particularly her insights into life within the Hispanic community. And now, he credits her with being at the forefront of a plan to showcase state history in a new way.

"She's very involved in a project to create a Hispanic museum much like the Blair-Caldwell African American Research Library," he says.

"She's put a lot of time into thinking what it will look like, and talking to various community leaders and the Denver Public Library. It would be the first Hispanic museum to capture the history of generations of Hispanics in Colorado.

"Right now there's nowhere you can go to experience and learn about their enormous contributions - most people don't even know that the first Colorado constitution was actually signed by several Hispanic senators. She's been very much at the center of this."

Arguably, none of this would have happened if not for her Peace Corps experience during the 1960s. And that happened because back then, she says, she was the only Latina at the University of Florida.

"I was trying really hard to assimilate and fit in," she recalls. "One day I saw my political science professor walking with a group of marchers. I asked what he was doing, and he said he was marching to integrate the university. I said, 'Well, I'm getting in line."'

Her developing social consciousness triggered the realization that she didn't understand her own culture.

She decided to find out by going to South America with the Peace Corps. At the training camp in 1964, she met Carolyn Fineran.

"She's always been filled with vision," says Fineran. "She's just known from the beginning that she had a purpose in life and that she is here to make changes."

In Chile, Bordas taught women what's now called micro-enterprise. She ran a knitting co-op, started a baking co-op, and taught the women how to market.

The experience changed her life.

"It's where I integrated myself," she says. "I'm looking around this wonderful country, and seeing that everybody is Latino. And I'm looking at America, and I'd never seen a Latino professor, congressman, senator or president. So I know very clearly there's nothing wrong with my culture. I said, 'I'm not American, I'm Latin American."'

This realization, all those years ago, put her on the path leading to servant-leadership, which she now teaches everyone from young Latinas to high-powered corporate executives.

"My mission is to help with the birth of the multicultural nation," she says.

"It's helping people build a just and caring society-the kind of society where we all take care of each other, just like we used to do.

"For Latinos in my culture, people come before things. People, family, sharing, generosity-all are central. I'm enriched if I give to others."

This story has been posted in the following forums: : Headlines; COS - Chile; Hispanic Issues; Activism; Speaking Out; NGO's