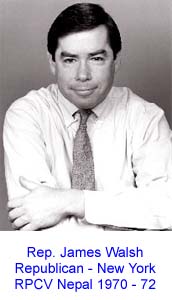 (April 25, 2005) — WASHINGTON — Rep. Jim Walsh, an Irish American who grew up in Syracuse as the son of the mayor, has distinguished himself in Congress in a way he never dreamed he would. He is the only member of the House or Senate to speak Nepali.

The 57-year-old congressman served as a Peace Corps volunteer in Nepal from 1970 to 1972 and has retained a love of the country and its people.

This month, he led a bipartisan group of 11 House and Senate members to meet with the Nepalese ambassador to the United States to express concern and disappointment over anti-democratic actions the country's king has taken in recent months.

According to the State Department, King Gyanendra has declared a state of emergency and "suspended almost all fundamental rights," including freedom of speech.

The king — who is supposed to be heading a constitutional monarchy — has said the dramatic measures are needed to protect the country from Maoist insurgents who kidnap, torture and kill innocent villagers.

But Walsh said the king should not strip law-abiding citizens of their rights in the fight against the insurgents.

The U.S. government has given nearly $22 million in military aid to Nepal since 2002, but Walsh questioned whether that should continue given the loss of civil rights.

Walsh said that as U.S. troops are working to bring democracy to other regions of the globe, it was important "to alert Nepali officials that, as U.S. government officials, we cannot condone these recent actions."

"Democracy in Nepal had slowly evolved over the last several decades, and it's been a painful process," Walsh said. "It's important that the kingdom not turn back now."

Walsh, who has served in the House nearly 17 years, said he is particularly distressed by the current chaos in Nepal because he remembers the country as a poor but peaceful and picturesque place.

"I lived in a little village with four thatched huts with mud floors — one of them was mine," Walsh said.

"I boiled water from the irrigation canal to drink. The only real sense of time we had was that a Thai jet flew over our village twice a week. Other than that, there was no real reason to know what time it was."

Walsh said he reveled in the kindness of the people and the beauty of the country: the clean, blue skies, the rice fields and banana trees and mango orchards, the river where he used to fish and the green mountains nearby.

His job was to teach scientific methods of agriculture, such as how to plant in rows, rotate crops, irrigate and use fertilizer so that farmers could increase their yield.

Walsh returned to Nepal for the first time about six years ago and met with some of the people he had known as a young Peace Corps volunteer.

"They were a lot older, and of course I was, too," he said. "It was wonderful re-connecting with some of the people from my village. Being there in the 1970s was such a transformational time in my life. I really saw the world for the first time. Before that, I had lived a pretty sheltered life."

Walsh, the son of former Syracuse mayor and congressman William Walsh, said most upstate New Yorkers don't have any idea of his work with Nepal and probably couldn't care less.

"I've been very involved in Ireland and I've got lots of Irish-American constituents who care about that," said Walsh, who chairs the Friends of Ireland, a bipartisan group of House members involved in Irish-American relations. "But you can't get people interested in Nepal. There are too many other things going on in the world competing for their attention."

"When the Peace Corps called to tell me I was going to Nepal, I said, 'That's great. Where is it?' I had no idea. But once you've been there, you don't forget it."