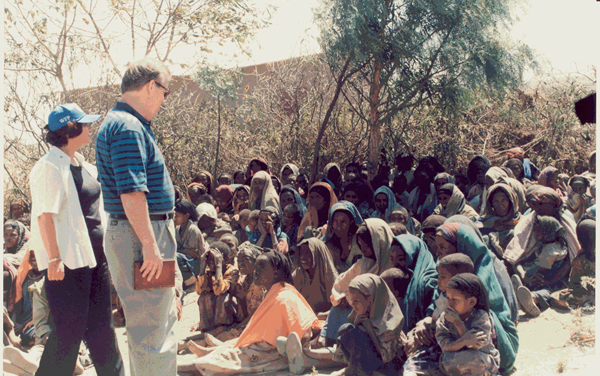 Tony Hall, U.S. Ambassador to the United Nations Agencies for Food and Agriculture, recently visited Uganda. He says parents in Uganda must take drastic steps to protect their children:

"I've been to about one-hundred-fifteen countries in the world and seen civil war and famine and lots of people suffering. But I have never seen thousands of children at a very young age, from four all the way up to seventeen, actually being urged by their parents to leave their houses [and hide during the day], to come in at night to sleep in someplace that is safe for them so they won't get abducted by this very hideous group."

Armed groups in the Congo, Sri Lanka, and elsewhere are also reportedly using girl soldiers. Even when the fighting ends, says the Save the Children report, "Girls returning home are often marginalized and excluded from their communities. They are viewed as violent, unruly, dirty, or as promiscuous troublemakers." "With no other means of supporting themselves," says the report, "many are forced to turn to sex work, making them ever more stigmatized and isolated."

In a recently released report, the Save the Children charity organization says that worldwide, three-hundred-thousand children have been conscripted as soldiers. Almost half of them are girls, some as young as eight years of age.

According to Save the Children, the Lord's Resistance Army in Uganda has kidnapped some six-thousand-five-hundred girls who are forced to act as soldiers, domestic workers, and sex slaves. Most were kidnapped in the northern part of the country. The Lord's Resistance Army is a rebel group under the leadership of Joseph Kony, a self-styled prophet with a vague message that calls for the overthrow of the Ugandan government and its replacement with a government based on the Ten Commandments.

Geoffrey Oyat is Save the Children's program manager in Uganda. Mr. Oyat says that the Lord's Resistance Army forces both young girls and boys to kill:

"Once abducted, the children are systematically taken through a series of orchestrated events which change them from victims to perpetrators because they begin to believe that the only place they have is with the Lord's Resistance Army."

President George W. Bush says, "Those who create these victims. . . .must be severely punished."

The preceding was an editorial reflecting the views of the United States government.

This story has been posted in the following forums: : Headlines; Figures; COS - Thailand; Diplomacy; Hunger; Children; Child Soldiers