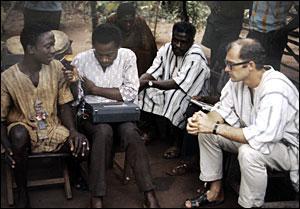 WATERLOO --- In Ghana, carved wooden stools are believed to house the owner's spirit.

Visitors to the "Iowa in Ghana" exhibition will find a carved stool --- and cultural anthropologist Dennis Michael Warren's spirit alive and well. The late Iowa State University professor's collection of photographs and artifacts commemorates his role in studying the native culture and development in Africa.

The African-American Historical and Cultural Museum in Waterloo is hosting the exhibit through June 30 on the eighth floor of the Black's Building, 501 Sycamore St.

"Dr. Warren was a pioneer in the use of a cultural area's indigenous knowledge of culture and economic development," said Susan Kueker, curator at the African-American Historical Museum and Cultural Center in Cedar Rapids, where the exhibition was first shown. "This is an area where it is assumed that many ancestors of most modern African-Americans came from ... and the exhibit gives Iowans an understanding of where African captives came from, who became slaves in the United States."

Selected video clips, contemporary cultural artifacts, including textiles and clothing, sculpture, gold weights, maps and more are featured. The exhibition was co-curated by Edward Miner, international studies bibliographer at the University of Iowa in Iowa City. Warren's extensive collection was donated to the University of Iowa Libraries by his wife and daughter.

Most of Warren's field work took place in the Brong-Ahafo region of Ghana. He first arrived in Ghana as a Peace Corps volunteer in 1964. Returning to the United States, he earned his doctorate in anthropology and began teaching at ISU in 1972 until his death in 1997. The anthropologist focused specifically on the Techiman Traditional Area, where he lived and studied for a span of 30 years. This area consists of the oldest existing traditional state of the Akan-speaking tribes in southern Ghana and the southeastern Ivory Coast.

Warren conducted in-depth, tape-recorded interviews with healers, traditional priests and chiefs. His studies led him to pursue research in art, culture, economy and traditional healing and medicine in Ghana and Nigeria and compare his findings to other societies.

In the past, Miner has said due to Warren's contributions, " the field of Indigenous Knowledge research would by the 1990s move from the margins to the mainstream of international development discourse."

"In this world of increasing globalization, it's important to know about other cultures. In general, Americans know every little about Africa," she said. "The display explains a culture completely different to ours."

Eventually pieces of the exhibition will be developed into an educational cultural kit which can be checked out from the International Studies department at U of I.

This story has been posted in the following forums: : Events; Headlines; COS - Ghana; Museums