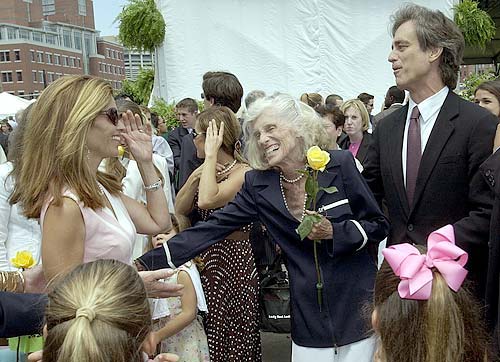 ''When the full judgment on the Kennedy legacy is made -- including JFK's Peace Corps and Alliance for Progress, Robert Kennedy's passion for civil rights and Ted Kennedy's efforts on health care, workplace reform and refugees -- the changes wrought by Eunice Shriver may well be seen as the most consequential,'' Harrison Rainie, author of ''Growing Up Kennedy,'' wrote in U.S. News & World Report in 1993.

By THE ASSOCIATED PRESS

BOSTON (AP) -- Eunice Kennedy Shriver, the presidential sister who founded the Special Olympics and helped demonstrate that the mentally disabled can triumph on the field of competition and lead rich and productive lives outside the walls of institutions, died Tuesday at age 88.

Shriver had suffered a series of strokes in recent years and died at a hospital on Cape Cod in the company of her husband, her five children and her 19 grandchildren, her family said.

''She understood deeply the lesson our mother and father taught us: Much is expected of those to whom much has been given,'' said her sole surviving brother, Sen. Edward Kennedy, who is battling a brain tumor.

She was also the sister of President John F. Kennedy and Sen. Robert F. Kennedy; the wife of 1972 vice presidential candidate R. Sargent Shriver; the mother of former NBC newswoman Maria Shriver; and the mother-in-law of California Gov. Arnold Schwarzenegger.

Shriver was credited with helping to bring the mentally disabled into the mainstream and transforming America's view of them from institutionalized patients to friends, neighbors and athletes.

Her efforts were inspired in part by the struggles of her mentally disabled sister, Rosemary, who was given a lobotomy at age 23 and spent the rest of her life in an institution.

At the time, those with mental retardation were often a secret source of shame to their families and were quietly put away in institutions, out of sight and out of mind.

Shriver revealed her sister's condition to the nation during her brother's presidency in a 1962 article for the Saturday Evening Post.

''The truth is that 75 to 85 percent of the retarded are capable of becoming useful citizens with the help of special education and rehabilitation,'' Shriver wrote. ''Another 10 percent can learn to make small contributions, not involving book learning, such as mowing a lawn or washing dishes.''

Realizing they were far more capable of playing sports than the experts said, Shriver in 1968 started what would become the world's largest athletic competition for the mentally disabled. The first Special Olympics -- a two-day event in Chicago -- drew more than 1,000 participants from 26 states and Canada.

Now more than 3 million athletes in more than 160 countries participate in Special Olympics. The games have given rise to countless uplifting stories of success against great odds.

''She believed that people with intellectual disabilities could -- individually and collectively -- achieve more than anyone thought possible. This much she knew with unbridled faith and certainty,'' said her son Timothy, chairman of the Special Olympics.

President Barack Obama said Shriver will be remembered as ''as a champion for people with intellectual disabilities, and as an extraordinary woman who, as much as anyone, taught our nation -- and our world -- that no physical or mental barrier can restrain the power of the human spirit.''

''Mrs. Shriver wasn't making cars, she wasn't selling houses, she was changing human lives. She taught me to accept me as I am,'' said Edwards, 35, who works as an athlete coordinator at Special Olympics headquarters in Washington and was an athlete from 1981 to 1999.

The Boston Red Sox played a video tribute to Shriver on the scoreboard between innings Tuesday, playing ''When Irish Eyes Are Smiling'' to a video of her throwing out the first pitch at Fenway Park and a message commending her work with the Special Olympics. It received warm applause from the sold-out crowd.

New England Patriots quarterback Tom Brady said Shriver was a great woman who set a great example for people around the world. Brady and some of his teammates have been involved for the past nine years with the Best Buddies program -- headed by Shriver's son -- that seeks to improve the lives of people with intellectual disabilities through one-to-one friendships.

Shriver was born in Brookline, Mass., the fifth of nine children to Joseph P. Kennedy and Rose Fitzgerald Kennedy. She earned a sociology degree from Stanford University in 1943 after graduating from a British boarding school while her father served as ambassador to England.

Her sister Rosemary learned to read and write with the help of special tutors and for a while had a lively social life of tea dances and trips to Europe. She and Eunice used to swim and sail together.

But as Rosemary got older, her father worried his daughter's condition would lead her into situations that could damage the family's reputation, and he authorized a lobotomy in the hope of calming her mood swings. She ended up in worse condition and lived out the rest of her days in an institution, dying in 2005.

Eunice was a social worker at a women's prison in Alderson, W.Va., and worked with the juvenile court in Chicago in the 1950s before taking over the Joseph P. Kennedy Foundation with the goal of improving the treatment of the mentally disabled. The foundation was named for her oldest brother, who was killed in World War II.

When JFK was in the White House, Eunice successfully pressed for efforts to help the mentally disabled. In 1961, the president signed a bill she championed to form the first President's Committee on Mental Retardation -- then handed his pen to her as a keepsake.

In 1953, she married R. Sargent Shriver. He became JFK's first director of the Peace Corps, was George McGovern's running mate in 1972, and ran for president himself briefly in 1976.

She was the recipient of numerous honors, including the nation's highest civilian award, the Presidential Medal of Freedom, which she received in 1984. Well into her 70s, she remained a daily presence at the Special Olympics headquarters.

''When the full judgment on the Kennedy legacy is made -- including JFK's Peace Corps and Alliance for Progress, Robert Kennedy's passion for civil rights and Ted Kennedy's efforts on health care, workplace reform and refugees -- the changes wrought by Eunice Shriver may well be seen as the most consequential,'' Harrison Rainie, author of ''Growing Up Kennedy,'' wrote in U.S. News & World Report in 1993.

Survivors include her husband, who was diagnosed with Alzheimer's disease in 2003, and the couple's children: Maria, who is married to Schwarzenegger; Robert, a city councilman in Santa Monica, Calif.; Timothy; Mark, an executive at the charity Save the Children; and Anthony, founder and chairman of Best Buddies International, a volunteer organization for the mentally disabled.

Sen. Kennedy joined other members of the Kennedy and Shriver families who gathered at Shriver's home for a private service Tuesday evening.