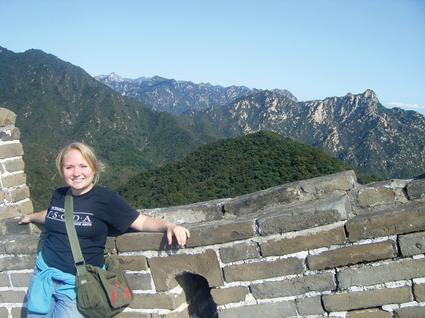 A more positive highlight of Nelson's stay in China was watching the televised opening ceremonies of the Olympics. She was at a security checkpoint as far away from Beijing as you can get without leaving China. Despite the distance, the Chinese there nearly burst with excitement and pride from their moment at the center of the world's attention. Their enthusiasm was contagious, and Nelson was thrilled when the bus she was riding took a 10-minute break so the passengers could find a TV and view the opening ceremony. "As the fireworks blasted off and the show began, I was almost brought to tears," she wrote at the time.

Students who adopted English names like Fish, Sunshine and Tomato.

The fervor and pride that burned throughout the vast nation when China hosted the Olympics. And an earthquake centered nearby that left nearly 90,000 people dead or missing and 5 million homeless.

For Nelson - a Pekin native - the good far outweighed the bad, and she's eager for more memories.

The daughter of Michele and Christopher Nelson of Pekin started a two-year term in the Peace Corps in 2007. A few months later, she arrived at Chengdu University in the Sichuan province to begin her assignment as an English teacher.

Nelson's two-year term will draw to a close in July, and she's looking to the future.

She had thought about signing up for more Peace Corps service but decided against it, in part because she didn't want to deprive another American of the experience.

"Peace Corps tries to allow for as many different people as possible to have a chance at living in, working in and learning about another culture for two years," she wrote in an e-mail to the Pekin Daily Times. "I want to give another American a chance to have the same wonderful, challenging experience I had."

When Nelson's enlistment is complete, she needs to turn her attention to paying her student loans, and she hopes to take formal lessons in the Chinese language. She hopes to line up paying work in Chengdu to fund these goals.

"After my Peace Corps service, I plan to travel and then come back to China as soon as I can to study Chinese and teach at local Chengdu kindergartens," she wrote. "So lately, I've been tutoring little children and volunteering my Friday mornings at several kindergartens to get experience."

In the long term, Nelson would like to find a way to incorporate the four passions in her life: dance, education, travel and China. The combination might add up to opening an English dance studio in China or teaching dance as a form of rehabilitation therapy. But these notions would take a lot of research and connections to come to fruition, she knows.

"I'd like to be in China at least long enough to become fluent in Chinese (whatever that means)," Nelson added. "But right now I'm just going to move one year at a time, because I want to leave myself open to any opportunities that may appear along the way."

Nelson is a 2002 graduate of Pekin Community High School, where she was a top student and a cheerleader. In 2006, she earned a bachelor's degree at Truman State University in Missouri, where she majored in English, minored in French and took advantage of various opportunities to teach dance, yoga and cheerleading.

She was aiming toward a master's degree when she shifted gears and shocked her family by signing up for the Peace Corps.

At the time, Nelson explained that she made the decision because she wanted teaching and cultural experience.

She got all of that in Chengdu, China's fifth-largest city.

When Nelson arrived there, her fair skin and blond hair marked her as a foreigner and, therefore, an object of curiosity.

She spent a few weeks living with a family where only the mother and teenaged daughter spoke English. One of her first tasks was to shop for a cell phone with the man of the house, who spoke no English. They bonded over the experience and eventually - with a combination of bewildering hand gestures and good humor - found a sturdy, cheap cell phone.

Early on, Nelson was exposed to some of the more exotic fare in Chengdu. She loved pig brains, didn't love cow stomach and didn't comment on bull penis, except to say she was tricked into eating it.

Now she knows what to eat and what to avoid. And she is so adroit with chopsticks that she could almost use them to tie her shoes.

At the university, Nelson found students who were talented, intelligent and excited. They also were patient and willing to play along with their teacher's sometimes quirky notions. And the students became her friends.

Nelson recalled a Christmastime gathering at her place.

"We all made and ate hot pot and exchanged gifts," Nelson wrote. "We managed to fit all 14 of us in my tiny apartment, but it wasn't uncomfortable at all. The young women in this group are the students I have become closest to. I truly see them as my little sisters."

She is awestruck by the progress she has seen in the university's English program.

"The secondary project that is taking up most of my life right now is Peace Corps China's first ever English musical, ‘The Pirates of Penzance,' " she wrote. "I was a dancer, and my sitemate was a musician and actor. So with our powers combined, we are taking Chengdu University by storm with a group of motivated English students who have been rehearsing six to eight hours a week to prepare for their performance."

Nelson said her worst teaching moment was the earthquake of May 12, 2008.

"This is how my life is gonna end," she thought.

Nelson's sister was visiting from the U.S. and had been in three earthquakes. She led the students out of the building, dodging debris that tumbled in the stairwell.

Nelson rates that as her least professional classroom moment, but whatever embarrassment that caused was overshadowed by the impact of the magnitude-7.9 temblor.

It was the deadliest earthquake to hit China in decades, the Associated Press reported, and the epicenter was only 50 kilometers away from Chengdu.

In the wake of the disaster, Peace Corps volunteers joined other organizations in activities to help earthquake victims, Nelson wrote.

"As volunteer English teachers, many of us have either visited the earthquake areas to teach the relocated students English or made lessons and gave donations to help the victims rebuild," she added. "Just last week, I went to see some of the damaged areas, and it broke my heart to see a country I've fallen in love with suffer so much pain."

Another volunteer founded a Sichuan Earthquake Sports Aid club, in which volunteers spend weekends with victims playing games with kids, teaching them English at the same time, according to Nelson. They held a half marathon to help fund the project, which attracted 30 runners - enough to call it a success.

The reminders linger. One person's jittery leg can make others in the room wonder if it's the start of an aftershock. Homeless quake victims are staying in temporary quarters set up on school playgrounds. About a month ago, Nelson saw whole mountainsides that are now brown because the quake had sent their once-green surface sliding to the valley below.

A more positive highlight of Nelson's stay in China was watching the televised opening ceremonies of the Olympics. She was at a security checkpoint as far away from Beijing as you can get without leaving China. Despite the distance, the Chinese there nearly burst with excitement and pride from their moment at the center of the world's attention.

Their enthusiasm was contagious, and Nelson was thrilled when the bus she was riding took a 10-minute break so the passengers could find a TV and view the opening ceremony.

"As the fireworks blasted off and the show began, I was almost brought to tears," she wrote at the time.

As her two-year assignment with the Peace Corps nears its end, Nelson naturally reflects on the experience. When she thinks about home, she realizes she has missed her family, friends, pets, champagne, Mexican food and a good haircut.

And when she thinks about leaving China, she knows she'll miss her friends, her host family and Sichuan food.

After two years of teaching in China, Nelson has learned a lot about that nation's language, food and people.

But one mystery remains.

"Why do Chinese girls wear high heels to climb mountains?" she wrote. "I still don't get it."

This story has been posted in the following forums: : Headlines; COS - China