Tim Wright said he became interested in Quechua when he was a peace corps volunteer in Ecuador during the late 1980s. When he returned to the United States he enrolled in the Latin American studies program at UCLA, and he studied Quechua with Daza from 1989-1991 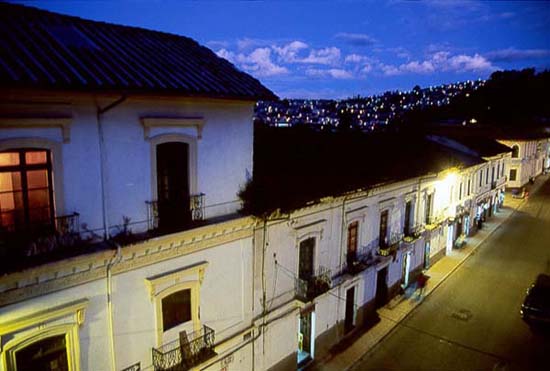 Tim Wright said he became interested in Quechua when he was a peace corps volunteer in Ecuador during the late 1980s. When he returned to the United States he enrolled in the Latin American studies program at UCLA, and he studied Quechua with Daza from 1989-1991

In a small classroom on the 10th floor of Bunche Hall, Jaime Luis Daza speaks to his three graduate students in a language that is rarely heard in North American universities. In a deep and sonorous voice, Daza forms phrases from long strings of suffixes and his students answer him in kind.

The words build outward from basic roots and, as Daza put it, become "kilometric."

The root mikhu: to eat, for example, becomes mikhuni: I eat; mikhusani: I am eating; mikhusarqani: I was eating; and mikhusarqaniña: I was already eating.

Daza and his students are speaking Quechua, an indigenous language of the Americas that originated with the Inca empire.

UCLA is one of only a handful of universities in the United States – and the world – that offers a Quechua language program.

When Daza arrived at UCLA, he revived the university's dormant Quechua program with Anderson's help, and he has been teaching the language ever since – for more than 20 years.

Some of Daza's former students, like Tim Wright, a doctoral student in anthropology, have leveraged their knowledge of Quechua into careers.

Wright said he became interested in Quechua when he was a peace corps volunteer in Ecuador during the late 1980s. When he returned to the United States he enrolled in the Latin American studies program at UCLA, and he studied Quechua with Daza from 1989-1991.

He went on to get a master's degree in public health, and, partially thanks to his knowledge of Quechua, received a Fulbright grant and a grant from the InterAmerica Foundation to study health programs in a rural Quechua-speaking part of Bolivia.

"If you want to be really accepted, for them to understand that you really care about their lives, to speak their language makes an incredible difference," the Los Angeles native said.

Wright described one instance when he wanted to help with agricultural work, but it was more difficult and complicated than he expected. The locals explained the skills to him in Quechua, and he was able to participate in and discuss the daily routines that structured their lives.

This story has been posted in the following forums: : Headlines; COS - Ecuador; Quechua

During Spring 2006 the international politics/current affairs journal New Statesman conducted a vote among readers for the top 50 heroes of our time. The definition of a hero: ‘A man or woman whose actions have been in the service of the greater good and whose influence is national or international: someone who is prepared to act in pursuit of a freer, more equitable and democratic future, without recourse to violence’.

The New Statesman is similar to the US-based international magazine Newsweek.

Plus UK post-conflict specialist also recognised in Top 50 Heroes of Our Time poll: see ‘Lesley Abdela’ below. More information on each name can be found on search engines such as Google.

The response, published as the magazine’s cover story, is ‘as surprising in its range and unpredictability as it was overwhelming’ though the first three are to be expected, world figures Aung San Suu Kyi, Nelson Mandela and Bob Geldof. No. 49 is leading theoretical physicist Stephen Hawking, and No 50, Andrew Flintoff, famous English cricketer.

Quite a few respondents thought the magazine meant ‘people for our time’ rather than people alive and active now, so Winston Churchill, Jesus and Marie Curie received a good number of votes.

Other women on the Top 50 list include American, Australian, Burmese, Irish and Russian.

Women voted into the top 50 Heroes of our Time:

Queen Elizabeth 11, most travelled head of state in history (33rd)

Bill Gates, Microsoft founder, with his wife Melinda one of the greatest philanthropists (8th)

The New Statesman wrote: ‘Among those who just missed out from the final 50 were Roméo Dallaire, the stoical head of the United Nations peacekeeping force in Rwanda at the time of the genocide in 1994; Subcomandante Marcos, the philosopher-rebel and one of the leaders of the Zapatista liberation movement in Mexico; the CND activist Bruce Kent; the comedian and birdwatcher Bill Oddie; the young man who defied the Chinese during the Tiananmen Square revolt of 1989 - the "unknown rebel", as readers called him; and, oddly, the American blue-collar rocker Bruce Springsteen. I was surprised that Archbishop Desmond Tutu of South Africa did not make our top ten. He is such a brave and admirable person whose sense of compassion and forgiveness are defined by his faith. But perhaps when people think of bravery and moral courage in South Africa they think first, and inevitably, of Nelson Mandela.’

Norway and the Nordics have an unparalleled reputation in the global struggle for the advance of women. UNFPA has advocated that one of the cross-cutting strategic priorities for the UN Peace Strategy must be Gender. Lesley has worked with the UNFPA on previous occasions in West Africa, Afghanistan, Indonesia and Turkey. In Kathmandu she is working from the office of the chief UN Humanitarian and Resident Coordinator.

The Common Country Assessment notes Gender discrimination is one of the root causes of almost all development challenges. The UN has more humanitarian programmes in Nepal than any other country.

Lesley's work in Nepal will include -

analysing mapping done of UNSCR1325 activities to identify gaps in gender programming in humanitarian action. 1325 was voted on unanimously by the UN Security Council in 2000 with the specific intent of increasing rapidly the number and reach of women in peacebuilding and post-conflict/CIMIC recovery. Worldwide it is largely honoured in the breech. UNFPA has taken a lead to advance the implementation of the recommendations of UNSCR1325 in Nepal.
proposing implementation of protection mechanisms, especially for IDPs and within the reintegration process
providing reports to the UNCT on identified gaps and priorities from the gender perspective to ensure a more stable peace process
reviewing humanitarian responses and proposals for the Nepal Government Peace Trust Fund and UN Peace Fund in Nepal (as a member of the Expert Group) for gender mainstreaming and sensitivity
providing briefings to key stake-holders and gender advisers in the UN and partner agencies
meeting with the Gender Focal Points of the Ministries and with relevant national civil society networks