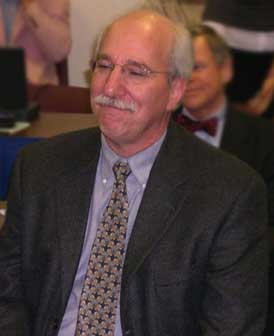 At the end of the school year, the award-winning teacher and longtime host of the television show Homework Hotline and its Science Challenge segment will move to Sterling, Va., to lead a new magnet school.

Taking the job "was the most difficult decision I ever had to make," said Wolfe, 53, who teaches at Wilson Magnet High School.

He couldn't resist the opportunity to develop the curriculum of the new Loudoun County Public Schools Academy of Science as he sees fit.

"In a way, it's every teacher's dream to do it from scratch," said Wolfe, who has been a teacher for almost 30 years. He has received numerous awards over the years and was inducted into the National Teachers Hall of Fame in 2004.

Since it premiered in 1990, Wolfe has been the host of Homework Hotline, which helps students Monday through Thursday. The show is produced at WXXI-TV (Channel 21) and shown on public broadcasting stations across the state.

"George really was the glue that held the program together," said Gary Walker, WXXI vice president of television.

The show made Wolfe a celebrity to students.

"His reputation is pretty widespread. Everybody's like, 'Oh man, that's the guy from Homework Hotline.' We knew of him even before he's our teacher," said Myra Mathis, 18, a senior at Wilson.

Wolfe's last live appearance on the show was May 12. The next season starts in September.

Though he won't be at the studio for the live broadcasts any more, he'll still be part of the program. He will appear on tape, presenting the Science Challenge portion of the show. Those segments will be recorded in advance during occasional visits to the Rochester area.

Close friend and fellow teacher Mike Occhino said Wolfe is "more than a teacher to his students. Kids know he cares about them as people."

Wolfe said the core of the Virginia academy's program will be a two-year physical science curriculum similar to the program at Wilson. It will emphasize getting students involved in scientific research. And he plans to include a sabbatical week when students will attend lectures, conduct research, take short courses and educational trips.

"My feeling is the programs in the school are only going to be limited by my imagination," Wolfe said.

The academy will start with a freshman class of about 60 students and will ultimately enroll about 250 students in grades 9 through 12.

Wolfe's wife, Judy, a biology teacher at Pittsford Mendon High School, will teach in the Loudoun County public schools. The Wolfes sold their Penfield home in early April and purchased a home in Loudoun County during spring break.

Carol Smith, a co-host of Homework Hotline, said she has mixed feelings.

"I know it's a wonderful opportunity for him, but it's a tremendous loss for Homework Hotline and for the City School District. ... I just can't imagine what it would be like going to the show and not seeing George there. That was half the fun of it for me, working with George."

Education: Bachelor's degree from State University College at Brockport in 1974.

Career: Served in the Peace Corps; taught in the Rush-Henrietta, Keshequa and Caledonia-Mumford school districts before arriving at the Rochester School District. Has been at Wilson Magnet High School since 1986.

Quote: "When they asked my if I would take the job (in Virginia), I said it depends on what the job description is because I do not want to be purely involved in administration. My strengths are in working with kids and working with other teachers."

This story has been posted in the following forums: : Headlines; COS - Congo Kinshasa; Secondary Education