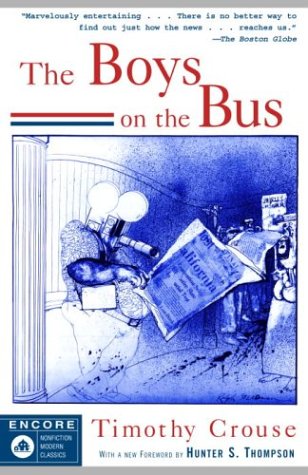 Timothy Crouse is an American journalist and writer.
Contents
[hide]

Crouse's attraction to campaign reporters and to the theater had its roots in his father, Russel Crouse, who was career newspaperman and playwright. "The stories he told me of his newspaper days—especially traveling around the country with prankish sports teams—had a fatal tinge of romance about them," said Crouse. [1]

His father's career in the theatre, began in 1928 as an actor in the play Gentlemen of the Press, in which he played Bellflower. He had turned his attention to writing and his first work with his long-time partner Howard Lindsay came in 1934, when the two men revised P. G. Wodehouse and Guy Bolton's book for the Cole Porter musical Anything Goes. "My father and Howard's trademark was a painstaking craftsmanship," says Crouse. "They spent months on an outline for a play, then worked on the dialogue, then rewrote and rewrote until everything was just right." [2]

Crouse got hooked on the theater when he saw Ethel Merman in the Lindsay & Crouse/Irving Berlin musical Call Me Madam when he was four years old. More than fifty years after his father collaborated on the original score, Timothy Crouse's revised libretto of Anything Goes would open on Broadway. [3]

Crouse is the brother of Actress Lindsay Crouse and also the grandson of Pauline Ives and John Erskine (the novelist and former Columbia professor).

Crouse served as a Peace Corps Volunteer in Morocco from 1968 to 1969. [4] Returning to the United States he wrote for the Boston Herald before joining the staff of Rolling Stone Magazine where he worked as a contributing editor from 1971 to 1972. [5]

[edit] The Boys on the Bus

Crouse is the author of The Boys on the Bus, a largely critical look at the journalists who covered the 1972 US presidential campaign. As a young Rolling Stone reporter, had been doing music stories but wanted to try his hand at political reporting. At a meeting of Rolling Stone staff in 1972, the only other writer interested in covering the election was Hunter S. Thompson, so Crouse latched onto him. "It only took a few days of riding the bus for me to see that the reporters themselves would make a great story," Crouse said. [6]

Crouse also profiled R.W. Apple, the legendary reporter and editor at the New York Time. Reporters "recognized many of their own traits in him, grotesquely magnified. The shock of recognition frightened them. Apple was like them, only more blatant. He openly displayed the faults they tried to hide: the insecurity, the ambitiousness, the name-dropping" and "the weakness for powerful men." [8]

David Broder and Robert Novak are also profiled in the book.

In the book, Crouse coins the term pack journalism. "The press likes to demonstrate its power by destroying lightweights, and pack journalism is never more doughty and complacent than when the pack has tacitly agreed that a candidate is a joke." [9]

After The Boys on the Bus, Crouse became the Washington columnist for Esquire Magazine and also wrote articles for The New Yorker and The Village Voice. [10]

In 1982 Crouse conceived the idea of reviving Anything Goes. He co-authored a new libretto for the musical with John Weidman that opened at the Vivian Beaumont Theatre on October 19, 1987, and ran for 784 performances. They re-ordered the musical numbers, borrowing Cole Porter pieces from other Porter shows, a practice which the composer often engaged in. ("Easy To Love" was from the 1936 movie Born to Dance.) In 2002 the musical was produced at the Royal National Theatre in London. [11]

Crouse has been working on fiction for the past several years and his story Sphinxes appeared in the Spring, 2003 issue of Zeotrope Magazine. [13]