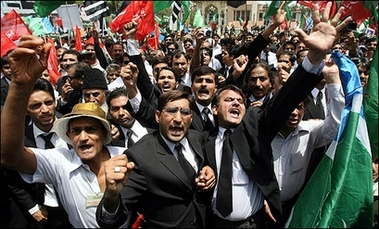 Caption: Pakistani lawyers chant anti-Musharraf slogans during a protest rally in Lahore. Thousands of people rallied against Pakistani President Pervez Musharraf Thursday for the first time since violent clashes in Karachi, as the military ruler headed to the still-tense city.(AFP/Arif Ali)

ISLAMABAD -- Last weekend's street battles and protest in the city of Karachi have damaged President Pervez Musharraf to the point that Pakistanis are talking openly about his departure from power.

Musharraf, a key ally in the Bush administration's "global war on terror," is trying this year to arrange an easy election for another five years in office. Since March, he has struggled to oust the man best placed to block him -- Pakistan's independent-minded chief justice. That maneuver has exploded into the deepest political crisis of Musharraf's eight-year, army-led rule.

Musharraf long has faced a challenge -- including two assassination attempts in 2003 -- from Pakistan's Islamic extremist groups. They condemn his reversal of the army's decades of support for them. That challenge has escalated with months of militant threats, suicide bombings and other attacks on police, Christian churches, girls' schools, music shops and other targets, mostly in the country's western, ethnic Pashtun region.

The country's judges are widely seen as rubber stamps for Pakistan's army-dominated executive branch. But last year Chaudhury, a little-noted figure, astonished Pakistanis, overturning the government's sale of a state-owned steel mill many saw as a sweetheart deal for friends of Prime Minister Shaukat Aziz.

Then, in a country whose military has for years had relatively free rein to detain citizens, Chaudhury began demanding that the government explain disappearances of dozens of men whose families say are being held by the army or intelligence services. He hauled government and military officials into court, ordering them to locate or release the men.

Chaudhury was weighing cases that could have directly challenged Musharraf's hold on power. One would bar Musharraf from simultaneously holding the top civilian and military posts. Musharraf has repeatedly promised, but then refused, to vacate his position as chief of army staff. Another would bar him from his plan to seek a new term from the outgoing National Assembly, which he controls through political allies, rather than a new parliament in the fall.

On March 9, Musharraf's aides summoned Chaudhury to receive an ultimatum to resign, his lawyers told the Supreme Court yesterday. When he refused, Musharraf suspended him, vaguely alleging nepotism involving the chief justice's son.

Protests began with small groups of black-suited lawyers. But televised images of police beating and bloodying them quickly drew larger crowds. When judges and lawyers in Karachi invited him to speak this month, the government warned Chaudhury to stay away. He went anyway and Musharraf blamed him for the violence.

In that, Musharraf is nearly alone, for commentators and ordinary Pakistanis say the government at least permitted, and perhaps covertly organized, the violence. "The government sent 15,000 police and soldiers into Karachi, but they stayed with their arms folded" while activists of a pro-Musharraf party, the Muttahida Qaumi Movement, shot protesters, said Arshad Majeed Khan, an office worker in downtown Islamabad.

Suspicion that Musharraf's camp was behind the deadly violence grew Monday when gunmen broke into the home of a top Chaudhury aide and killed him. Chaudhury's lawyers said yesterday the aide, Syed Hammad Raza, had resisted government pressure to testify against Chaudhury and planned instead to be a key witness for him.

The recent violence has increased the heat and anger around all discussion of Musharraf. And it has raised sudden, if quiet, talk that army officers -- the only constituency in Pakistan in a position to oust Musharraf -- also are unhappy with his performance.

"The army is simply reflecting the divisions of the rest of Pakistani society," said Talat Masood, a retired general and former Musharraf adviser who works as an independent political analyst. "The military feels humiliated by Musharraf retaining power," and by the tactics he has used to do so, Masood said. "The president is seen as losing control and conducting himself in an unbecoming manner. Eventually, as a result, below him [in the military], people will feel less constrained," he said.

This story has been posted in the following forums: : Headlines; Figures; COS - Pakistan; COS - Morocco; Journalism