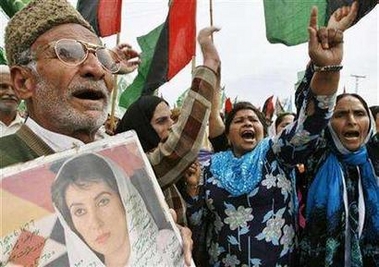 Despite broad public anger at Musharraf and spreading violence by Islamic militants, the administration sees him as its best bet for keeping and improving Pakistan's cooperation in the "global war on terror," say U.S. officials working on the region. It wants to see Musharraf win a new, five-year term as president, while permitting civilian politicians a real share of power, said the officials, who asked not to be named because they were not supposed to address the points publicly. Washington also wants Musharraf to retire as uniformed army commander by the end of the year, officials said. Journalist James Rupert, head of Newsday's international bureau in Islamabad, Pakistan began his career abroad as a Peace Corps volunteer, teaching mechanics and welding in Morocco.

Caption: Supporters of opposition Pakistan People's Party hold a portrait of former prime minister Benazir Bhutto as they chant anti-Musharraf slogans during a protest rally in Rawalpindi near Islamabad March 26, 2007. Bhutto has filed a complaint over what she said was the exclusion of millions of people from electoral rolls, saying polls held with the lists would be unacceptable. REUTERS/Mian Khursheed

ISLAMABAD, Pakistan -- The Bush administration Saturday repeated a call for "free and fair" elections in Pakistan, but stopped short of pushing President Pervez Musharraf for what many Pakistanis say are the necessary steps to achieve it.

As senior U.S. envoys visited here, State Department spokesman Sean McCormack stressed that Washington still backs Gen. Musharraf as "an agent for positive change," even amid the political turmoil here over his efforts to tilt the voting in his favor.

Despite broad public anger at Musharraf and spreading violence by Islamic militants, the administration sees him as its best bet for keeping and improving Pakistan's cooperation in the "global war on terror," say U.S. officials working on the region.

It wants to see Musharraf win a new, five-year term as president, while permitting civilian politicians a real share of power, said the officials, who asked not to be named because they were not supposed to address the points publicly. Washington also wants Musharraf to retire as uniformed army commander by the end of the year, officials said.

But America's No. 2 diplomat, Deputy Secretary of State John Negroponte, did not back calls by Pakistani political parties for Musharraf to resign his command before he faces election. In a news conference here yesterday, Negroponte said Musharraf "will himself want to decide" when to give up his dual military and civilian roles.

Diplomats familiar with the talks say Negroponte and Assistant Secretary of State Richard Boucher were silent on the political maneuver that would let Musharraf avoid a serious challenge for re-election -- and that helped set Pakistani politics on fire this spring.

By law, Pakistan must elect a new parliament this fall. The parliament, along with the country's four provincial legislatures, will serve as an electoral college to choose the new president. But Musharraf's aides have declared the presidential vote will be held first. That will let him seek an easy re-election by the lame-duck parliament, which came to office in tainted 2002 elections and is dominated by political clients of the president.

That election maneuver will face a Supreme Court challenge. So when Musharraf tried to oust the independent-minded chief justice this spring, Pakistanis erupted in protest at what is seen widely as an effort to steal the elections. In Punjab province yesterday, Chief Justice Iftikhar Chaudhury was mobbed by supporters as he drove to the latest of many rallies where crowds have demanded an independent judiciary, free elections and Musharraf's ouster.

While Pakistani judges typically have bowed to this country's military rulers, Chaudhury in the past year handed down rulings that forced authorities to reverse a corrupt sale of a state-owned steel mill and to produce scores of men secretly imprisoned by military intelligence. In March, Musharraf pressed Chaudhury to step aside, citing vague charges of corruption.

Chaudhury's refusal "gave Pakistanis a heroic symbol of resistance" to Musharraf, which they have lacked, said Rasul Bakhsh Rais, a prominent political science professor in Lahore. That symbol, plus leadership by Pakistani lawyers and and intensive TV news coverage, has built a protest movement that ranks as Musharraf's fiercest opposition since he seized power in a 1999 coup.

"The chief justice has shown he is a man of principle, and so people love him and want him to keep in his post and correctly bring rule of law to Pakistan," said Suleiman Khan, a salesman. "Musharraf is trying to twist the laws to keep power."

On May 12, 42 people died in Karachi when armed street gangs fired on anti-Musharraf protesters, setting off battles. TV images showed police ignoring the attacks and buttressed accusations that Musharraf's government tolerated or authorized the attacks.

When Musharraf ordered restrictions early this month on live TV news coverage, the U.S. response was muted. The State Department, which hotly condemned Venezuela's President Hugo Chávez for shutting an opposition TV station the same week, said simply that it was "watching closely" Pakistan's moves to restrict the media.

After the September 2001 attacks on America, Musharraf declared that he would create a moderate, enlightened Pakistan and crack down on Islamic militant groups, which Pakistan's military and government had nurtured secretly for years. But militancy has continued to flourish.

The ethnic Pashtun Taliban movement rules a swath of western Pakistan, using it as a base to attack U.S.-led forces in neighboring Afghanistan. Muslim radicals based at a mosque barely 2,000 yards from Musharraf's presidential office have kidnapped police officers, harassed shop-owners and threatened trials as part of what they say is their enforcement of Islamic justice.

The Bush administration knows that Pakistan's long-term stability requires that Musharraf's army-led rule ends, said a security analyst who works on the region for the U.S. government. But any change "will be a mess in the near term," said the analyst, who asked not to be named because he is not supposed to comment publicly on policy. He and Pakistanis such as newspaper editor Najam Sethi say the administration now seems to think the most manageable mess will be Musharraf remaining as president over an elected civilian government, with the country's most popular vote-getter, Benazir Bhutto, as the probable prime minister.

It is unclear whether Musharraf is ready to go along, said Sethi and Rais, the political scientist. The country faces "instability, uncertainty and further ... weakening of the regime," Rais said. Even if Musharraf is elected in some fashion, "the whole process will be challenged in the court," he said. "I don't think the present government will survive."


When this story was posted in July 2007, this was on the front page of PCOL: