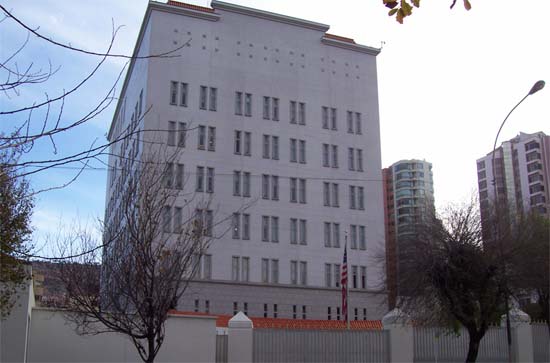 The president of Bolivia voiced strong concerns and a U.S. diplomat has been recalled to Washington in the wake of an ABC News report that the diplomat asked a Fulbright scholar and Peace Corps volunteers to "spy" on Cubans and Venezuelans in Bolivia. Bolivian President Evo Morales today called on the armed forces to safeguard Bolivia's sovereignty against "espionage attempts" by the U.S. government. On Sunday, Venezuelan President Hugo Chávez referred specifically to the allegations made by Fulbright scholar Alexander van Schaick. "The United States had to admit to espionage," the fiery Socialist leader stated in Caracas.

Bolivian President Calls on Armed Forces to Protect Against 'Espionage Attempts' by the U.S.

Caption: The US Embassy in La Paz, Bolivia.

Editor's Note: Jean Friedman-Rudovksy is a freelance journalist based in La Paz, Bolivia, where she is the correspondent for TIME Magazine and Women's Enews. She has worked as an associate producer for ABC News in Bolivia and is a founding editor of Ukhampacha Bolivia, an online bilingual Web journal on Latin American social and political issues.

The president of Bolivia voiced strong concerns and a U.S. diplomat has been recalled to Washington in the wake of an ABC News report that the diplomat asked a Fulbright scholar and Peace Corps volunteers to "spy" on Cubans and Venezuelans in Bolivia.

"The United States had to admit to espionage," the fiery Socialist leader stated in Caracas.

Van Schaick told ABC News.com that during a routine security briefing at the U.S. Embassy last November, Assistant Regional Security Advisor Vincent Cooper asked him to supply the embassy with information about Venezuelans and Cubans he should come across while carrying out his studies.

"I was asked to basically spy," he said.

The U.S. Embassy in La Paz released a two-page statement today repeating State Department responses that Cooper provided "incorrect information" to Peace Corps volunteers and to Fulbright scholar Alex van Schaick regarding their "contact with citizens of certain countries," in violation of long-standing United States policy not to involve Fulbright scholars or Peace Corps volunteers in any espionage activity.

"In no way have U.S. embassy personnel ever requested that Peace Corps participants or Fulbright academic program members participate in intelligence activities," the statement says.

The Bolivian government, though, is not convinced.

It's not as simple as saying this was a mistake," Minister of Government Alfredo Rada said yesterday in a radio address. "There need to be explanations," said Rada, adding that the Bolivian government would soon call on U.S. Ambassador in Bolivia Philip Goldberg to meet personally with several of Bolivia's top government officials to give his version of recent events.

Morales also made clear today that Assistant Security Advisor Cooper, the embassy official who reportedly gave the instructions to new Peace Corps volunteers in July 2007 and to van Schaick four months later, was no longer welcome in Bolivia.

"This man has not only violated the rights of [those he instructed], but has also violated, offended and attacked our nation," President Morales said in a speech from the city of Cochabamba. "As far as the government of Bolivia is concerned, he is not wanted here."

Cooper's unpopularity with the Bolivian government may only be an added headache for the embassy employee. The U.S. embassy says that "Cooper has been called back to Washington to be questioned," and that "the State Department will take appropriate action after an investigation has been carried out," according to their statement which was released around the same time as Morales' speech.

The embassy statement also expressed its "surprise and regret" that van Schaick went to the press with his denouncement, rather than approach the embassy or the Fulbright commission first.

"If he had done that, this situation would have been corrected immediately," it said.

Van Schaick told ABC News today that he stands by his decision to blow the whistle, noting that Peace Corps Deputy Director Dorene Salazar took the route that the embassy recommends, to no avail.

"The Peace Corps staff complained internally, and less than four months later, the problem arose again," says van Schaick, referring to the fact that peace corps official Doreen Salazar sent an e-mail complaining about Cooper's actions and was assured that the situation would be rectified. "Why would it be any different this time?" van Schaick said.

On July 29, 2007 Cooper gave a security briefing to 30 Peace Corps volunteers before their swearing-in ceremony, instructing them to report back to the embassy with information on the Cubans they meet, according to Salazar and several volunteers who were present. According to van Schaick, Cooper asked him to provide the embassy with information regarding Venzuelans and Cubans and gave him the reasoning, "We know they're out there, and we just want to keep tabs on them." The U.S. State Department claims that these instructions are a breach of U.S. policy.

This story has been posted in the following forums: : Headlines; COS - Bolivia; Safety; Intelligence Issues

This is exactly what I warned would happen back in 2002 when Bush got started with his 'Freedom Corps' Executive Order. See the story I helped produce here at:
peacecorpsonline.org/messages/messages/2629/7449.html

It was way back in 2002 that I got a petition targeted to RPCV Congressman Farr going to stop this sort of thing. As of January 2, 2008 the petition on Care2.com was automatically closed out with a little over 600 signatures which I will now be delivering to Congressman Farr (the timing is perfect, now). The petition read as follows:
Petition: PRESERVATION OF AN INDEPENDENT PEACE CORPS
Date: 01/02/2008
Location: www.thePetitionSite.com/takeaction/632965389
PETITION FOR THE PRESERVATION OF AN INDEPENDENT PEACE CORPS: RESOLVED,that we, the petitioners, demand of our government that the following be made law: That the Peace Corps shall remain an independent agency, --
That its applicants will remain to be screened, as they are now, to exclude former or present employees of U.S. and foreign intelligence
agencies through a National Agency Check and other means; and that this screening be more rigorously enforced via an immediate increase in funds and staffing, along with simultaneously allowing broader and more flexible policy options to effectively acheive the goal of enforcing the aforementioned screening without exception,
-- That the USA Freedom Corps,
the USA Freedom Corps Council, or any similar initiative, agency, or grouping of individuals, shall not vote or otherwise decide on the mission or policy of the U.S. Peace Corps, and that the U.S. Peace Corps shall retain the right to withhold information from the USA Freedom Cor ps Council, pursuant to Section 3(f)(iii) of the Presidential Executive Order establishing the USA Freedom Corps, or pursuant to any request
to provide the aforementioned Council with relevant information. --
This petition is made in the spirit of and in accordance with the
people's first and tenth Amendment rights. Presented this ___ day of
_____, _____. (Signatures)