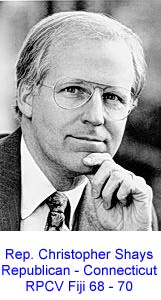 "The 2008 elections are generating unprecedented interest in the political process, especially among our young voters," Bysiewicz said. "This latest surge in voter registration keeps Connecticut on pace for a record 90 percent voter turnout in November." There are currently 1,923,848 registered voters in Connecticut, including a minuscule 1,772 Green Party members and 47 members of Connecticut for Lieberman, the vestigial ballot line used by U.S. Sen. Joe Lieberman to win re-election after he lost the 2006 Democratic primary. Congressman Chris Shays of Connecticut served as a Peace Corps Volunteer in Fiji in the 1960's.

In fact, if city Democrats in Bridgeport, Norwalk and Stamford show up on Election Day in a tide of anticipated statewide urban support for Sen. Barack Obama, Shays' narrow 5,747-vote margin of 2006 could evaporate into a forced political retirement.

State Democratic officials see the numbers as a chance to end Shays' 27 years in office, the last two of which as the only Republican House member from a New England state.

Republicans, however, say that Shays, with a well-earned reputation as a maverick, is poised to survive another election season because the district understands and appreciates his service.

Traditionally, unaffiliated voters outnumber Democrats and current statewide totals still hold true, with 801,002 unaffiliated; 707,885 Democrats; and 408,376 Republicans, with registration open until Oct. 28. But statewide this year, more than 47,000 new voters have declared themselves Democrats, compared to 38,000 unaffiliated and 14,000 new Republicans, Secretary of the State Susan Bysiewicz announced on Friday.

In Washington on Friday, Congressional
Advertisement
Quarterly changed its assessment of the 4th District race from leaning Republican to a toss-up. It further casts doubt on Shays' ability to win re-election in a year when Obama is creating the kind of excitement among Democrats that wasn't there during the congressional election of 2006, when Democratic turnouts were low in Bridgeport, Norwalk and Stamford.

During the 2004 race, the district, like the state, voted for Democrat John Kerry, although Shays won re-election by more than 14,000 votes.

"The 2008 elections are generating unprecedented interest in the political process, especially among our young voters," Bysiewicz said. "This latest surge in voter registration keeps Connecticut on pace for a record 90 percent voter turnout in November." There are currently 1,923,848 registered voters in Connecticut, including a minuscule 1,772 Green Party members and 47 members of Connecticut for Lieberman, the vestigial ballot line used by U.S. Sen. Joe Lieberman to win re-election after he lost the 2006 Democratic primary.

In Washington on Friday, Congressional Quarterly Politics said that Jim Himes, of Greenwich, a former investment banker expected to win the Democratic primary on Aug. 12, can bring a "serious challenge that will be aided by coattails from the presidential race."

The CG Politics report predicted that since one-third of Bridgeport's population is African-American it should come out strong for Obama and help Himes, whose $2 million in campaign funds raised as of June 30 equals Shays' war chest.

"It's ominous for Congressman Shays," said Gary L. Rose, chairman of the Department of Government and Politics at Sacred Heart University in Fairfield. "In 2006, Bridgeport voters didn't turn out very well, but Bridgeport could make an important difference this time because the dynamics are different."

Rose, whose latest book is titled "Connecticut Government and Politics: an Introduction," said Shays is a survivor and shouldn't be counted out until the votes are counted.

"His political obituary had been written the last time, too and he's very skillful at forging coalitions in his district and he takes positions that are favorable to Democrats as well," Rose said in a phone interview Friday. "He's really one of a kind."

Still, Obama's support could lead to Shays' ouster. "So much of it depends on Shays' ability to present himself as differently from other Republicans. While favoring the war could work against him, the economy could work to the congressman's advantage," Rose said.

Rose pointed out a growing tendency among voters to stay within party lines down the entire ballot, which could hurt Shays, who will depend on split tickets.

Scott McLean, chairman of the Political Science department at Quinnipiac University, said Friday that over the last six years it has become increasingly difficult for Shays to hang on.

"I think it'll be close," said McLean, who next month will take a dozen Quinnipiac students to the Democratic National Convention in Denver. "I think just because most people around the state have been Democrats and there's an effort to gain Latino voters, that can't be good news for Shays, who has managed to hold on to that district by appealing to both parties."

McLean said that it ultimately depends on Himes to emerge from the summer primary season and run a high-profile campaign against Shays.

"The trends have been favoring Democrats for the last two election cycles," McLean said. "Sooner or later the Democrats will come up with the terrific candidate and the right timing to knock him off, but if Shays can survive this cycle, he's probably in good shape for 2010."

Nancy DiNardo, of Trumbull, chairwoman of the Democratic State Central Committee, said Friday that the registration numbers bode well for a change in the 4th District.

"I think it's exciting that people are choosing to become Democrats even over unaffiliated voters," she said Friday. "I believe it's the way the country has gone under the Republicans. Everyone is hurting because of gas prices, the war and the economy and they are recognizing the need for change."

DiNardo said she expects big turnouts in cities throughout the state and that Himes is doing the right things.

"He's been visiting towns and talking to people," DiNardo said. "Last month he did a walk from Greenwich to Bridgeport. He has certainly been all around the district."

She recalled that back in 2004, Diane Farrell, the Democratic challenger, did not get enough support from national Democratic leadership and that in 2006, Republican Gov. M. Jodi Rell ran strong and helped Shays.

Chris Healy, chairman of the Republican State Central Committee, said Friday that he expects more Democrats to register and show up at the polls, but he's sure that Sen. John McCain of Arizona will run strongly in the state and Shays will win re-election.

"Chris Shays is working as hard as he ever has and the voters in the 4th District support and appreciate what he has done," Healy said. "He's worked hard in places where Republicans don't do well and that includes the cities."

"People see federal leadership and are sufficiently angry that they're going to vote with people who understand, whether it's the banking crisis, or energy prices and see it's not the Republican's fault," Healy said.