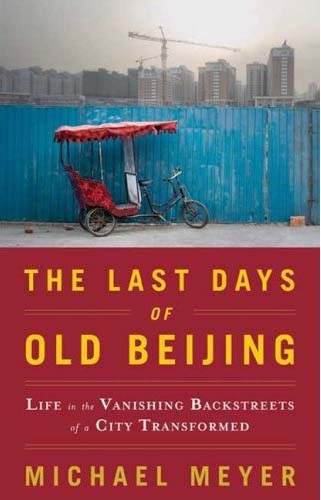 Meyer does an admirable job of condensing Beijing's history into manageable chunks of fascinating background information, enhancing the story being told. He dedicates four of the 21 chapters to recounting the city's past, starting from when "the land belonged to dragons" and progressing up to the industrialization of the Maoist period and the beginnings of state ownership of homes.

The Last Days of Old Beijing

Life in the Vanishing Backstreets of a City Transformed

The ghost of Robert Moses, that famous rearranger of New York neighborhoods, must be happy with the architectural shenanigans that have been transpiring in Beijing. City officials in their great leap toward modernity have, since the 1990s, forcibly relocated more than 500,000 residents of Beijing's central city to high-rise apartments on the outer edges of the city.

The fragile and intricate web of life that developed over generations in the low-slung wooden houses is rapidly being obliterated. What some have called the authentic Beijing is being replaced with Starbucks, McDonald's, KFCs, Pizza Huts and Hooters. This tale of corporate urbanization is nimbly told by Michael Meyer, an award-winning travel writer and former Peace Corps volunteer who moved into one of the neighborhoods scheduled for destruction.

Dazhalan, or "Big Fence," sits on valuable land. City fathers hope to spiff up much of the central city for the 2008 Olympics, and Meyer's neighborhood is close to the tourist attractions of the parliamentary Great Hall of the People and Tiananmen Square. The neighborhood's eastern border is the road "connecting the Front Gate's towers to the Temple of Heaven."

While teaching English to grammar school students, Meyer moved into Dazhalan. Settled more than eight centuries ago, it's one of the densest concentrations of humans on the globe, containing 57,000 people in an area the size of Vatican City. The neighborhood is home to seven temples, 3,000 homes, 1,500 businesses and 114 hutong.

The dense clusters of courtyard homes are connected by hutong or narrow interior walkways. Meyer explains the word hutong is derived either from the Mongolian word meaning "water well" or "a path between tents," or the Chinese word for the "narrow passageways that served as firebreaks in Kublai Khan's thirteenth-century capital."

Meyers writes that "In 1949, a survey recorded more than seven thousand hutong. Shaded by rows of leaning locust trees, many were too narrow for vehicles to enter. The network of backstreets connected neighborhoods of walled courtyards and also formed an elongated public marketplace, where itinerant peddlers and performers worked door-to-door."

The erasing of these ancient conduits is happening quickly and with little protest. "In a period of the late 1990s, an average of six hundred lanes were destroyed each year," and by 2005 estimates, only 1,300 remained in the entire city.

What were once vibrant though Meyer does admit, decaying enclaves, are transformed into kitschy re-creations of the older neighborhoods. Or the area morphs into a huge climate-controlled mall linked by car-choked streets so wide elderly pedestrians have been observed "stranded halfway across after the light had changed."

No longer linked together by hutongs, these interchangeable gated communities in the central city are generally above the price range of those forced to move. Along with lifestyle amenities such as yoga classes, bilingual kindergartens, red wine and cheese, these come with incongruous names such as Portland Garden, Dating Bright California, and Manhattan Garden.

Meyer does an admirable job of condensing Beijing's history into manageable chunks of fascinating background information, enhancing the story being told. He dedicates four of the 21 chapters to recounting the city's past, starting from when "the land belonged to dragons" and progressing up to the industrialization of the Maoist period and the beginnings of state ownership of homes.

In 1949, at the Founding of the People's Republic of China, 77 percent of Beijing's 1.2 million homes were privately owned. By 1978, 90 percent of China's housing stock was either owned by the state government for worker housing or administered by local housing bureaus.

In one of the most fascinating chapters, "Preserving a Sense of Place," Meyer deftly explores the complex cultural issues surrounding Beijing's lack of architectural preservation policies, reminding readers that this is an ongoing situation and not merely a response to the Olympics. He also explores how other cities such as Paris, Amsterdam and Rome have responded to the pressures of modernization, comparing those cityscapes to the new Beijing.

Through his skillful weaving of his professional experiences with his intimate encounters with neighbors, "The Last Days of Old Beijing" is as much a chronicle of the physical transformation of the city as it is a tribute to the inhabitants of his beloved hutong. {sbox}

This story has been posted in the following forums: : Headlines; COS - China; Writing - china