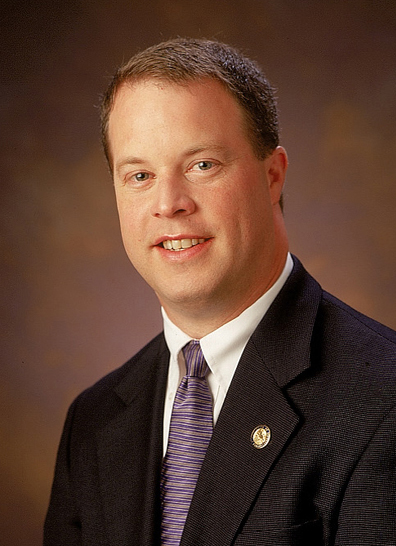 About 50 family members, friends and supporters of Rep.-elect Steve Driehaus gathered in his new office today to watch Cincinnati's newest congressman be sworn in. Senegal RPCV Steve Driehaus was elected to Congress in 2008. Driehaus had served in the Ohio House of Representatives since 2001 and has served as Minority Whip since 2005.

You can call him Congressman Steve Driehaus now. House Speaker Nancy Pelosi, D-Calif., just administered the oath of office to the whole U.S. House at 2:25 p.m.

Driehaus, standing with his right hand raised and his three children sitting behind and beside him, said: "I do."

About 50 family members, friends and supporters of Rep.-elect Steve Driehaus gathered in his new office today to watch Cincinnati's newest congressman be sworn in.

The office was decorated with the Driehaus campaign signature purple and yellow colors, in the form of balloons.

And although the new lawmaker and his staff just moved in yesterday, there were already a few photos on the walls - Driehaus with his family, Driehaus with President-elect Barack Obama, two photos of the Great American Ballpark where the Reds play and a map of the 1st District.

Driehaus then went to the House floor where he was to be sworn in with his freshman class this afternoon. The crowd in his office was watching him via C-SPAN on TV sets in his new office.

"It's a nice crowd. Everyone is excited. We're only missing his dad but he's here in spirit," Driehaus' wife said.

This story has been posted in the following forums: : Headlines; Driehaus; COS - Senegal; Congress; Politics