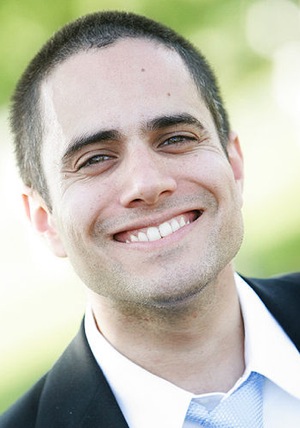 Talking to the Man Behind the Tiger: Rajiv Joseph

Somewhere there may be a dentist with the same name. Joseph, when contacted via email was quite clear about it. If he were a dentist, he would be substandard. As a playwright he is above the usual standard, having won a Paula Vogel Playwriting Award in 2008 for emerging playwrights. His play "Bengal Tiger at the Baghdad Zoo" was chosen as one of two outstanding plays.

Of course, I did have to ask because after all, it was written on the Internet.

JOSEPH: I am not, and have never been a dentist.

Q: You are listed as an Asian American playwright, just what is your ethnic background and how does that, if it does, influence your world view?

JOSEPH: My father is from India and came to the U.S. when he was 18. My mother is half German and half French, although her European roots go many generations back. She grew up in a very rural town west of Cleveland.

Being of mixed race and of Indian descent has influenced my writing, but just as any part of one’s identity can influence their creative work.

My first play, “Huck & Holden” is about an Indian college student who has just arrived in the States, and that play is based largely on a story my father told me about an experience he had when he first came to this country. So that play was a direct result of my father’s experience.

Q: Why did you join the Peace Corp? What did you do in Senegal and was that your first choice of where to serve?

JOSEPH: Since I was in high school I had wanted to join the Peace Corps. I had 3 teachers in high school, all history teachers, who had served in Peace Corps in Africa, and their stories were always of great interest to me. Additionally, my aunt served in the Peace Corps and met her husband there. So it always seemed like a cool idea, and the main thing pulling me towards that was the promise of adventure, which I got.

I was an agriculture volunteer in a rural village just north of the Gambian border called Koular. I lived there for two years, and then did a 3rd year in the city of Kaolack.

When I applied they gave me 3 options, and Senegal was one of them. My reasons for choosing it had more to do with dates of departure than any specific interest in the country. But I lucked out, because Senegal is a beautiful and fascinating place.

Q: What did you bring back from your experiences there? Is there an experience that stands out from the three years?

JOSEPH: Being in Senegal, more than anything else in my life, made me into a writer. It was my primary form of therapy. Living in a remote village, far from anyone who spoke English, my journals were my way of thinking about what I was thinking about, if that makes sense. I wrote in my journal every day, and still have a bookcase filled with them from my years over there. That routine has more or less stayed with me, and helped me develop my confidence as a writer.

There are too many experiences to count, and too many to single out. I can say that whatever happened to me over there influences a huge part of who I am now. To the point that, in spite of my volumes and volumes of journals, I’ve never been able to write about Senegal very well since returning home. It’s too close to me.

Q: Why do you go to Romania with the ESF?

JOSEPH: I went to Romania but I didn’t go to Romania with ESF. That inclusion of ESF on my Wikipedia page is another example of some of my less-than-refined friends messing with the page, just like my substandard dentist practice.

I went to Romania as part of the Lark Play Development program. The Lark, among other things, connects artists and playwrights from several different countries, and I’ve also gone to Mexico City as a result of my participation in the Lark. Bengal Tiger was translated into Spanish and there was a staged reading of that play in Mexico City 3 years ago.

I went to Romania for the first time last fall to participate in a workshop of "Bengal Tiger," which had been translated into Romanian. Their plans to produce that play were put on hold when they instead decided to produce another play of mine called “Animals Out of Paper”. I was able to go back to Romania this past month to attend the opening night of that play. It was an incredible experience to watch that play performed in a different language (one I don’t understand) and also to see them take a beautiful and totally different approach to the play.

Q: Have you been surprised at the reactions and reviews to "Bengal Tiger at the Baghdad Zoo"?

JOSEPH: When a play has its premiere, you have no idea how people are going to react. Especially in my case, in which I was re-writing parts of it up until opening night, and I went through a wonderful, but intense, 5–week reherasal process, questioning so many things about the play. So when it finally opened and people actually liked it, it wasn’t so much a feeling of surprise, but relief.

For more insight into the process see the blog entry.

Q: To you, what is the story about?

Q: Why Uday and not Saddam?

JOSEPH: A couple of reasons. First, some articles I read about Uday possessing gold-plated firearms really grabbed my attention and then made their way into the play.

However, the more I read about Uday, the more interesting a character he was to me. A spoiled prince, a playboy whose acts of cruelty seemed more random and more frightening than even that of his father. I don’t see the ghost of Sadaam taking the time to torment his former gardener. But Uday… he would delight in such things.

Q: What do you hope that the audience will come away with?

JOSEPH: I guess I hope an audience comes away from the play thinking about it and talking about it. The plays that touch me and move me and disturb me always stay with me for a long time. That would be my biggest hope, to have an audience member thinking about what they saw and heard a day or week or month later.

Q: From the CurtainUp Review...the critic commented that: "Kaufman and Joseph intersperse the surreal with plenty of shock value and even some dark humor." Did you feel you included things for "shock value"?

JOSEPH: I don’t think anything in this play is included for shock value, and I don’t think Moisés ever staged anything to that end either. The fact is, this is a play about war, cruelty, a tiger, Uday Hussein, post-traumatic stress disorder, the rape and murder of a young girl and Iraq. Don’t you think the basic actions in a play about these things may include some shocking moments? The value of that shock is not attached afterwards, like a ribbon.

Q: Also, that reviewer found: "What's unfortunate is that the playwright feels compelled to have his (mostly deceased) characters spell things out with such a heavy thematic hand." Do you think that reviewers understood the theme?

JOSEPH: I don’t really know what this reviewer was referring to.

Q: Did you feel that you were making a choice between "intellectual curiosity" over "emotional involvement"?

JOSEPH: Not really. That doesn’t seem like an either-or decision. My intellectual curiosity about the tiger, Iraq, Uday, gold firearms, translation and lepers led to an emotional involvement in the work.

Q: Why did you feel it important to have some of the characters speak Iraqi Arabic?

JOSEPH: This is a good question. The usage of Iraqi Arabic in this play is vital, for many reasons.

First: The play takes place in Iraq, in Baghdad. People speak Iraqi Arabic there. So on one level, this is just a realistic thing to happen.

But beyond that, I feel that much of this play is about the act of translation, and how within this act, so much confusion can occur. We see in the 3rd scene of this play how simple questions get mangled in translation and lead to anger and frustration and fear.

Additionally, it was important for me to have scenes in this play where 3 characters stand on the stage and we see and hear them attempt to communicate in these two different languages. Resistance to trying to understand someone else lies beneath so much of our misadventure in Iraq.

Q: Why did you feel it was important to include what one reviewer called "salty language"?

JOSEPH: I assume by “salty” this person means profanity, of which there is a lot. But in war, and in heightened, stressful situations, people, especially young American men, tend to use profanity.

The tiger also has his fair share of curse words, and this I must confess was just an artistic choice (because who knows how tiger would sound if they spoke?). The fact is, I speak a brand of Americanese that values the poetic quality of the profane. I understand some people bristle at such language and they should be assured that my mother has already cast her complaint and requested a future play without so much swearing.

Q: One reviewer compared this play to Wim Wenders' "Wings of Desire" for it's magical-realism. What do you see as your major influences beyond the inspiration coming from the short newspaper article?

JOSEPH: In my junior year of college, my roomate and I went to see the newly-released “Pulp Fiction” over and over, taking notebooks into the theatre and writing down the lines we heard. Somehow I think that experience is part of this. The novels of Salman Rushdie had a very early influence on me, particularly while I was in Senegal. More recently, and more directly infused into the writing of this play was Erroll Morris’ documentary “Fast, Cheap and Out of Control”. And while in rehearsals, Moisés and I would often speak about “Angels in America”, a play that will never stop inspiring me.

This story has been posted in the following forums: : Headlines; COS - Senegal; Theatre; Writing - Senegal; Iraq